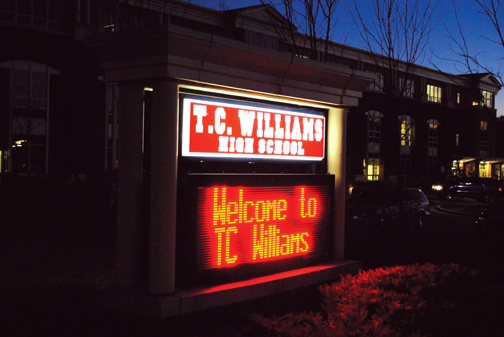 I am a homeowner in the Seminary Community, which is directly adjacent to T.C. Williams High School and athletic field.  As a matter of fact, my backyard, as well as those of many of my neighbors, is separated by a fence from the field, the scoreboard being directly over the fence from my backyard.

It is particularly appalling to my neighbors and me that the City of Alexandria is attempting, once again, to disrupt our community and negatively impact our quality of life by installing lights on the athletic field, which they have now designated as an all-city stadium.

We are not opposed to night games for the students of the high school, but we are adamantly opposed to the noise pollution, traffic and general disruption that would be caused by the ongoing nightly use of the field.  Even without being told, we are not so dense as to imagine that the revenue outlay for this stadium renovation would not drive its use on any and all occasions to the fullest extent possible.

In a city known on its face for the preservation of historical places, it is deeply disturbing that the determination has been made to once again intrude upon the lives of this very old, stable, mainly African-American community.  Post-Civil War, our great-grandparents, grandparents and parents built residential communities in this area with schools and churches and maintained them until forced to move through the use of eminent domain.

After the original T.C. Williams High School was built in the early 1960s, most residents returned to the newly structured neighborhood and continued to build a thriving community. Most recently, around 2005 when the old school was demolished and the new one was built, we took the accompanying annoyances and inconvenience in stride.

Now, however, we are once again told to accept the determination of school board and city officials that our backyard is the only suitable site in the City of Alexandria for this stadium. This in spite of the development special use permit agreed upon between the city and community many years ago stating that there would be no lights on the field.  We reject that determination on the grounds that we wish to be – and deserve to be – left in peace.  As there are other areas just as conveniently located and away from direct contact with any established neighborhood, we question why there is this determination to ram this stadium down our throats.

As always, the members of our community are willing to work with all parties toward a viable alternative to the T.C. Williams all-city stadium.

The health and well-being of our families are at stake, and it is unacceptable that our concerns are being ignored.