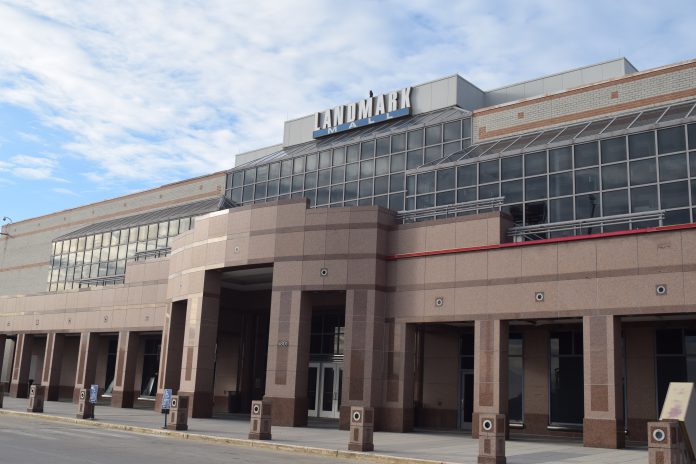 While the timeline for the redevelopment of Landmark Mall is still unclear, the nearly vacant shopping center could find a new use in a matter of months.

Alexandria’s Carpenter’s Shelter is negotiating with the Howard Hughes Corporation, which owns the majority of Landmark Mall, to occupy a portion of the area Macy’s vacated in January.

The shelter would occupy the space for two years while its current facility at 930 N.
Henry St. goes through a major renovation.

Former Alexandria Mayor Kerry Donley, who is vice chairman of the Carpenter’s Shelter board, has been leading the lease talks.

Donley said he originally approached the Texas-based company about the possibility when it first took control of the site earlier this year.

“We’ve been talking to them for a number of months and it seems like our two year window for using it as a temporary shelter aligns well with their planning to redevelop the site,” Donley said. “It seems like it will be a win-win for both organizations.”

Shannon Steene, executive director for Carpenter’s Shelter, said the possibility of finding a temporary home is a testament to how supportive the community has been toward the nonprofit.

“We’re grateful that the Howard Hughes Corporation is entertaining the possibility,” he said. “It’s one more example of the community’s support for the mission of The Carpenter’s Shelter.”

Before beginning talks with Howard Hughes Corporation, Carpenter’s Shelter had spent two years searching for a temporary space without much luck. The shelter ran into a number of constraints in its search.

“We have evaluated a number of sites and had some discussions with folks, but it was pretty apparent that number one, any place we looked at would carry a big price tag in terms of improvements we would need to make and, quite frankly, a number of places weren’t interested in leasing to us,” Donley said.

Donley said Landmark Mall “fit the bill” across the board, partly due to its proximity to public transportation.

Once the lease is signed, Carpenter’s Shelter could use 15,000 square feet of the former Macy’s – about a quarter of the store’s overall footprint.

The shelter could adapt the space to its uses relatively quickly, Donley said. Temporary walls, showers and laundry facilities, among other things, would need to be installed. The intent is for the shelter to make its move to the provisional facility by the first quarter of 2018, Donley said.

Donley, who has served on the board of the shelter for eight years, said the possibility of occupying part of Landmark is an ideal solution to get Carpenter’s Shelter and its residents through the transition period.

“What I think is exciting about it is we are going to be redeveloping our site, which will have 97 affordable units … [in] the new shelter. It’s an innovative approach for two community nonprofits, Carpenter’s Shelter and [Alexandria Housing Development
Corporation], to come together to utilize their resources to build 97 affordable units that will benefit the affordable housing shortage in the city,” Donley said.

The new Carpenter’s Shelter will be seven stories, with the shelter on the first floor and 97 units of affordable housing throughout, which will be made available to households with incomes between 40 and 60 percent of the area’s median income.
In addition, 10 of the units will be reserved for formerly homeless individuals who continue to receive services from the shelter. A parking garage will be located underneath the building.

The hope is that Carpenter’s Shelter will be able to move into the renovated building by early 2020. Howard Hughes Corporation, meanwhile, plans to begin demolition on Landmark the same year.

Councilor John Chapman, who has strongly advocated for affordable housing during his time on council, said the temporary move would be a good use of Landmark at a time when the redevelopment schedule is still in flux.

“With the developers not moving as fast as many folks in the community would like, it opens up the opportunity for Carpenter’s Shelter to make use of the space,” Chapman said. “It’s a great use for them and the timing worked out perfectly.”

Much of the uncertainty surrounding Howard Hughes Corporation’s redevelopment plan comes down to whether the Sears store at Landmark remains open. Without acquiring the Landmark Sears, the company would be relegated to redeveloping two-thirds of the mall instead of making the entire property mixed-use, with open-air retail and entertainment, as well as residential components.

Redeveloping the whole property would be preferential, Chapman said, especially for a community that’s been “waiting for decades” for some movement on Landmark’s revitalization.

Although Howard Hughes Corporation didn’t respond to requests for comment, Steene and Donley expect Carpenter’s Shelter to sign the lease with the company in a matter of weeks.

Steene is excited to make the deal official, because the sooner Carpenter’s Shelter makes its temporary move, the sooner work can begin on its permanent home.

“It definitely has upsides for both entities. Howard Hughes is able to provide some functional use for the space while they’re doing their planning and Carpenter’s certainly needs a place to be while we’re redeveloping,” Steene said. “The fact that those two timelines are coming together and are simpatico is a good thing.”