When my daughter, Josey, came home from college last Saturday for fall break, we decided to use some of the apples I had bought at the Old Town Farmers’ Market that morning to bake something.

We considered making a plain old apple pie, but decided to forego the crust carbs.
Sometimes I just cook them down into a homemade applesauce, which is a great accompaniment to meat, but since Josey is vegetarian, that was a non-starter.
We wanted to make something healthy, and ultimately settled on granola. Then we started looking for recipes and tinkering.

We found a recipe for cinnamon apple pie granola on a vegan recipe website, but improvised a bit based on ingredients we had on hand, plus personal preferences.

What we wound up making combines apples and apple pie spices cinnamon, ginger and nutmeg, with natural (no sugar added) peanut butter that Josey loves and pecans for me, plus oats. Sweetness came from maple syrup, honey and molasses.

Whether you pick your own apples at a nearby orchard or scout out the seconds bin at a farmers’ market like I do, this is a fun time of the year for cooking with apples.

You don’t even need to wait for fall break – any day with about an hour to spare is enough time to make delicious granola. 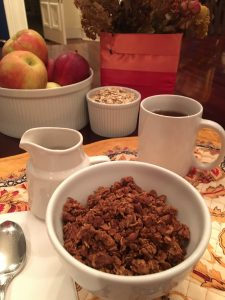 1. Preheat oven to 325 degrees and line a baking pan with parchment paper.
2. Peel and chop apples and set aside. In a large bowl, combine oats, pecans, cinnamon, salt, nutmeg and ginger and stir until combined, making sure the spices coat the oats.
Add the chopped apples and stir until they are also coated with spices.
3. In a separate smaller bowl, combine honey, syrup, molasses, peanut butter, canola oil and vanilla and stir until well blended. Pour this mixture over the dry ingredients and stir until the oats and apples are coated and wet, stirring up from the bottom of the bowl as necessary.
4. Spoon this mixture out onto the parchment paper and smooth out. Bake for 15 minutes on the center rack.
Remove and stir up, turning the granola over to ensure even cooking, then put back in the oven for another 12 minutes.
Check and stir again at that point and cook for up to another five minutes, but watch closely so the granola doesn’t burn.
5. Let granola cool 10 minutes before eating, and make
sure it’s completely cooled before storing in a ziplock bag or
other airtight container.