Union Street Public House at 121 S. Union St. is opening 1986 – The Whiskey Bar in its recently renovated back bar area. The new concept will focus on handcrafted cocktails, with a heavy emphasis on whiskey- and bourbon-based selections.

A news release said 1986 will have more than 100 whiskey selections, as well as aged spirits like rum and tequila. Signature cocktails will include The Irish Brigade, consisting of vanilla Jameson with cold brewed chamomile tea and luxardo; the Border War, a tequila, rye, sweet vermouth and ancho reyes creation; Boulevardier, a bourbon, sweet vermouth and Campari cocktail and the Old Cuban, made of Bacardi 8, mint, bitters, cava, lime and simple syrup.

The bar will accommodate up to 36 people and will be open four nights a week, Wednesday through Saturday, beginning at 5 p.m. 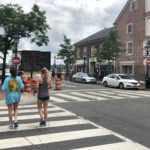 Cody Mello-Klein - May 28, 2020
By Cody Mello-Klein | [email protected] After a two-week delay, Northern Virginia will be allowed to join the rest of the state in entering the first...