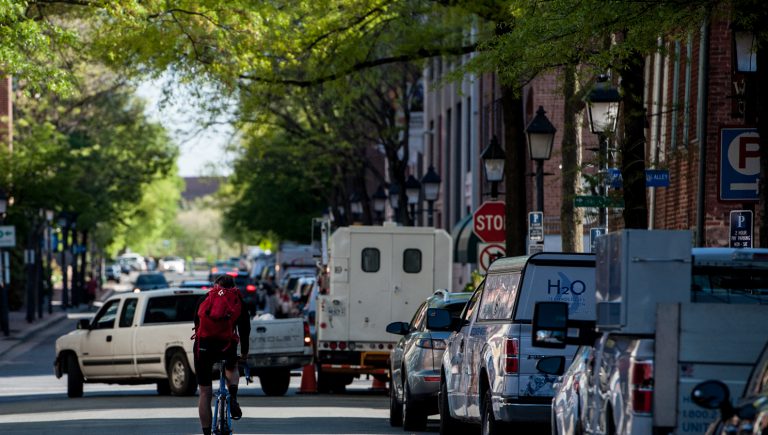 Before the group can present its recommendations to city council next month, it needed to meet with the public to explain data it has been collecting. The session with the public was held as scheduled, despite the fact that the final parking study report has not yet been made public.

The meeting Wednesday evening included several stations with posters, flyers and powerpoint presentations about parking in the city. It was set up so that residents, business owners and other community members could peruse and discuss the data one-on-one with task force members.

The task force’s general conclusion, which has formed the basis of the group’s discussions at its monthly meetings, is that there is too much parking available in the city of Alexandria.

“Any time people hear that we’re changing parking, the kneejerk reaction is ‘That’s a terrible idea,’” said Katye North, a parking planner in the Department of Transportation & Environmental Services who is spearheading the project.

In the face of opposition, the task force is relying on the support of data North said is available online, even though the study itself has not yet been made public.

According to North, data was collected last spring at 60 different locations around the city. Surveyors noted how many spaces were being used in parking lots during peak times, such as weekend nights for restaurants or during the workday for office buildings.

According to the standards for the study, if a parking lot was less than 85 percent full, it is being underutilized. By those standards, a six-car parking lot with five spaces taken would be at 83 percent capacity and therefore underutilized. Yon Lambert, director of T&ES, said all but one of the parking locations were “under-parked.”

North said data was collected once at most of the 60 sites and occasionally twice at sites that needed double-checking. At 22 sites, there was a more in-depth study in which the task force sent a consultant to ask customers whether they had driven or used a different mode of transportation.

Sandra Levy, owner of a small business in Old Town, noted that one of the studies presented at the open house said 52 percent of a restaurant’s customers did not drive.

“They have no way of finding out how many people did not come because they couldn’t drive,” Levy said. “This is the problem – people don’t come.”

Levy said she has heard countless complaints about parking from her customers at Alexandria Myotherapy.

The task force’s main goals at the open house were to update the public on the task force’s potential recommendations and to inform them about parking standards in general.

Several posters at the event said people often choose to park on the street in front of a business instead of utilizing parking the business provides elsewhere, like the garage around the corner. While it may appear to residents and shoppers that there is never enough street parking, several of the city’s garages are being underutilized, according to the task force’s conclusions from the study.

“I mean, think about the last time you went to park,” Lambert said. “Where are you looking first? On the street, right in front of your business. You’re not programmed necessarily to find a garage. And that’s something that we’re working to change.”

If change is in the works, it hasn’t reached the City of Alexandria’s website yet. A page on the government’s website titled “Where to Park in Old Town Alexandria” elaborates upon the metered and free street parking around Old Town. It does not mention garages.

“What we don’t want is for people who are coming to these businesses to come over and park in the residential blocks and take up the spaces that the residents actually need,” Lambert said. “If you’re gonna park for a longer period of time, more than an hour, we want you to park in a garage.”

Lambert said 10 percent of the City of Alexandria is made up of parking lots and garages.

“What we’re saying is, maybe we don’t have to build that much parking in the area,” Lambert said.

“We need all the parking we have,” Ray said. “All my girlfriends, anyone who owns a business in Old Town, are saying, ‘What are they thinking?’”

The Parking Standards Task Force will hold its next meeting at the Charles Houston Recreation Center on Nov. 13 at 4 p.m. More information from the task force is available at www.alexandriava.gov/tes/info/ default.aspx?id=76333.