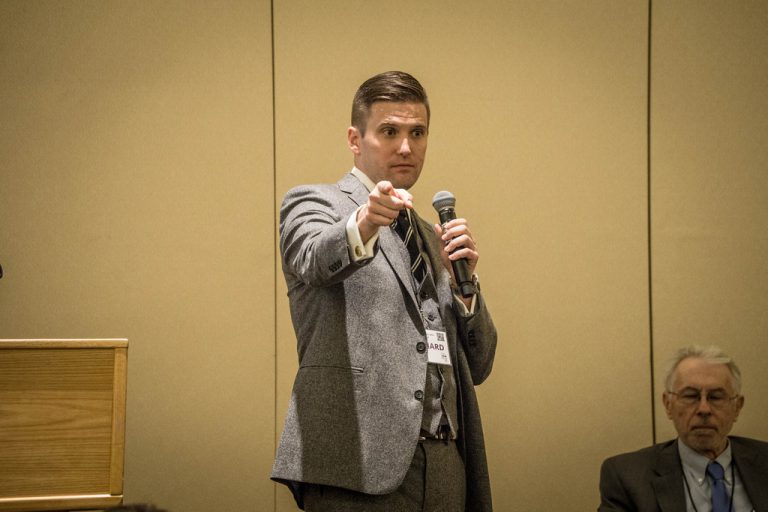 If you haven’t heard by now, we live and work near Richard Spencer and his National Policy Institute, an organization that has been around a while, but only recently moved to Alexandria. He espouses white supremacy and ethnic cleansing.

His group is supposedly a think tank and puts out papers like the “The State of White America” released in 2007. In the report it says that Brown vs. the Board of Education, the Civil Rights Act and busing were some of the worst decisions ever.

Their offices are on the second and third floor of 1001 Cameron St. above Bluprint Chocolatiers, which has no association with Richard Spencer, and whose business has been disrupted by this new neighbor. Please support them. The landlord of the property also did not know any background on Richard Spencer when they leased the space to them.

Spencer’s followers told me personally that they were in Charlottesville carrying torches, and that the victim of violence, Heather Heyer, died of a heart attack, not as a result of a car ramming into her, which is a total fabrication.

You cannot claim to be something else and march with Nazi and Confederate flags reminiscent of Nazi Rallies: “It perfectly suited Nazi propagandists, who used torchlit parades and rallies to attract Germans, especially youth, to the Nazi movement” according to the United States Holocaust Museum.

They were also used for intimidation by the Klu Klux Klan.

“Torches became a consistently described part of the Klan’s early parades and use of visual intimidation. They would continue to be a terrifying feature of the organization when it reemerged in the early 20th century,” according to Forbes magazine.

I cannot tell you how strongly I disagree with this group’s purpose and goals. On one hand they seek attention, and so ignoring them can be one strategy, but that also implies that it is OK to stay ignorant of their purpose and their presence. I am not at the vanguard of efforts to expose these misguided young men, but after having two personal encounters with members of the organization, including Spencer himself, I am determined to act.

In “Homage to Catalonia,” George Orwell said he had to go to Spain because “Nothing’s going to change unless we do something to change it.” Spencer never goes anywhere without bodyguards, and when he approaches a protest, his followers surround him. The purpose is to intimidate people. They remind me of playground bullies I encountered when I was young. Their only strength is in numbers. If they want to attempt to intimidate me or anyone else they have approached the wrong neighbor.

I am not intimidated and I now plan to disrupt them at every opportunity.

When they told me that they planned to be here for a long time and recruit more people like them that only fuels my determination to act untill they are gone and discredited.
Let’s show them they picked the wrong town, the wrong state and the wrong country to espouse their ideology.