The T.C. Williams varsity girls’ basketball team has charged into the new season hungry for victory after a 2016-17 season that was full of promise, but came up one game short of reaching the state championship tournament. In the team’s final game last year, the Lady Titans lost 50-44 to Oakton.

While most people would be happy with the Lady Titans’ 25-2 record last year, the team and Head Coach Nakesha Walton were left wondering about what might have been. Walton said the team has been using last year’s disappointing conclusion as motivation for the 2017-2018 season. 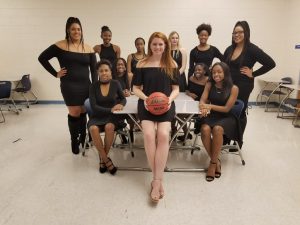 Walton said the team this year was focused on staying “disciplined, humble and hungry.” So far, the approach has led to five wins since their opener on Dec. 1.

“Every game for us, we have to bring our top notch, our A game,” Walton said, “because we have a big boulder on our back where everybody’s trying to see if we come up short or see if they can beat us.”

The team this year is composed of four seniors, three juniors, three sophomores and one freshman. Of the 11 players, five are returning from last year’s team. Walton said the veteran varsity players have been acting as role models for the new players and helping to integrate them into the team.

“Our newcomers have fit right in,” Walton said. “They all play quality minutes. It’s never a drop with the rotation, so I’m pretty ecstatic about our sophomores and even our freshman stepping up into the role of being a varsity high school basketball player.” 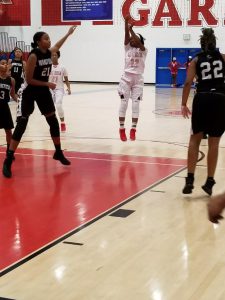 Not only does the team have a positive dynamic on the court, they spend time together outside of practice as well, bonding and supporting each other academically.

Junior Trinity Palacio said Walton organized study halls for the team to help them incorporate schoolwork in their basketball-heavy schedules. She said her teammates were like family, whether going out to eat after a win or getting competitive over a game of bowling.

Palacio has been a point guard for T.C. varsity basketball since she was a freshman. She said Walton was responsible for her improvement as a player.

“When I first came here my freshman year, [Walton] really helped me, freshman year to junior year, just become a better player and mature,” she said. “She’ll make you into a great player.”

Walton has been coaching basketball at T.C. Williams since 2004. She said the team looks at her as a tough coach because she doesn’t let them take success for granted.

“I don’t let them slack on anything,” Walton said. “Even though we may come off on … a five-game winning streak, I’ll come back like we’re coming off a fivegame losing streak, just to kind of stay on ‘em and aim for perfection.”

Palacio said the team this year could improve by preparing for close games and working on free throws. She also said the team has a strong defense, but that it sometimes gets them into foul trouble. 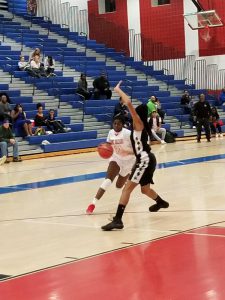 “We’re a good defensive team, and I think since we’re so aggressive … the refs call it how they want to,” Palacio said. “We foul a lot.”

“We’ve been fouling incredibly too much,” Junior Sasha Bates concurred. “It’s getting bad this year.”

Bates, a three-year varsity shooting guard, said the fouls were a minor obstacle the team would get past.

“Our strength is that everybody fills their role as a team and nobody can stop us,” she said. “If we just calm down and be ourselves, we’ll be very true to our team and be amazing.”