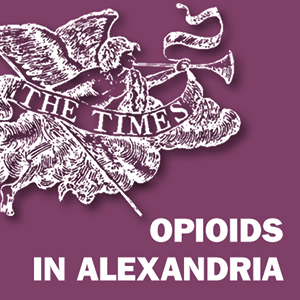 Lieutenant Michael Kochis, commander of the Alexandria Police Department’s vice and narcotics section, said the feeling of addiction withdrawal from opioids has been described to him as akin to a person’s skin being ripped off of his or her body.

The grueling mental and physical dependency leaves users in constant fear of the vicious withdrawal they know will occur if they stop using. As they depend more and more on the drug, its danger increases. All it takes is injecting too large a dose to chase a high, or purchasing a street drug that has been laced with something unexpected, for someone to overdose and die.

Read Part 4: The opioid crisis through an EMT’s lens

In this fifth article in the Times’ series on Opioids in Alexandria, we examine the killers themselves in the nationwide opioid epidemic: the drugs.

Common opioids include heroin, oxycodone, Vicodin, fentanyl, codeine, morphine and several others. The drugs turning up most often in cases around Alexandria involve heroin or a hybrid of heroin and fentanyl, according to Kochis.

Heroin-fentanyl mixtures are popular for their price and potency. Not only is fentanyl much cheaper for dealers to obtain at $1,200 per kilo versus up to $82,000 per kilo for heroin, it’s also extremely powerful, Kochis said. The National Institute on Drug Abuse describes fentanyl as a synthetic opioid similar to morphine, but 50 to 100 times more potent.

“You mix up a little bit of heroin with mostly fentanyl, you have some good stuff,” Kochis said. “It’s what people look for even knowing the risks, because it’s such a significant high.”

The potency, however, is what often leads to overdose and death.

“Some opioids are more potent than others, so a small amount of one can be much stronger than the same amount of another, and that’s where the fentanyl analogs have caused so many overdose deaths,” said Dr. Hughes Melton, M.D., chief deputy commissioner of the Virginia Department of Health.

Somebody who is used to taking a gram of heroin may take the same amount of a heroin-fentanyl mixture without realizing it will be 50 to 100 times stronger, Melton said. It is often in these situations that overdoses and deaths occur, because the concentration of opioid activity in the bloodstream is so high it stops respiration.

Another frequent cause of overdoses is when users combine drugs of different classes and forms.

“People do not usually die from just one drug,” Melton said. “It’s just another layer, another level of bad and dangerous, when drugs of different mechanisms of action are combined.”

Melton said drugs of different classes that are frequently paired with opioids include alcohol, benzodiazepines such as Xanax, and other seemingly harmless sedatives such as Benadryl. When these drugs are combined, the effect isn’t additive — it’s exponential.

“If you take some opiates, and you get sort of a buzz, then you just take a little bit of benzodiazepine, you don’t just get a little more buzz, you get dead,” Melton said. “Combining drugs, because of the way they work in your body and in your brain, they don’t have an incremental effect when you add one to the other, they have an exponential effect … that’s usually how people die.”

With such dangerous drugs being developed and sold on the black market, the Alexandria Police Department has taken precautions in its training and fieldwork.

“As a rule, our patrol officers are not what we call ‘field testing’ suspected heroin,” Kochis said. “So what that means is, say an officer stops someone or finds a powder they believe is heroin, we don’t test it there.”

The substance is sent to a lab to be tested in a controlled environment, but the officer can still arrest and charge the suspect based on the totality of circumstances, Kochis said.

In addition, Kochis said officers in the narcotics unit are educated about heroin, fentanyl and other opioids that are circulating in the market of illicit drugs.

One drug that has cropped up in recent years is carfentanil, a synthetic opioid used to tranquilize large mammals. The U.S. Drug Enforcement Administration issued a warning to the public and law enforcement about carfentanil in September 2016 that states the drug is a fentanyl analog 10,000 times more potent than morphine and 100 times more potent than fentanyl itself.

Kochis said Alexandria has not yet had any cases of carfentanil, but Fairfax and Prince William counties have. Carfentanil is especially dangerous for law enforcement because it comes in several forms, including powder and spray, and it can be accidentally inhaled or absorbed through the skin. Since undercover officers cannot wear personal protective equipment when purchasing a dangerous drug, Kochis said there is always a team nearby with an antidote called naloxone as a precaution.

When people overdose, naloxone is the only substance known to reverse the opioids’ effects, according to Melton. Formulations of naloxone include Narcan and Enzio. Naloxone, however, is only an immediate solution to an overdose and does not cure withdrawal symptoms or the underlying problem of addiction.

While different opioids have varying effects, the principal reason they are legally prescribed is pain management. According to the NIDA, the drugs interact with opioid receptors on nerve cells in the spinal cord and brain to reduce the intensity of pain signal perception. They are generally safe when prescribed by a doctor and taken for a short period of time, according to NIDA.

Since the opioids produce a sense of euphoria in addition to eliminating pain, however, they are often misused. A December 2016 article by Science Line states that physical dependency may take a while, but psychological addiction can take place in fewer than three days.

Melton said the addictiveness of opioids depended on the type and form of the drug.

“What makes one opioid more addictive than another is how quickly it gets into your bloodstream and the level of the drug peaks,” Melton said.

Drugs taken orally, snorted nasally or injected in liquid form all have different impacts. For example, an opioid taken orally will take longer to get into someone’s system and have a more gradual peak than one that is crushed and snorted, according to Melton.

He also said opioids that are prescribed are often given in oral form, whereas illicit street drugs usually turn up in other, more addictive forms.

In addition to the mental side of addiction, heavy opioid users also experience an intense physical dependency.

“It’s been described to me as your skin being ripped off of your body. You don’t sleep for days. It’s a very physical addiction. They just can’t stop,” Kochis said. “They wake up, and they’re sick, very sick … From what I see, they have almost a fear of not getting that high or that fix, because of the detox from opioids, heroin or fentanyl, it’s violent.”

Melton said education is important for preventing addiction and that prescribers need to warn patients exactly what opioids will do to their bodies. Common opioid side effects include drowsiness, mental confusion, nausea, constipation and respiratory depression, according to NIDA.

“Historically, prescribers did not do a very good job of explaining the risks and how is it that an opioid works, other than just, ‘It’ll help with your pain,’” Melton said. “Well sure, but it’s gonna do all these other things too that potentially you need to watch out for, like cause constipation, make you sleepy, dangerous driving … It can make you fall, it can cause you to stop breathing, all of that needs to be explained to individuals.”

In addition to educating patients on side effects and risks of addiction, Melton said everyone should be aware of the long-term effects of opioid addiction. In addition to overdose and death being the most lethal consequences, some common withdrawal symptoms include restlessness, drowsiness, muscle and bone pain, insomnia, diarrhea, vomiting, cold flashes and involuntary leg movement, according to NIDA.

“The more a person understands what the drug does to them,” he said, “the less dangerous it is.”

According to the National Institute on Drug Abuse, heroin is an opioid drug made from morphine, a natural substance that comes from the seedpod of various opium poppy plants. Its chemical name is diacetylmorphine, with the molecular formula, C21H- 23NO5, according to the U.S. National Library of Medicine.

Although morphine has a much longer history, heroin has been around under its current name since the late 1800s. Heroin typically comes in a white or brown powder or a black sticky substance called “black tar heroin.” It can be injected, smoked or snorted. It is classified as a Schedule I substance under the Controlled Substances Act of 1970, meaning there is no current accepted medical use for it in the United States.

Fentanyl is a powerful synthetic opioid analgesic (pain reliever) similar to morphine, but 50 to 100 times stronger, according to NIDA. Its molecular formula is C22H28N2O, according to the NLM. Fentanyl is a Schedule II narcotic under the Controlled Substances Act and is approved by the FDA for use as an analgesic and anesthetic.

According to the DEA, fentanyl was first developed in 1959. There was a spike of fentanyl overdoses from 2005 to 2007 and another surge has been seen in recent years. The fentanyl and fentanyl analogs associated with recent overdoses are produced in clandestine labs, according to NIDA. Fentanyl comes in numerous forms and is often mixed with other drugs.

Due to the recent spike in illicit fentanyl use, there is a bipartisan bill in congress called the INTERDICT Act, which aims to halt the flow of illegal fentanyl from Mexico, China and other nations into the United States.

Read Part 6: Justice in the midst of crisis