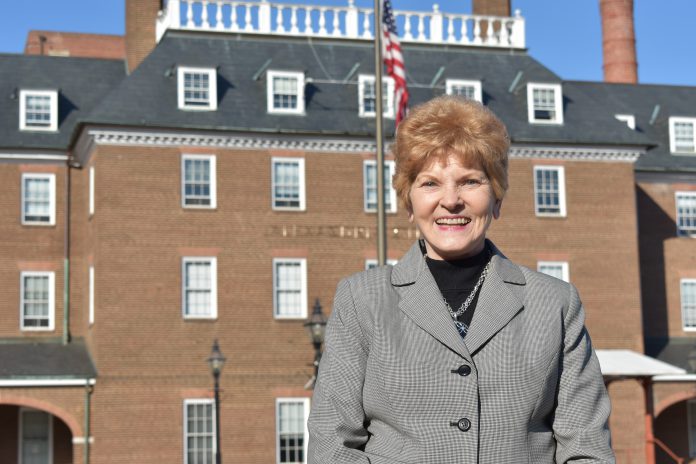 When Del Pepper discusses her thoughts on the issues facing Alexandria, her excitement suggests this is her first run for city council, not her 12th. Pepper, first elected to council in 1985, announced last month that she would seek yet another term in 2018.

“Why do I want to come back?” Pepper reflected. “Because I want to make a difference, and I really think that I do. … I have something to offer, and I really, I’m excited about the city. You can hear it in my voice.”

Pepper said her ongoing service to council was motivated by passion for the city and the issues it faces. She said she was especially invested in seeing the redevelopment of Landmark Mall and the construction of the Potomac Yard metro station to completion.

Former Mayor Bill Euille said the reason for Pepper’s longevity is her charm, dedication, commitment, passion and seriousness for getting the job done.

“She has made being a member of council more than just a part-time job,” Euille said. “[It’s] her life’s passion. I mean, she loves it, she enjoys it, she doesn’t have to do it, but being part of community service, this is something that always has inspired her.”

Looking back on her 33 years on council, Pepper said her greatest achievements include instigating the EcoCity Initiative, spearheading the closing of the GenOn power plant and establishing an IT Commission to keep up with technological advances ahead of other jurisdictions in the region.

Pepper said she sparked the conversation about making Alexandria more eco-friendly after attending a national conference. The Eco-City Charter was adopted in 2008 as a holistic, strategic effort to achieve sustainability, according to the city website.

Pepper also co-chaired the committee that monitored the closure of the GenOn power plant in North Old Town in 2012.

“She was a very out-front leader and first advocate in working with the community, addressing the issues [and] pushing the GenOn facility for its closure and demise,” Euille said.

Looking to Alexandria’s future, Pepper said one of the main things she’d like to see completed during her time on council is the redevelopment of Landmark Mall, which has been closing bit by bit for years. Only the Sears store remains open.

“For years, I have been this cheerleader for not only the West End but for Landmark Mall, and every time we think we’re moving ahead, then we can’t.” Pepper said. “I believe that once it gets going, things up and down Van Dorn will get going.”

Pepper said in the past few weeks Howard Hughes Corporation has taken a major step and closed negotiations with other stakeholders so that it has almost complete control of the site. Because of the agreement, Pepper said serious planning to realize the blueprints for the commercial and residential site would begin this spring.

“That is a real step forward right there,” Pepper said. “That makes it so much easier, when you’re planning with one entity. [Howard Hughes Corporation] have pretty much the whole say now, and we’re very pleased with that. That makes me feel that all this hope that has been raised may come to something.”

“I think that Del has always had a good sense of what our true local priorities are. When you boil it down, the local government is primarily responsible for public education and public safety, and I think that’s where Del has spent a lot of her time,” he said.

Pepper said she is passionate about meeting the infrastructure and capacity needs of Alexandria’s public schools and will continue fighting to allocate budget money for those causes.

“The fact that we are having this expanding population is, I think, wonderful actually,” Pepper said. “We just have to find a way to accommodate it. If that means building more schools, we gotta do that. We need to be looking for sites right now … because it takes forever to find a site.”

In addition to the environment, the West End and schools, Pepper has done substantial work for the city’s aging population.

Mary Lee Anderson, the executive director of Senior Services of Alexandria, worked with Pepper when she was on the SSA board and through the Commission on Aging.

“On the Commission on Aging, Del has been a fabulous sounding board on priorities for the commission, where we should be focusing our efforts and advocating for seniors and the most effective way and realistic way to advocate for seniors in the city,” Anderson said.

Anderson said a few years ago, Pepper fought to protect the property tax relief program for seniors, who often live on a fixed income and struggle to age in place.

“Del [was] a great advocate for the property tax relief for seniors, when that was put on the chopping block a few years ago by the previous city manager,” Anderson said. “She really steps up when you need her to and advocates for the city doing what’s right for some of our older, most vulnerable residents.”

At 33 years, Pepper has been serving on council longer than any of the other incumbents. Euille said the institutional knowledge she’s acquired throughout her service is a benefit to all of council, especially new members.

New members will fill at least two of the seats in the newest council, as Councilor Tim Lovain is not seeking reelection and Vice Mayor Justin Wilson is giving up his seat to run for mayor.

“She’s always able to recall things that we’ve done in the past and how they were handled, particularly if they were issues or initiatives that are very challenging,” Euille said. “[She’s] offering ideas and solutions and input in making the process whole and complete.”

“I’m excited about some of the things that we are doing, because I know that they are going to make this a better city,” Pepper said. “Some of these things – Potomac Yard, Landmark Mall, the work that we do for affordable housing, … what we do with the schools – I want to be sure that there’s my voice there making sure that these good things happen.”