The city’s report on 2018 real property assessments demonstrated that the gap between the residential and commercial tax base continues to widen.

In the 2018 report, residential property tax assessments were up 3.4 percent from last year, an increase of about $751 million, while commercial assessments rose .93 percent, about $225 million. 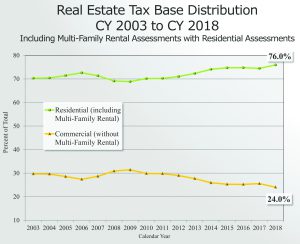 From 2017 to 2018, non-residential, commercial properties in Alexandria fell in value by 3.74 percent, just over $372 million. In the same time period, residential property assessments — including commercial rental assets like apartments — rose by 4.42 percent, a dollar year over year increase of $1,283,282,887.

The increase in property assessments was almost three to one due to appreciation of assets rather than new growth.

The city’s residential tax base, including multi-family rental properties, now provides 76 percent of Alexandria’s tax base, as compared to just 24 percent for commercial property without multifamily rental. 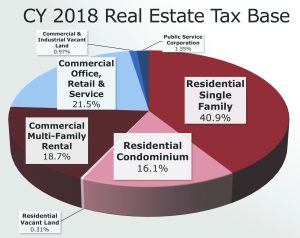 Council voted unanimously to pass the assessments. People can request a review of assessments on their property until March 15 and can file an appeal with the Board of Equalization until June 1. For questions, call 703-746-4646.

Council voted unanimously to pursue a partnership agreement and approve a loan that would allow the Freedom House museum at 1315 Duke St. to remain publicly accessible.

The Freedom House is a National Historic Landmark located in the basement of one of the most infamous slave trading sites in the world. Northern Virginia Urban League is a nonprofit that has been operating the museum along with a series of youth service programs throughout the city.

City Manager Mark Jinks said the organization has reached a point where it is not feasible to support both of its missions.

The organization’s struggles initiated conversations with the city about partnership opportunities. The presentation put before council

Tuesday evening outlined a nine-month agreement and loan of $63,000 that would allow the museum to remain publicly accessible.

All of council agreed that the history of Freedom House was significant and that they should fight to keep it open to the public. Mayor Allison Silberberg said that she had met with representatives of the Urban League and that a solution would have been put forward sooner if not for bad weather that caused a meeting in January to be cancelled.

Vice Mayor Justin Wilson and Councilor Paul Smedberg both expressed support for the partnership, but concern for the challenges it might bring.

“We’re, at least partially for now, becoming a partner in a property at a time where we struggle to deal with the properties we have today,” Wilson said. “I think that is something we all need to acknowledge and understand it

figures into our broader conversation around capital investment, infrastructure investment for years to come.”

Councilor John Chapman said it would be important to talk to other nonprofits and support groups about partnerships to help sustain the museum.

Councilor Willie Bailey spoke passionately about the project, saying he was upset he had received emails encouraging council not to approve the loan.

“It really disappoints me that there are people who live in the City of Alexandria who sent emails out that said we should not support this,” he said. “I find it difficult to sit up here and have this conversation as a black man here on this dais.”

Bailey compared loaning $63,000 to Freedom House to the efforts council made to preserve the Murray-Dick-Fawcett House at 517 Prince St.

“We went above and beyond that grant for the Murray-Dick-Fawcett House at 517. I think at one point, the conversation was even about us purchasing that home,” Bailey said. “A million black folks came through that house on Duke Street. … We need to do everything we can.”

“I mean I’ve heard [people talk about] the historic fabric of the city. I’m thinking a lot of these slaves probably built half the homes, a lot of the property here in Old Town. We owe them to keep telling that story for years to come,” he said.

Council voted unanimously to approve the loan and partnership agreement.

Another topic discussed was the renewal of a lease for the Alexandria Boxing Club at Charles Houston Recreation Center. The renewal was requested by the leaser of the property, Fight for Children, a D.C. nonprofit that partners with the club.

Council voted unanimously for staff’s recommendation to look into the lease agreement report and docket it for public hearing.

An issue brought up by Chapman and the boxing club’s team manager, Dara Shen, was the inclusion in the updated agreement of a fee for visiting sparing partners.

Chapman expressed concern about the negative impact this nonresident fee could have on current members of the club, since it might prevent them from practicing with their usual partners in the region.

“I’m worried about the loss in opportunity for our participants to actually get that quality interaction,” Chapman said.

Shen said a visitors’ fee was unheard of in boxing clubs in the region.

“While a $10 fee for a nonresident seems nominal – and I don’t know how much revenue the city would receive from that – it is a considerable obstacle for a lot of the people who participate with us,” Shen said.

“I’d hope that the city council can take into consideration the work that we do for the community,” she said, “and grant us maybe an exception or maybe look into not needing to charge visiting sparing for fees.”

Chapman suggested that before the public hearing, council weigh whether the revenue generated by the visitors’ fees was worth the loss of opportunity for Alexandria’s boxers, because certain partners might not want to pay the fee.

Silberberg agreed that staff could go over alternative options to avoid the visitors’ fee before the lease comes before council again at public hearing.