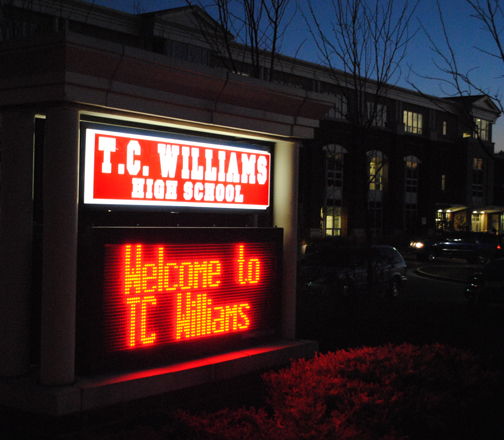 Last week’s Alexandria Times contained a front page story about a courageous black woman named Blois Hundley, who in 1958 was fired from her job as a cook at Lyles-Crouch Elementary School by then city schools superintendent T.C. Williams (“A school cook’s forgotten civil rights stand”).

The “sin” committed by this mother of eight: She joined a civil rights lawsuit petitioning for school integration.

We ran an accompanying editorial (“Should Alexandria’s high school bear the name T.C. Williams?”) advocating for the removal of the name “T.C. Williams” from Alexandria’s only public high school. To us, it seems wrong to continue honoring Thomas Chambliss Williams, an ardent segregationist, by having his name adorn a building that has a 78 percent minority student body.

We want to make it very clear, however, that this call to change the school’s name is in no way a reflection on current or former students or faculty at T.C. Williams High School. Nor was the story a criticism of the learning that takes place within those school walls every day during each school year.

There are three main facets to consider when pondering removal of a controversial name: the circumstances surrounding selection of the name, the impact its removal would have on those who came before and how those in the future would be affected.

We draw a distinction between a city honoring their fallen dead in the years after a war, as Alexandrians did when the Appomattox statue at the corner of Prince and Washington streets was erected in 1889, and segregationists defiantly putting the names of Confederates on streets during the civil rights era. The name T.C. Williams was chosen in the mid-1960s, when integration was still being resisted in localities as disparate as Boston and the Deep South.

The intent at the time was almost certainly to simply honor a longtime former superintendent. The decision was apparently not controversial. But times do change, and reevaluation is healthy, particularly when a school name is involved.

Those who would be most negatively affected by changing the name T.C. Williams are the thousands of graduates from the school since its 1965 opening, along with those who have taught and worked there. It’s difficult to fathom that your alma mater might go by a different name than it did when you attended. Graduating from the school “formerly known as T.C. Williams” is not quite the same as having the name still there. It’s unsettling.

But if the name were to be eventually removed from the building, it would be for the students of the present and future. Future generations would be able to say they graduated from “Alexandria High School” or whatever name might be chosen, rather than from a school named for a man who so embraced segregation that he summarily fired a poor black woman who dared to want to integrate schools.

The ideal time to remove the name T.C. Williams would have been 2007, when the beautiful new high school building opened.

While that opportunity was missed, it’s not too late to change the school’s name.

Yes, the transition would come with bumps, but sometimes it’s essential to look forward rather than back.