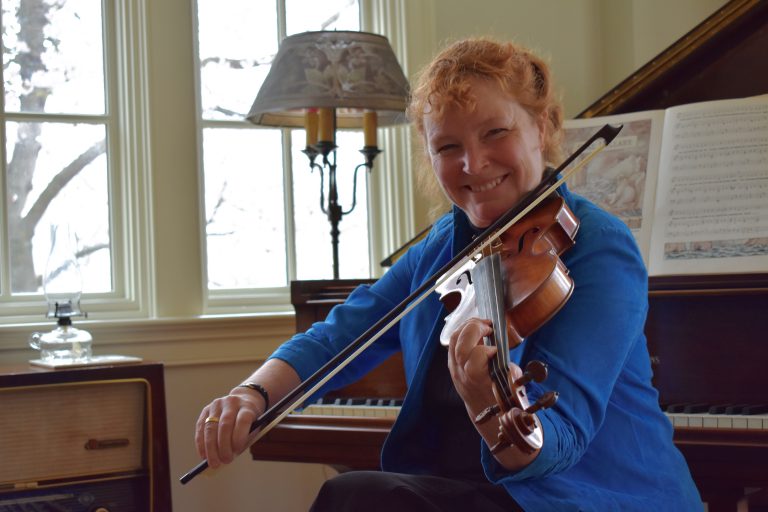 Alexandria’s own Grammy-nominated fiddler has spent a lifetime bringing the traditional music of her Scottish roots from pubs and firesides to the world’s most renowned stages.

Over the course of her career, Bonnie Rideout has won several national and international fiddling competitions and recorded more than 15 albums. From the Kennedy Center to the mountains of Honduras, Rideout’s Celtic tunes have traversed the globe.

Now retired from 31 years of touring, Rideout spends her time pursuing other projects and musical passions.

Growing up, Rideout lived on an island off thecoast of Maine and on a farm in Michigan.

“As I was growing up, there was no TV. It was very rural,” Rideout said, “so music was our entertainment. We’d sit around and play.”

Born into a completely Scottish family, Rideout said everyone in her family was musical. Her mother, a pianist, first tried to teach Rideout to play piano.

“I remember she gave me like two lessons on the piano, and I guess it was because I just wanted to do it myself, but my mom said, ‘You’re impossible to teach, you’ll never play music, forget it’ and so she just ignored me,” Rideout said.

Rideout first set her sights on a fiddle while snooping around her house in search of Christmas presents. Buried deep in a box under a pile of sheets in her mother’s closet, Rideout stumbled upon an old violin.

“I just fell in love with it, just even holding it,” Rideout said, “but then I couldn’t admit that I was snooping around her closet so I had to like wait and sort of then accidentally-on-purpose make some excuse and go in there like, ‘What’s this, Mom?’”

Rideout learned it was her mother’s childhood violin and adopted it as her own. She taught herself how to play by ear and learned traditional Scottish fiddle music through the oral tradition. At 8 years old, she began violin lessons in Michigan.

While a violin and a fiddle are technically the same instrument, it is the style of music that distinguishes the two. Rideout said as she was growing up, she considered the Scottish music she played with her family her private music and the classical pieces she studied in lessons her public music.

“A violin’s just a fiddle that went to college,” Rideout joked.

While studying classical music and art at the University of Michigan, Rideout spent her summers pursuing her personal music and touring with fiddle groups in Scotland. It was through one of the tours that she landed her first recording contract at age 23.

While she transitioned through a number of day jobs through the years, eventually, her music career was enough to support her on its own.

Since signing with that first record label, Rideout has composed and released more than 15 solo albums, in addition to establishing her own record label, Tulloch Music, Ltd. She said over the 31 years she toured, there was a surge in popularity in Celtic music that bolstered her success.

“There was like this Celtic wave. Everybody started listening to Celtic music for a while,” Rideout said. “The timing was surprising. As I said, I just expected to have a day job and be doing this as a hobby. Then it came on the national consciousness, and so whoever was playing Celtic music at the time was kind of thrust into a higher visibility than perhaps we were anticipating.”

It was in the height of this Celtic wave that Rideout received four Grammy nominations, and her album “A Scottish Christmas” hit the New York Times’ top 10 list for holiday best sellers.

Also in the midst of her years on the road, Rideout raised two daughters and a son. The ultimate multi-tasker, she said she balanced her time as a stay-at-home mom with touring with her Scottish trio every other weekend. She also went on a few longer week- or month-long tours each year.

“It was nice to be in a household that was surrounded by music, whether she was practicing or playing or having other musicians over at the house,” Rideout’s daughter Clarice Medrano said. “So at a really early age, I was basically indoctrinated with a love and appreciation for music.”

Medrano said one of her mother’s performances she remembers most vividly was on Dec. 26 one year at the finale concert of Rideout’s Scottish Christmas tour at the Kennedy Center. That morning, Medrano’s sister, Molly, fell and hit her head.

“She was supposed to be at rehearsal in an hour,” Medrano said. “She was scrambling to help her take care of this gash in her head, and trying to figure out how to get her to the emergency room and all these things.”

Despite the chaos, Rideout made it to the performance.

“One moment, in the morning, I’m seeing her patching up Molly’s head, and then six hours later, she’s on one of the greatest world stages playing,” Medrano said. “I think that’s just a testament to her amazing capability both as a mother and a musician to multitask, to take it all on and to totally kill it.”

“She is bigger than life on stage,” he said. “People would always say, ‘I’m surprised how small you are,’ when she would come down to sign CDs because she seems much bigger on stage.”

Rideout’s children carry on her musical legacy, her son, Adam, with the guitar and both daughters through singing.

“I never overly encouraged them to think of music as a profession,” Rideout said, “but just to really have music in their life for the joy of just having music in their life. Because it is a tough, tough occupation. I don’t know how I got so fortunate to make the livelihood I got out of it.”

Now retired and looking back on her music career, Rideout said she’s glad she peaked when she did, due to the new challenges artists are facing in a technologically-evolving industry.

While she does less traveling now, Rideout spends her time on different documenting and archival projects. Most recently, she’s taken on recording an 83-year-old pianist who’s spent most of his life on the same islad she grew up on in Maine and developed his own style of Americana playing.

Rideout and her husband also founded a nonprofit called CELTINO – combining her Celtic heritage with his Latino roots – that has built 43 primary schools in Honduras.

Jesus Medrano said one of his wife’s greatest accomplishments has been introducing her Scottish culture to the world.

“She was happy to bring this type of music to the big stage,” he said. “Celtic music, Irish music, before Bonnie, they were in pubs and small venues, but she took it to the big stage, and I’m proud of that.”

Reflecting on her career, Rideout said it’s the small moments that stick out, whether it’s hearing a fiddler play a piece she’s composed in a pub in Scotland, or playing with her family at a cul-de-sac block party in Old Town.

“I could easily say that some of the most memorable ones were in the biggest halls,” Rideout said, “but I think that one of the ones that I remember most was not even a concert…

“I was in Honduras way up in the mountains … There’s no electricity. The little dwellings are just dirt and floors, and it’s really rural. It’s like going back in time…

“The people where I was had never seen a violin before, and we were in one of these small dwellings, and I started to play the violin for them. People were coming out of the darkness. They heard this sound and then the women just started sort of humming along…

“I like moments like that. Where they’re small and intimate and with just a few people in the rainforest, playing music with people that are way outside your culture, but you find a common ground.”