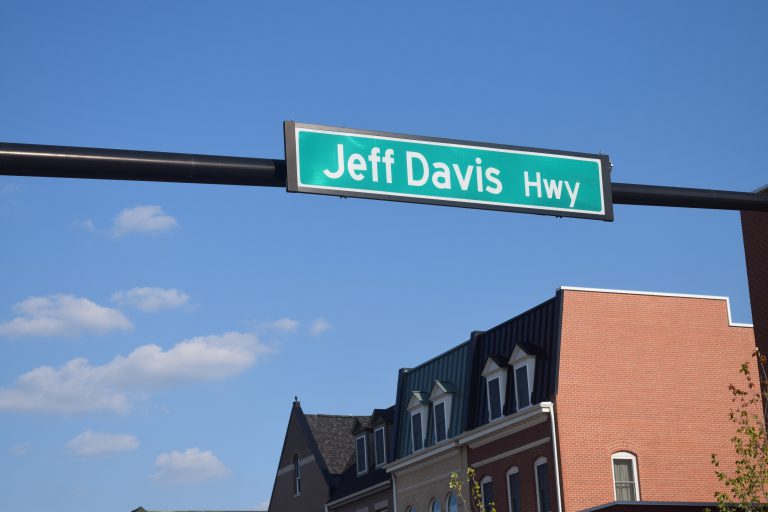 City council inched closer to renaming the part of Route 1 that runs through Alexandria from Jefferson Davis Highway to Richmond Highway on Tuesday night.

This nearly completes an effort that started in September 2016, when council voted to strip the name of the former president of the Confederate States from that roadway and set in motion a process to find a new name. The wonder is that the name Jefferson Davis remained on signs in Alexandria more than 150 years after the Civil War ended.

It’s astonishing to think that we had the Civil Rights Era and an end to Jim Crow laws and segregation – that we had a black mayor and even elected America’s first black president, who served eight years and left office – and still the name Jefferson Davis persisted on signs in Alexandria.

Names can mean different things depending on the person, but, at heart, they’re symbols. When a child is named after a parent it honors that parent and serves as a symbol of continuity and pride. When a school is named after a local leader, such as the new Ferdinand Day Elementary School in the city’s West End, it’s chosen to honor someone who made a positive difference in our city.

That the name Jefferson Davis lingered so long in Alexandria also has symbolic impact. Most people who live here are probably inured to the signs. But others likely feel offended to drive every day on a road named for someone who championed keeping their ancestors enslaved. And what message has the name Jefferson Davis sent to people who visit Alexandria? Yes, we celebrate our past, but to have for so long continued to honor this man is shameful.

While this issue should have been addressed long ago, we commend the process that has been followed in the wake of the tragic, racially motivated 2015 shootings in Charleston, South Carolina, the violence last summer in Charlottesville and the continued presence of white supremacist Richard Spencer in Alexandria. Deliberations have been measured, name changes have been considered on a case-by-case basis and emotions have been largely kept in check.

Some may quibble with the bland proposed name of Richmond Highway. Since the names Patrick and Henry are already on Route 1 as it passes through Old Town, naming the entire segment in Alexandria after the Revolutionary Era leader made sense. But the name Richmond Highway does provide for regional consistency, as this is the road’s name in Fairfax County and elsewhere in Virginia.

There are many other names in Alexandria that need to be reconsidered, including, we believe, the name T.C. Williams on our city’s only high school. But change, even when long overdue, works best when it’s done deliberately, with community consensus and widespread buy-in. There may not be consensus around changing some names. But there’s no doubt that Alexandria has no business honoring the president of the Confederate States.

Dropping the name Jefferson Davis from street signs in Alexandria is a no-brainer change – and one that should have happened long ago.