The recent developments concerning the Potomac Yard Metro should come as no surprise to anyone, given its past history and mismanagement. The proposed Metro station site is not on the Potomac Yard itself, but encroaches the George Washington Memorial Parkway, which is a federal park, and which is encumbered by federal regulations governing its uses for private development.

However, the Alexandria City staff was blissfully unaware of — or not interested in — this aspect until the federal authorities advised them that it was illegal to use the Parkway as a truck route, if there was a viable alternative, where the meaning meets the criteria, which there is. The idea of putting the Metro on the GWMP was due to WMATA’s desire to not have construction interfere with daily operations, and more importantly, by a notion that the Metro entrance had to be within a quarter mile of land bay F, where the Target retail operation is today.

These criteria effectively eliminated Option A, which was the originally proposed location, and which would be operational today had it been chosen. However, under Option B, the need to build new tracks and to put the station on the GWMP requires filling in existing wetlands with about 20 feet of infill, and to negotiate with the federal government about using a federal park for a railroad station for the purposes of servicing private development. None of these requirements would have encumbered option A, which was also less expensive.

When the Alexandria City Council approved the Metro station, they opened a process to choose the “preferred location,” but what was not divulged – and what we had to find out from the attorney representing the developers – was that Alexandria had entered into an agreement that the developer would help to pay for the Metro station, but only if Option B was built. Although the GWMP option was already the preferred one, Alexandria was advised by a consultant that they could not refer to it as the preferred option while the process of choosing it was underway, which mocks the whole idea of process.

To Alexandria’s surprise, the inclusion of the federal park in the equation delayed the process significantly, and increased the cost as well. The question then becomes, why does this Metro station need to be at the Option B location? To support a change in thinking, two salient points need to be made here. First, since Alexandria omitted the quarter mile requirement in the final Memorandum of Understanding passed by city council, it should no longer be an issue.

This is odd, regardless of how far that entrance is from the station itself.

So why is this “requirement” still determining the location of the station itself and the ramps? The answer lies in the juxtaposition of a desire for massive development at that location, and a notion that large-scale development will occur only within a quarter mile of the hypothetical entrance to be built in the future.

The second point is that the ramps connecting the Metro station to Potomac Yard are the most expensive part, due to the height needed to cross over the CSX tracks.

This is due to the “quarter mile to land bay F” rule, which increases the length of these ramps significantly, because they must cross at an angle since the station is so far away from the entrance point. As an aside, the distance between Options A and B was about 500 feet or two Old Town City Blocks, which is not a significant walking distance.

The city needs to drop the pretense of being within a quarter mile of land bay F, and it should eliminate the long and expensive northern ramp by replacing both ramps with a single ramp entering from the center of the station. Since it would be straight across, it will be much shorter and cheaper, and oddly enough, not that far from the location of the entrance to the southern ramp. While the walking distance from land bay F to the entrance changes, the distance to the station itself remains practically the same.

Never have so many fought so hard for so little, and the question is why?

At the Alexandria City Contemporary Architecture Symposium, it was announced that the construction contracts – the station without a south ramp – are being signed next week, but that due to the change to the Metro, an amendment to the Special Use Permit of the Small Area Plan will need to go before both the planning commission and the city council. After this, community input will be solicited about rectifying the eliminated ramp. If rational planning, transparency and thought do not prevail, the end result of all this could be even more density, aggravation and higher taxes. As they say, “Oy vay!” 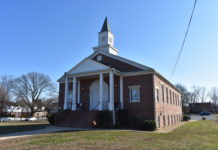 Missy Schrott - January 20, 2020
By Denise Dunbar | [email protected]   Despite repeated claims by Department of Transportation and Environmental Services staff that the Alexandria Fire Department had significant input into...