Maria Butina, a Russian gun rights advocate changed with working as a covert agent for the Russian Federation, was moved from a D.C. jail to the Alexandria jail, according to Amy Bertsch, spokeswoman for the Alexandria Sheriff’s Office. 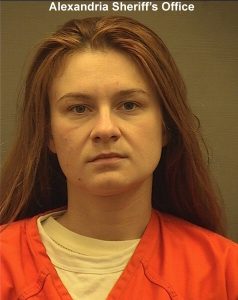 Butina was booked into the William G. Truesdale Adult Detention Center on Aug. 17 just after 7 p.m., Bertsch said. The reason for the move hasn’t been released, but the Russian Embassy alleges that it happened without notice after Butina faced cruel conditions in a D.C. jail.

Butina was arrested on July 15 and charged with 18 U.S.C. §§ 371 and 951(a) – conspiracy to commit offense or to defraud the United States, and failure to identify as an agent of foreign government, according to court documents.

She has been living in the U.S. since August 2016, when she entered the country on an F-1 student visa, according to court documents.

She is being held pending trial because she “poses a serious risk of flight based on the nature of the charges, her history of deceptive conduct, the potential sentence she faces, the strong evidence of her guilt, her extensive foreign connections, and her lack of any meaningful ties to the United States,” according to court documents.

The Russian Embassy in the United States accused the U.S. of “practices that are slightly below torture” in a press release on Saturday. The release stated Butina was arrested on unfounded accusations, subjected to a strip search in a D.C. jail, transferred to Alexandria without notice, held in quarantine with no food for the first 12 hours, then locked in a solitary confinement cell.

Bersch declined to comment on the reason for Butina’s transfer or conditions of her confinement, as the sheriff’s office cannot provide that information for federal inmates housed in the Alexandria facility.

Butina is scheduled to appear in court on Sept. 10, according to media sources.