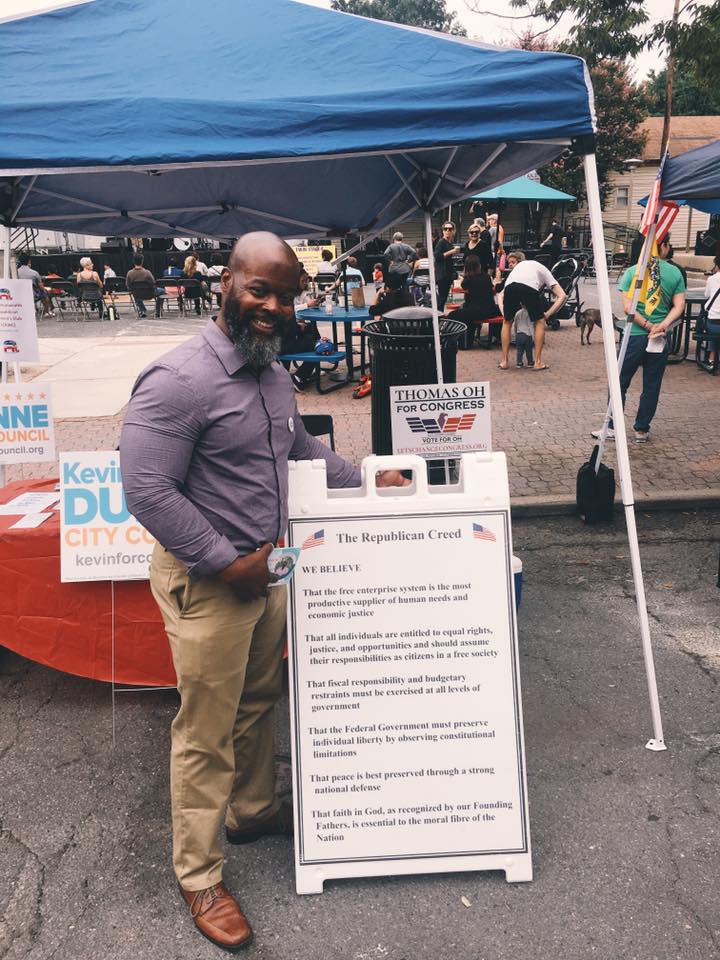 Michael Clinkscale’s journey to running for city council is far from traditional.

When Clinkscale, one of two Republican candidates on the ballot in this year’s council election, arrived in Alexandria, he was homeless and spent two weeks sleeping on a bench in Old Town.

The Ohio native, who received a bachelor’s degree in political science from Youngstown State University in his hometown and later received a law degree from Benjamin Cardozo School of Law in New York, initially worked in banking, at the National Association of Securities Dealers and JP Morgan Chase in New York and American Express and Bank of America in D.C.

After briefly starting a law firm of his own with a friend in D.C. in the 2000s, Clinkscale visited several countries in Africa and decided to move permanently to Ethiopia. He spent a decade there, working as a military contract worker and fitness instructor. He was arrested by the Ethiopian government in 2016 and, though he wasn’t charged, spent 46 days in jail before the U.S. State Department negotiated his release.

After being deported to Dulles Airport, he decided to stay in the area and come to Alexandria due to its sizable Ethiopian community.

During his weeks on the street, he took the opportunity to meet people. He’s still working within that community as a mentor and coach for low-income individuals.

“The fascinating thing was when I was on that park bench and I would stroll these streets, I got a chance to meet a whole bunch of poor people,” Clinkscale said. “They started to tell me about all of these different programs in the city – things that are helpful for poor people – so I got involved in some of those and, over time, I learned something very significant and that’s that all these poverty and poverty-related programs don’t work.”

Though Clinkscale has spent time in poverty himself, his primary platform is eliminating all programs for the poor that currently exist in the city. He, instead, advocates for the city to establish relationships with colleges like Northern Virginia Community College and with tradesmen like masons and plumbers to get training and apprenticeships for those in poverty.

He said more Alexandria residents should be given the opportunity to perform maintenance on homes in the city, specifically in Old Town.

“One of the things the city should do is act as a matchmaker for people in low-income situations, skilled labor individuals, like plumbers and carpenters, and NOVA,” Clinkscale said. “If we did that, we could take a lot of these low-income people from their current positions and get them gainfully employed.”

“I have a real problem with that,” Clinkscale said. “How do we define who is eligible to be a workforce affordable housing owner? If you say only police, firefighters and teachers, what about the person who works at The Gap or Safeway or any of the local places in the community?”

Clinkscale said money that’s being spent on poverty-related programs should be, instead, put toward large projects like remediating the city’s sewers or used to give residents a tax cut.

“If you don’t cut taxes, particularly given the fact that businesses don’t want to seem to locate to our city, … we’re going to make this community unlivable,” Clinkscale said. “Our retirees, folks who worked hard, saved up, bought a home, are no longer able to stay in their home – not because they can’t afford their home, but they can’t afford the taxes.”

Clinkscale said his other major platform points are improving the quality of the city’s school system, including by encouraging corporate sponsorship of schools, and improving the pay of public safety officers.

“Corporations know what kind of employees they want in their future. … Being able to sponsor a school, being able to have input on curriculum is one of the things that folks here in the school board don’t want. They think it’s a sacred cow. They think ‘we control the curriculum,’ but you’re doing a very poor job of controlling the curriculum,” Clinkscale said.

Clinkscale decided to run for council last year, and in April officially filed. He said he was first encouraged by friend Susie Miller, who he met on one of his many walks in Old Town.

“At first, I thought the idea was bonkers because I was just getting my bearings – I was only here a couple of months, but after a month or two, I started thinking ‘That really wouldn’t be a bad idea,” Clinkscale said.

Miller said she thought Clinkscale had good ideas, and was a good fit for council.

“We talked about how he was not in favor of making people dependent on the government and I was surprised he was even against subsidized housing,” Miller said. “Because I was listening to his philosophy on life, I said, ‘You really should run and be in political office.’ He’s very well-read, he understands what’s going on, he understands the waste of money.”

She said, if elected to council, Clinkscale would offer a different take on issues.

“I know that you wouldn’t be seeing 6 to 0 votes in favor of everything that goes in front of the city council. I know he would be transparent to the public and I know he would hold people accountable as far as how things are run in the city,” Miller said.

Sean Lenehan, chair of the Alexandria GOP Committee, said Clinkscale represents a large swath of the city’s population because he’s a new arrival.

“While Mike’s only been in the city for two years, he’s been involved, he’s active in the church, active in the community, works here in the city and he’s established roots, and that’s not unusual. Census data says 23 percent of Alexandrians only moved here a year ago. For the most part, we’re a transient city,” Lenehan said.

Lenehan said Clinkscale offers blunt takes and has an interest in issues that other candidates don’t talk about.

“He is very clear on tactics and goals and objectives of pulling people out of poverty.

He stresses job training, he stresses work and I know he’s been active in this too, about self responsibility, of working hard for yourself,” Lenehan said.

Lenehan said the general election is an opportunity to shape a council that will have an influx of new members for the first time in years.

“Either way people vote this fall, there will be four new people on city council. That hasn’t happened in quite a long time, and the four folks that will be new have never held elected office,” Lenehan said. “… If we’re going to get new views, this is an opportunity to get a new perspective. That would be my hope.”