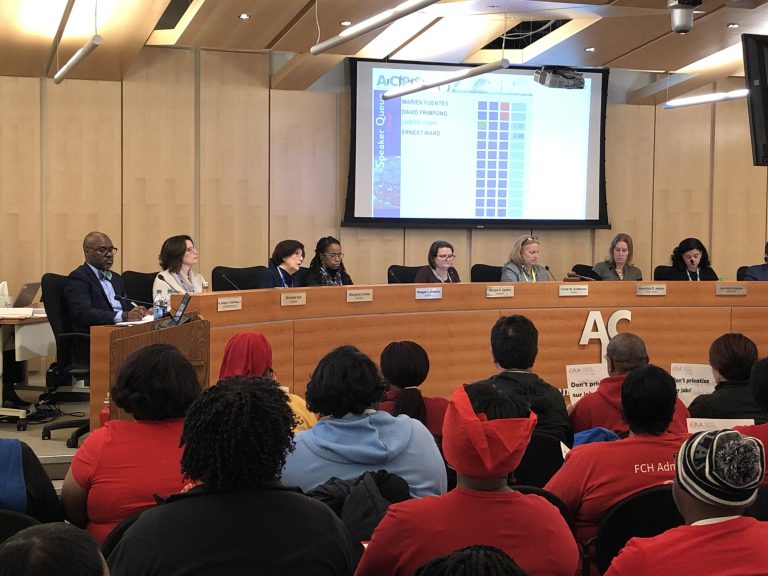 After deliberating for almost two hours, school board members voted unanimously for an amended high school plan that would address Alexandria’s capacity issues during its Jan. 24 school board meeting.

The vote allows Superintendent Dr. Gregory Hutchings, Ed.D, to proceed with planning for the Connected High School Network, part of which will involve the modernization of T.C. Williams High School’s Minnie Howard campus. Per a motion passed at the meeting, Hutchings and school staff will also explore the feasibility of a second comprehensive high school. The vote did not, however, finalize any project design.

As proposed by Hutchings, the Connected High School Network would address the ongoing capacity problems at T.C. by expanding its presence into smaller satellite campuses around Alexandria. A revamped Minnie Howard campus will become a part of that network.

“It means that all students are not isolated or in one place, that you’re able to educate students in several different ways at different locations,” Hutchings said during his presentation.

According to Hutchings, the CHSN has several benefits. Alexandria City Public Schools would be able to adapt to capacity issues more quickly by phasing in new satellite campuses over the next few years. More importantly, according to Hutchings, students would have the option to enter into smaller, more dynamic learning environments if that better suits their learning style.

“Equity is about meeting our students where they are, not necessarily where we want them to be and not having a cookie cutter approach to solving their issues or giving them a cookie cutter pathway to getting their diploma from T.C. Williams,” Hutchings said.

An initial motion by board member Margaret Lorber moved to approve the proposal and included language that would guarantee the modernization of the Minnie Howard campus and its integration into the CHSN model. Lorber’s motion also advised Hutchings and school staff to proceed with specific priorities in mind, including providing equal access to services for all students, ensuring flexibility for students as they pursue specific paths and continuing community engagement throughout the process.

The school board unanimously approved the motion with the inclusion of an amendment proposed by new board member Chris Suarez. The amendment, which passed unanimously, further emphasized the importance of equity when approaching the city’s high school capacity problem.

“We’ve heard some concerns from the community that the Connected High School Network, if not implemented effectively, could promote potentially segregated tracts,” Suarez said.

The amendment aimed to guarantee “that all children have a fair opportunity to participate in the full range of program options that are available,” with particular emphasis placed on helping minority, special education and English learning students.

Several new board members expressed concerns and reservations about the CHSN plan in general.

“As our school enrollment continues to grow, I believe maintaining one high school is going to be unsustainable,” board member Michelle Rief said. Rief didn’t completely discredit the CHSN, but said she viewed it as a model that would be better used as a support system for a second high school.

“If we do have a second high school, the satellite campuses and the early college programs, those can still be there and draw from more than one high school,” Rief said. “I can see the campus model as a short-term solution to really addressing capacity.”

Rief put forth a motion – that was later withdrawn and put forward in an amended form by Suarez – that would require Hutchings to “provide multiple preliminary design proposals for the board’s consideration, including one or more proposals that incorporate the design for a second comprehensive high school,” by the end of May.

The motion was part of a bigger push by Rief and new board members Heather Thornton, Meagan Alderton and Jacinta Green to ensure that the board and community members have the most information possible in order to make a decision.

“When you are a teacher you lesson plan so that you can formatively assess and make changes as you go,” Alderton said. “Your instruction is supported by really concrete data and in- formation. This is what the public is asking from us.”

The discussion around Rief’s motion was notably split between new and incumbent school board members.

School board chair Cindy Anderson and board members Veronica Nolan, Ramee Gentry and Lorber – all incumbents – were concerned that more data-gathering could delay a solution to a critical issue.

“We understand that that conversation [about a second high school] has truly not happened with all the due research that needs to go on, but the reason for the initial motion is that we have a bit of a crisis on our hands right now,” Lorber said.

“You need to start re- moving some variables from the table otherwise it does become hard to move for- ward,” Gentry said.

Rief and Suarez’s motion was voted through by a five-to-four margin. Anderson, Lorber, Gentry and Nolan cast the dissenting votes.