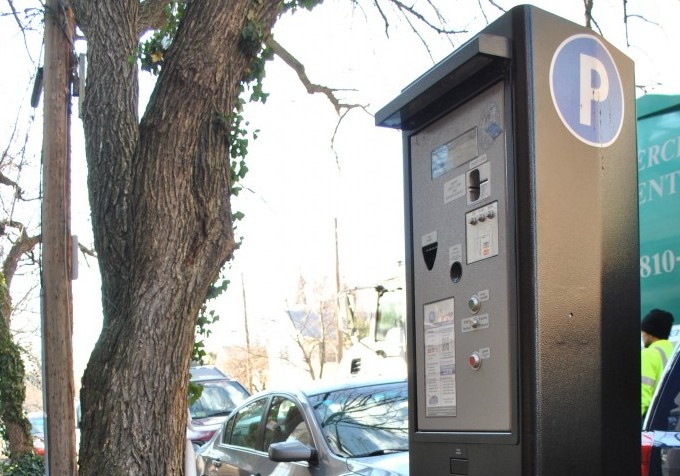 The program has achieved its intended objective of making it easier for impacted residents to park on their blocks. But others in Old Town decry the program’s accessibility and the potential for kiosks, which are generally considered unsightly. Residents in other parts of the city as well as businesses bemoan the loss of free parking for visitors to the Old and His- toric District.

At the Feb. 12 city council legislative meeting, representatives from the Department of Transportation and Environmental Services requested that council dock- et the pilot program, which expires on March 1, 2019, for final passage during Saturday’s public hearing – with the intent of making the program permanent. Council unanimously agreed to schedule the ordinance for discussion.

Even in its pilot stage, the program has sparked controversy. The pay-by- phone parking program launched in November 2016 with the intent of providing Old Town residents some re- lief from non-residents who were parking on residential streets. Under the program, residents can choose to pe- tition to make their block a pay-by-phone block.

In order to get a city block involved in the program, at least 50 percent of residents on a block must sign a petition recognizing they want their block to be designated as pay-by-phone parking. The petition then goes before the Traffic and Parking Board, which makes a recommendation to Yon Lambert, director of T&ES. A block can only petition if it is adjacent to another block already in the program.

If accepted, signage is put up to indicate that the block is pay-by-phone, and non-residents can use the ParkMobile app to pay for parking.

“What the residents have been telling the city for a number of years is, ‘Help,’” Lambert said. “They’ve essentially been saying to us, ‘Give us some support and understand that we want people to come to Old Town. We want people to experience everything we have to offer, but residents live here too.’”

During the legislative meeting, T&ES also proposed several modifications to the program, namely making the program permanent, changing the code to allow multiple adjacent blocks to apply for the program as long as one is adjacent to a current pay-by- phone or metered block and expanding the scope of the program so that any residential block, not just those east of Washington Street between Princess and Wolfe streets, can petition as long it meets the requirements.

City staff assert that the pilot program has been a success. Thirteen blocks are currently part of the program, and there are two more petitions being processed.

According to responses from an online feedback form and parking occupancy surveys conducted by the city, 79 percent of residents on pay-by-phone blocks found that parking was more available on their blocks after the pilot program was implemented. According to the same results,

67 percent of residents also indicated they would like to see the program continue as it currently stands or with modifications after the pilot expires.

“We did parking occu- pancy surveys on the blocks that had the program and then adjacent to the program and we found that there were fewer non-residents parked on these blocks but that the number of cars parked on ad- jacent blocks didn’t change significantly,” City Planner Megan Oleynik said.

However, despite the positive responses from residents, many non-residents and Old Town residents alike have started to voice opposition to the program, creating tension within Alexandria and Old Town ahead of the public hearing.

For some Alexandrians, the idea of paying for parking deters them from venturing out to Old Town.

“Part of the reason I go into Old Town is because I can park several blocks away from King Street for free,” Linda Joy, an Alexandrian, said in an email. “If they remove the free parking, I will not continue to support most of the restaurants and other businesses in Old Town.”

During the legislative meeting, T&ES also proposed several changes to the program in response to feedback from the community. Oleynik emphasized that the city is identifying ways of better informing residents of their parking options, more effectively directing people to garages with better signage and working with organizations, like Saint Paul’s Episcopal Church, that have been negatively impacted by the program.

However, community members still have concerns about the program and how it has been rolled out. Yvonne Callahan, vice president of the Old Town Civic Association, said she has been wary of the city’s choice to change and implement the program with little input from the broader community.

Callahan said she is also concerned the suggested modifications to the program would allow it to expand beyond just Old Town.

According to Lambert, the city staff intend to remain mindful of the consequences should the program expand.

“If pay-by-phone becomes more pervasive and we start adding more blocks, the question is, are we just really reallocating that space just entirely for the residents or are we making it more difficult for visitors to come?” Lambert said. “I think that’s an ongoing question we’re going to have to answer.”

Barbara Beach, a citizen activist for the elderly and former Alexandria attorney, said she worries that the program, with its focus on technology, excludes senior citizens from the city’s parking plan.

“In our society, one of the worries about seniors is isolation, so we want seniors to get out and attend programs and participate in life,” Beach said. “Basically, we’re telling seniors, ‘Don’t bother coming down to Old Town.’”

According to Oleynik, T&ES will present payment alternatives for seniors to city council during the public hearing.

“We’ve been researching what other cities do that have similar programs and looking into potentially offering a voucher program where you could buy [vouchers] at city hall and maybe keep five or six in your car and scratch off when you park, like the time and date,” Oleynik said.

Without cell phones or familiarity with apps, Beach said, a pay-by-phone system makes parking difficult for seniors whose only other options are to walk several blocks to pay at a parking kiosk or, if they don’t use apps, call ParkMobile and incur a $5 charge for each call until they create an account.

“I’m going to be on the 600 block of South Pitt Street wanting to go into Lyles-Crouch and I’m going to have to walk to half a block from King Street, right across from the court- house parking lot, to pay if I can’t use my mobile phone,” Beach said. “That’s pretty ridiculous.”

Kiosks remain one of the more contentious elements of parking in Old Town. While kiosks would help seniors, many Old Town residents say that the structures would disturb the historic fabric of their streets.

“I don’t want this to turn into a modern mall where slowly but surely the fabric is built over or removed until the historic aspects become subverted,” Robert Ray, owner of Cavalier Antiques and an Old Town resident, said.

The city maintains that kiosks are not part of the vision for the program.

“As part of the pilot program we committed that we would not be adding kiosks, the pay stations, to residential blocks,” Katye North, Mobility Services division chief, said.

In the middle of all these competing viewpoints stands St. Paul’s Episcopal Church. The church fronts South Pitt Street, a pay- by-phone block, making St. Paul’s the first house of worship affected by the pilot program.

“Suddenly there was a deterrent or people were fearful of getting tickets, which they hadn’t been worried about before,” Junior Warden Lisa Eskew said.

Caught between the needs of its parishioners and neighbors, St. Paul’s is trying to find compromise in the middle of a polarizing issue.

“Our perspective on this is to try to make things as open and accessible as possible, while at the same time trying to keep the balance of our neighbors happy, which is why we didn’t come out in opposition to the program,” Eskew said.

The church is working with the city to find middle ground where possible. St. Paul’s sent a letter to the Traffic and Parking Board on Jan. 24 advocating for potential solutions, including free parking on Sundays until 1 p.m. for churchgoers, reduced garage prices and, much to the dismay of many parishioners and residents, the potential placement of a kiosk near the church.

As controversy continues to surround the pay-by- phone program, Old Town residents, community organizations and a city council made up of mostly new members ready themselves for the upcoming public hearing. T&ES staff will present the pilot program to city council at the hearing.