The city’s controversial pay-by-phone parking pilot was docketed for possible permanent passage at Saturday’s city council public hearing, but due to an administrative error had to be deferred, to the March 16 public hearing.

The pilot, which covers 13 blocks in Old Town, has caused tension between Old Town neighbors, Alexandrians and institutions since it was launched in 2016. While final action on the program was deferred, public comment was not, and more than 20 speakers turned up to share their views.

Old Town residents testified that they have been able to find parking near their homes much easier since the parking pilot was implemented. Several detailed the positive effects the program has had on their lives.

“I can think of nothing else the city has done to more directly and positively affect my own personal quality of life,” Shelly Whitmire, an Old Town resident for 21 years, said. “I feel safer, I am able to load and unload my vehicle without double parking and I can usually expect whenever I leave town, or simply go somewhere else in the city, to park on my block near my home.”

Other residents, including 30-year Old Town resident Karen Tietjen, were quick to defend the program not as a cure-all but as a way to relieve the pressure on residents.

“The parking program has eased the situation somewhat, but it does not guarantee residents a parking space,” Tietjen said. “Rather, it creates a level playing field by promoting greater turnover of the cars.” 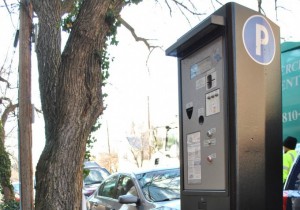 Non-residents, however, contended the program makes Old Town less welcoming and, especially for senior citizens who may not have cell phones – let alone smart phones – less accessible. Access and information were primary concerns for many non-residents.

“To me this is a program that says, ‘Katy Cannady, keep out,’” Rosemont resident Katy Cannady said. “I only have a landline phone and when I pay I use some quarters or my credit card, and this sounds like it’s going to be more difficult. It’s not been thoroughly ex- plained. I don’t understand how I’m going to make it work for me.”

Others expressed concern about the program’s potential effect on local business, though no business owners offered testimony.

Department of Transportation and Environmental Services staff proposed three alternative payment methods: a city voucher system, senior parking permits and a ParkMobile voucher system that businesses could use to absorb parking costs for their customers. Councilors Mo Seifeldein and Del Pepper urged T&ES staff to flesh out the proposals before their next presentation to council.

Vice Mayor Elizabeth Bennett-Parker spoke about the overwhelmingly positive feedback she had received from Old Town residents during extensive canvasing of the 13 blocks in the program.

“We need better ways of encouraging people into garages,” Bennett-Parker said. “Enforcement came up a lot. Continuing to work to make guest permits easier to access. I know that’s something staff is working on.”

Mayor Justin Wilson expressed surprise that, despite staff report’s findings that the program has had a modest impact statistically, residents anecdotally described an incredible impact on their own lives.

“What we’ve heard from a great number of residents on these blocks is how significant an improvement of quality of life they’ve seen,” Wilson said. “… That should speak to the benefits of this program.”

According to City Attorney Joanna Anderson, the administrative snafu that led to the pilot’s deferral was because the proposed ordinance was not published within five days of its first introduction. This failure meant council could not vote on final passage of the parking program at Saturday’s meeting.

Because the pilot was scheduled to expire on March 1, council voted 6-1 to approve an emergency ordinance to extend the pilot until March 23, which means the program won’t lapse if council approves it at the March 16 public hearing.

Councilor Amy Jackson cast the lone dissenting vote after expressing concern that the parking program did not constitute an emergency.

“Right now the issue is it does not feel like an inclusive Alexandria,” Jackson said.

Jackson wasn’t the only council member upset about the emergency action. Councilor John Chapman at first said he did not believe the situation called for an emergency ordinance, however discussion of the effects of a possible program lapse convinced him otherwise.

According to Yon Lambert, director of T&ES, if the pilot program lapsed, either the pay-by-phone signs would have to be covered up and there would be no parking regulations on those blocks at all between March 1 and the March public hearing, or the signs would be covered and replaced by the old two-hour signs. However, there would be a transition period from one regulatory framework to another resulting in a confusing mishmash of signage.

“We agreed with the city attorney in that there is a communications issue and the issue of parking use on those blocks which is potentially confusing to those that wish to park on those blocks,” Lambert said.

Wilson said a lapse in parking regulation was unacceptable.

“We have a multi-decade regulatory framework on these streets that would abruptly stop on March 1 with no enforcement and I don’t think that’s an appropriate transition,” Wilson said.

Wilson and several other council members were quick to point out that this vote, predicated on an administrative error, shouldn’t have been necessary.

“I will say generally that this should not happen,” Wilson said. “This is on us and we failed.”