When Ed Semonian first ran for the circuit court clerk’s office in 1979, he did so reluctantly. He had retired after working for years as a lawyer and legal counsel. The plan, if he won, was to serve two eight-year terms. That plan was only off by 24 years.

Semonian is finally retiring again – after 40 years as Alexandria’s clerk of the court.

For Alexandria’s lawyers, ministers, law enforcement officials and residents, Semonian, 86, has been a quiet, constant presence in a city that has changed dramatically during his tenure. Alexandria’s population has expanded, urban renewal efforts have changed the city’s landscape and Semonian’s office even moved from city hall to the courthouse. Semonian has seen it all, but he is now ready to move on with the same clear-headed practicality he brought to the job.

“If I had to do it all over again, I would,” Semonian said. “I look upon it as a function, and I did it the best I could.”

Born and raised in Alexandria, Semonian attended George Washington High School and went on to George Washington University’s law program where he spent nine years in night school to get his undergraduate and graduate degrees.

Public service wasn’t the path he originally saw for himself, Semonian said. By the time he entered the clerk’s office, Semonian had already had multiple careers. He had spent time working for a consulting firm in New York City, practiced law as a solo practitioner and, later, as part of a law firm in Alexandria before providing legal counsel for SunTrust Bank.

Semonian retired from SunTrust in 1979, the same year Freddie Jackson, the frontrunner for the circuit court clerk’s post, passed away after suffering a heart attack.

“My phone began to ring and [the judges] asked me to reconsider taking [Jackson’s] place and running for the clerk, which I decided to do in a weak moment,” Semonian said.

Alexandria’s citizens elected Semonian as the city’s circuit court clerk for the first time that year. It is a position that folded in his decades of experience in law, real estate and man- aging. The clerk’s office has its hands in almost every facet of Alexandria life, according to Semonian.

“It is the office of public record for all real estate transactions in the city,” Semonian said. “… We also have a public service section that’s responsible for taking in all cases that are filed. We issue lots of marriage licenses and we do numerous things for the public. Notaries come in, ministers come in to qualify, we issue subpoenas.” 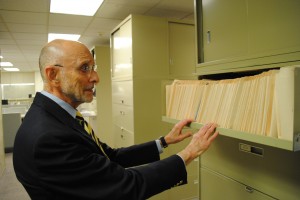 As Alexandria has changed, so has the clerk’s office. Throughout the early 80s, Semonian aimed to make sure that change happened as smoothly as possible, he said. During his first two terms, Semonian worked to shift the office away from paper records and into an early scanning system, a change made out of necessity. The city’s population had increased dramatically, Semonian said, which meant more work – and more paper – for the clerk’s office.

“We’re totally mechanized at this point,” Semonian said. “We’ve gone through several computer programs to update the records of the office. Everything gets scanned and we’ve just had to because we’re overwhelmed with paper.”

Semonian’s office also helped implement the Alexandria Justice Information System, an online resource for accessing documents in the clerk’s office. The system, which is one of the oldest in Virginia, has received criticism for its periodic outages, which have sometimes lasted for months.

The system by which people interact with the clerk’s office has changed, but the reputation of the office has remained consistent under Semonian’s leadership, according to Lonnie Rich, a partner at the law firm Rich Rosenthal Brincefield Manitta Dzubin and Kroeger.

“For the public, the clerk’s office is very easy to deal with, and I think it all starts from the top because he’s easy to deal with,” Rich said. “… I think the good reputation the office has is due in substantial part to Ed Semonian and to his consistent leadership over the years.”

For Rich and many others, the clerk’s office has come to represent the finest qualities of the man who runs it: a quiet, competent work ethic and a kind and thoughtful approach to public service.

“He’s not a flamboyant guy. He’s not a headlines guy,” Rich said. “He does his job. He’s a professional.”

Despite the praise for his job performance, Semonian said now is the right time to step down.

“I’ve contributed as much as I can contribute and from this point on my contribution would not be what it should be just because age becomes a factor,” Semonian said.

Semonian might be leaving the courthouse, but those he influenced through the years will be his legacy. Commonwealth’s Attorney Bryan Porter is one of many attorneys to whom Semonian administered an oath, and Semonian’s words of advice on that day remain with Porter 18 years later.

“He reminded me that the oath is what the whole thing was about and in a very gentle way reminded me to focus on the words of what I was taking an oath to and remember that the office is bigger than any one person,” Porter said.

Although he is stepping down from public service, Semonian said he intends to stay active. He said he is looking forward to spending time with his daughter in Raleigh, North Carolina, and paddling on the Potomac River in his canoe. He is also active in First Baptist Church of Alexandria, helps with several charities and serves on local boards.

Semonian said he ran for the position 40 years ago because he thought he could help people, even if in a small way. Even in retirement, he is not done with that work.

“I like to help people,” Semonian said. “I think that’s a part of not only what we’re here for as part of this job but why we’re here as part of the human side of life.”