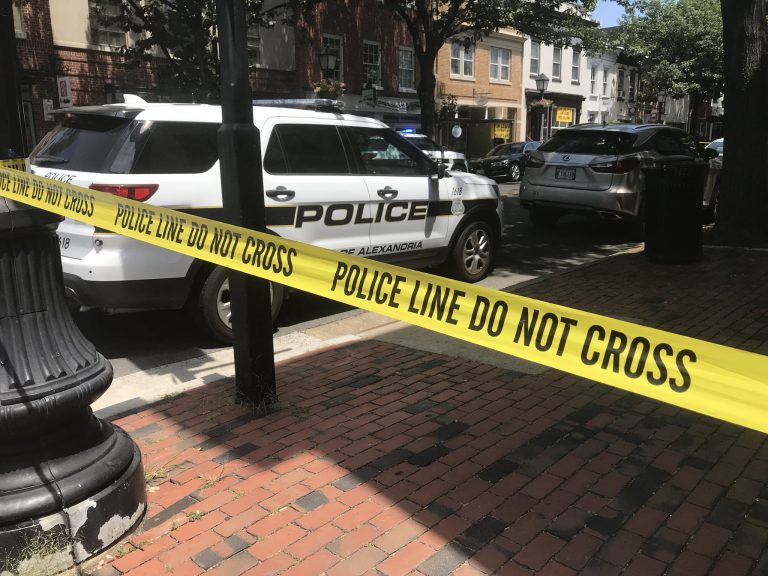 Serious crime in Alexandria decreased 1.7 percent in 2018, marking the fifth year in a row that offenses have gone down, the Alexandria Police Department announced on May 8.

The Federal Bureau of Investigation classifies these serious crimes, which include crimes against people, as Part I crimes. These include homicide, rape, robbery, aggravated assault, burglary, larceny and auto theft. 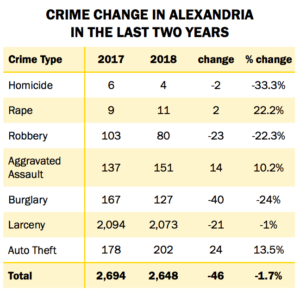 “Aggravated assault continues to be an issue for the city,” Brown said. “In many of the cases, the victim and the suspect know each other, many of them come out of difficult domestic relationships … and that’s a tough nut for us to crack, but we’re going to make an effort to do it with our friends from [the Department of Community and Human Services.]”

As for the increase in auto thefts, Brown said a lot of the cases were a result of residents not locking their cars or in some cases, leaving their keys in the car.

“We would encourage all residents in the city to make sure you lock your cars and make sure you take all the valuables out of your cars,” Brown said.

The police department has not released Part II crime data for 2018 yet, though Brown said it will be made public soon. Part II crimes include simple assaults, fraud, weapon violations and drug- and alcohol-related offenses.

“We’ve had a significant decrease in the Part II crime,” Brown said. “The biggest one was the number of drug and narcotic offenses that we’ve dealt with in the city, and we had about a 34 percent drop. Then, we also saw a similar drop in the number of driving under the influence arrests. We think that’s attributed to people starting to use ride-share and cabs and other forms of transportation.”

In addition, Brown said there was a 12 percent decrease in vandalism and destruction of personal property from 2017 to 2018.

Brown cautioned against reading too much into the year-over-year percentage changes. Since Alexandria generally has a low crime rate, small fluctuations in incidents can lead to larger percentage changes, according to the news release.

“It’s a privilege to work in the city with the fine police department that the city has,” Brown said. “The men and women here try to make this city as safe as possible, and these numbers are encouraging, and we hope that they continue in the same direction, and we knock down some of these increases that we’ve seen over ’18.”

Update: APD announced on May 21 that nuisance crimes decreased by 23.5 percent in Alexandria over last year. There were 2,445 nuisance crimes reported in 2018, down from 3,194 in 2017, according to a news release. Nuisance crimes include destruction, vandalism, prostitution, drug and narcotic offenses, gambling, disorderly conduct, driving under the influence, drunkenness and liquor law violations.

(Scooters in Alexandria Part 2: For riders, e-scooters are more than just a fad)