Tucked away in the back of T.C. Williams High School, nestled between old rolled-up graduation curtains and chained-up bicycles, one of the school’s most successful teams aims for a world championship.

Over the past five years, Titan Robotics has quietly built a reputation as one of the most skilled robotics teams in the DMV area – and an active member of the Alexandria community.

Last week, the team travelled to Detroit to face off against competitors from across the globe at the World Championships.

“This year during kickoff, we asked everyone, ‘What is our goal?’ and I vividly remember [a team member] saying, ‘This year we want to build a robot that will go to Worlds and can compete and be a good robot,’” Olivia Ernst, a junior and the team’s fundraising lead, said.

Titan Robotics isn’t like most teams at T.C. Williams. Instead of the squeak of shoes on a gym floor or the crack of a baseball bat, Titan Robotics practices are accompanied by the hum of a buzzsaw and clickety-clack of keyboards.

Without a coach, the students have led the charge themselves. There are adult mentors, but students have learned how to find practice space, manage the team and fundraise with limited supervision. As a result, for those that have stuck with the team over the last few years, the journey to Worlds has been anything but straightforward.

Leslie Lytle, the senior team president who has been with Titan Robotics for four years, said the squad wasn’t even in the high school for its first three seasons. Instead, they operated out of TechShop, a maker space in Crystal City.

The location was limiting the team’s potential, Lytle said. The team was small and could only practice on weekends because students couldn’t always make it out to Crystal City after school.

“We decided for our team to become more sustainable and to have greater access to the whole T.C. community, we really needed to work at the school,” Lytle said.

They worked with the school board and administration to get space at T.C. Williams, and in 2017 Titan Robotics moved into a storage closet in the back of the high school. It was a start. They eventually expanded into the adjacent space, which now functions as a workshop and classroom.

Going from a storage closet to the world stage was no small feat, especially for a largely student-run organization. The team is more than just a group of engineers; some members do social media, others marketing or fundraising and others graphic design.

There are around 70 registered members of the team, and while not every student comes to every meeting or practice, the group’s “all are welcome” philosophy has made Titan Robotics a team of students with diverse interests and a common goal.

“For me this team has such a great sense of family,” sophomore Katherine Donnellan said. “This year has actually gone through a lot of hardships, so even though I hav- en’t been that open about it to the team, I’ve been able to find support through the team for that.”

For the Titans, the season really kicks into high gear in January when the specific game to be played with robots that season is revealed via webcast.

Once the game is determined, the next six weeks are dedicated to the robot build. Students spend hours after school and on weekends creating their mechanical competitor and preparing for competition season, which starts in mid-February and lasts until April with district and world championships.

Lytle said, for the past three years, the team’s goal has been to make it to Worlds. The last four seasons, the Titans have gone to the DMV district championship, but a spot in the world championship remained elusive – until this year.

With a solid district championship performance, held in mid-April at George Mason University, the Titans qualified for Worlds. From April 24 to 27, they battled all the way to the quarterfinals with their robot, named “Guilloutina,” before falling to the alliance of Automaton Nation, RoboActive and three-time world champion The HOT Team.

Weighing 125 pounds and standing 8 feet tall at its highest point, Guilloutina is the best robot the team has built, Lytle said. After qualification matches, every robot is ranked and the top eight teams become alliance team captains and can pick and choose two other robots to ally with them. Guilloutina was consistently chosen by high-ranking teams due to its incredible efficiency and scoring capability.

“It’s very good at cycling the game pieces, so delivering the cargo and the hatch panels to all the different scoring locations,” Lytle said. “We can deliver them anywhere on the field, so that’s kind of what our big strength with our robot is.”

The team aims to create a permanent pipeline of robotics team members by working off the field to promote robotics programs throughout the city.

“We created nine [teams] for students in grades K through eight in the past year,” Ernst said. “We started summer camps last year and then we’re expanding to five this year. Our goal is to have a robotics at every ACPS school at every level.”

“We’re working on creating a pipeline for students that are on our younger teams right now so that later on when they’re in high school they can be a part of our team,” Donnellan said. 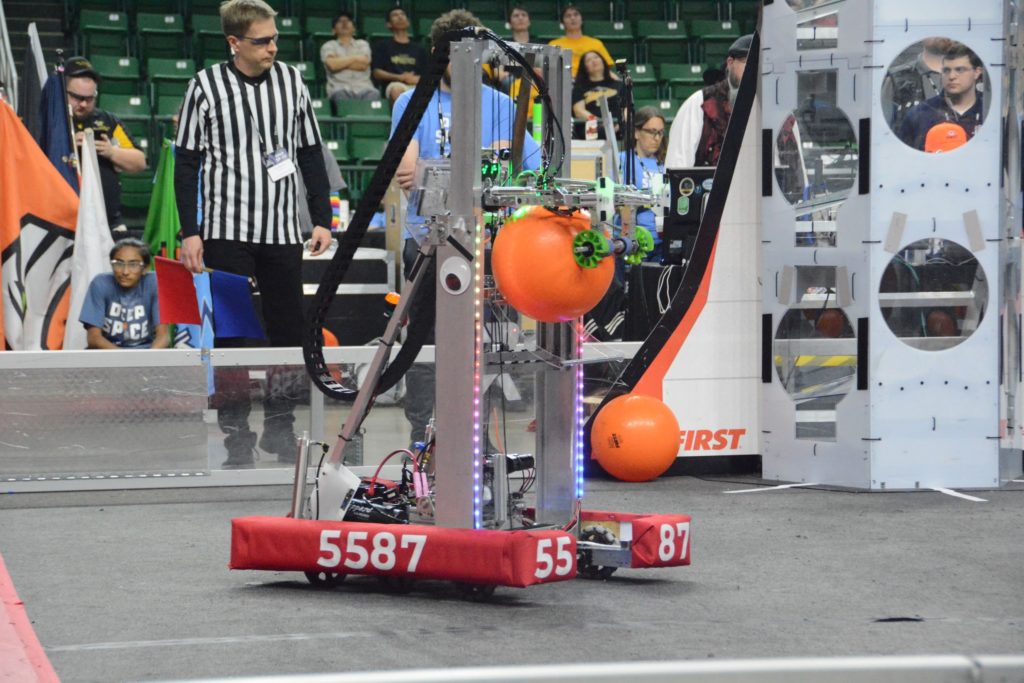 The team’s robot, Guilloutina, delivers a piece of cargo to a scoring location. (Photo credit: Majlis Walker)Over the past five years, the students in Titan Robotics have become active proponents for STEM and robotics education in Alexandria City Public Schools.

“Students that do [robotics] are more likely to want to go to college, more likely to do well in school,” Lytle said. “Their communication skills are better. There’s just benefits that regardless of what career path you’ll end up going in, it’s going to help.”

In order to afford these programs, the team emphasizes fundraising and grant writing. This year, the team purchased a CNC router with funds gained through partnered community events in Del Ray. The team raised $16,000 during Spring2ACTion, all of which will go to- ward starting robotics teams for younger students.

Ernst and other team members consistently write grants and have created partnerships with companies like Boeing and Lockheed Martin. Fundraising accounts for the majority of the team’s budget.

The team’s world championship performance is the culmination of years of hard work and countless successes and failures. Even though the team lost, as long as it inspires other ACPS students to pick up the torch, the Titans have succeeded, Lytle said.

“This is really the one thing in high school I’ve done where we are creating real change, and this is a program that I think will be able to last throughout and I hope that when I’m an adult I can come back and kids are still here building robots and having a good time,” Lytle said.

Can’t wait to get involved with Titan Robotics? Check out the team’s summer camp options here.