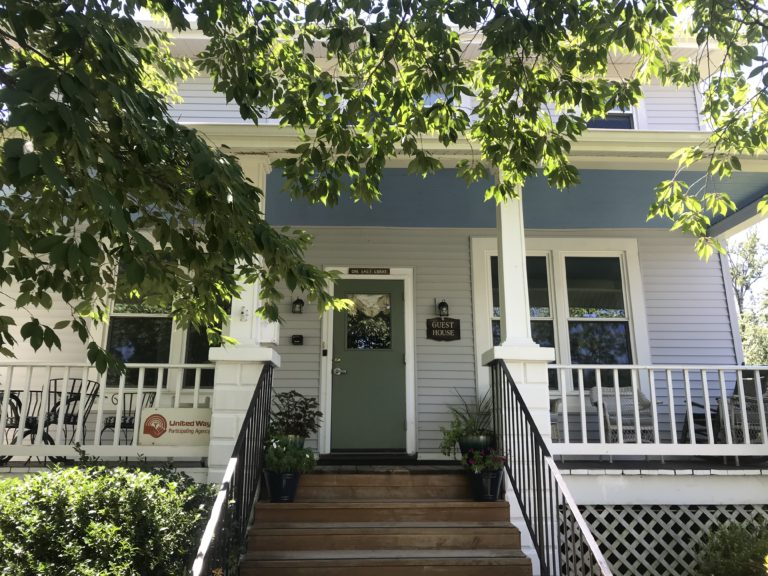 One Friday night in 2005, Terry Garrett decided she had had enough.

She was in the midst of her second stint with Friends of Guest House, an Alexandria-based nonprofit that aims to help women who were recently released from incarceration reenter the community.

She had packed her Safeway bag of belongings and was ready to go out into the street, without a job or place to live. Kari Galloway, the program’s newly-minted director, pleaded with Garrett to stay through the weekend. If she still wanted to leave then, Galloway told her, she’d help her move.

“On Monday morning, there was a note on my desk that said, ‘I’m sorry,’” Galloway said. “She went upstairs and cried and cried, just decided, you know, like, ‘Maybe I should try to do the right thing this time.’”

Fourteen years later, Galloway is still the program’s director, and Garrett works as a volunteer, helping other women who are dealing with addiction reenter society and recover as she did.

“Prior to going, I was angry, bitter, lonely, just miserable,” Garrett said. “That Monday, when I came back to work, I was a different person. I became different. I became willing … willing to change.”

According to a 2018 study by the American Civil Liberties Union of Virginia, women in the state are incarcerated at a higher rate than both men and women nationwide.

With demand high – the program receives about 400 applicants annually, Galloway said – and the opioid epidemic affecting people across the state, Friends of Guest House has received requests from the state to branch out further.

“There’s not a lot of resources [around the state,] and there’s no program like this,” Galloway said. “There’s a lot more economic opportunity here.”

On June 11, Alexandria City Council voted unanimously to loan $145,000 to the program to acquire a property on South Payne Street, allowing it to expand its membership from 25 to 31 people.

Currently, nine of the participants of the program are housed in its headquarters, a century-old house located on East Luray Avenue.

And while they’ve received support from the community, which recently helped them build a “peace garden” in the backyard, their existing facilities are in need of some TLC, Galloway said.

The Friends of Guest House program lasts for six months and provides women with food, shelter and a structured schedule of activities.

“We have a workforce program – Monday through Friday, nine-to-five – kind of mimicking a regular workday,” Galloway said. “We try to get back into the flow of things.”

Garrett was one of them.

“I was going into my 20th, maybe plus, year of addiction,” she said. “I was homeless, my children were gone. … I think I was physically, mentally and emotionally tired. I was done, and I knew I couldn’t keep living the way I was living.”

Now, Garrett said she still works at Friends of Guest House to keep the cycle going and to give others an opportunity to recover as she did.

“The staff gives us chances to do things we never thought we could do,” Garrett said. “Because we’re an ex-offender, you know, who would trust me? That’s the thoughts we have, going through our process.”

Galloway agreed. She said the women within the program were what kept her doing it for more than a decade. It hasn’t always been easy, she said. Just weeks ago, an alumna of the program died of an overdose.

“What would be nice is if we could actually treat people instead of putting them in jail or prison,” Galloway said. “None of us would have liked to be judged by our worst comments or worst decisions.”