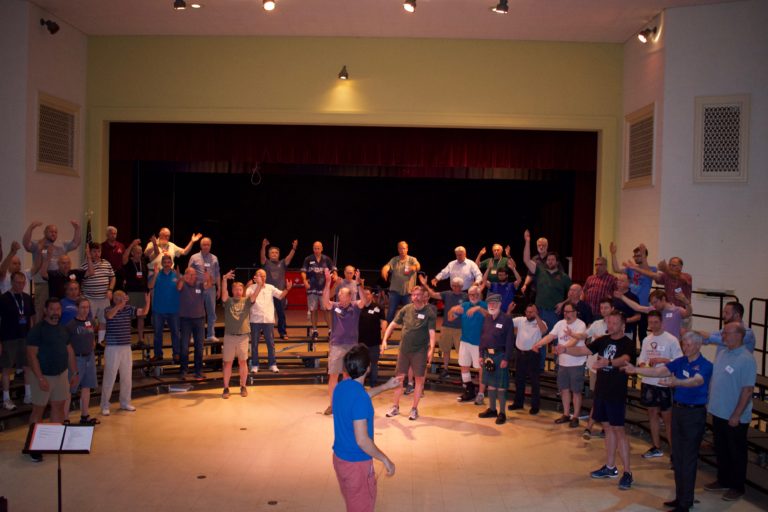 The Alexandria Harmonizers, an Alexandria-based men’s barbershop chorus, are touring in the United Kingdom until Aug. 12. The tour includes performances in Dundee, Scotland, one of Alexandria’s sister cities, and in Edinburgh, Scotland, at the Edinburgh Festival Fringe.

The Alexandria Harmonizers have travelled abroad before, to China in 2012 and to France in 2014, according to their website. But the trip to the United Kingdom is special because of the connection between Dundee and Alexandria.

While Alexandria’s most well-known sister city is Caen, France, Alexandria also has a relationship with Dundee, Scotland. Alexandria and Dundee have been sister cities – meaning they promote educational and cultural exchanges – since 1993, according to the Dundee Alexandria Twinning Association’s website.

Joe Cerutti, the artistic director of the Alexandria Harmonizers, said the group decided to look into performing in Dundee after pursuing a performance at the Edinburgh Festival Fringe.

Fringe festivals are art festivals that feature alternative or experimental performances or exhibitions, according to the Oxford English Dictionary. The Edinburgh Festival Fringe, the oldest and largest fringe festival in the world, is known for drawing thousands of performers of all genres to hundreds of stages throughout Edinburgh, according to its website.

Cerutti said the Alexandria Harmonizers’ participation in Edinburgh Festival Fringe is unusual. “Barbershop harmony … [is] one of the very few forms of music that is truly indigenous to America, and you don’t see it at things like European fringe festivals,” Cerutti said. “So if there’s anything we were excited about doing, it’s really representing American music.”

After locking down a spot in the Edinburgh Festival Fringe, the Harmonizers decided to include a stop in Dundee on their tour of the U.K.

“It just happened to be that nearby [Edinburgh] was Alexandria’s sister city, Dundee,” Cerutti said. “And that’s what caused us to say, ‘Wouldn’t this be a cool thing if we not only went and did [the festival], but we went and did something on behalf of Alexandria as well?’”

The performance in Dundee will also include performances by soloist Brooke Coventry, the Dundee Gaelic Choir and the Monica McCann Irish Dancers.

“We get a lot of other barbershoppers who are travelling to Washington and while they’re here, this is a stop, just like the Washington Monument and the Capitol building,” Brad Jones, the tour coordinator, said. “If they’re barbershoppers they want to swing by and watch a rehearsal. We do the same thing when we’re travelling.”

Of the 100 men in the chorus, about 55 are on the United Kingdom tour. The youngest member of the Alexandria Harmonizers is in his teens, and the oldest is approaching 90 years old. A majority of the chorus is composed of amateur singers.

“The message that we bring is that you don’t have to be the winner of American Idol or America’s Got Talent,” Cerutti said. “There are opportunities at any level, for any age, for any quality singer, right here in our own community.”

Shawn Tallant has been with the Harmonizers for more than eight years, and he now serves as the president of the organization. A lifelong singer, he said that the prospect of hard work drew him to the group. “I was looking for an organization, and I always tried to choose an organization [where] you’re going to work hard, and Harmonizers sort of fit that,” Tallant said. “They’re at the top of their game, but at the same time, they’re at the top of their game with community and everything else … so to me it’s a whole package.”

The Harmonizers work to bring singing out of the rehearsal hall and into the community. In Alexandria, they offer youth singing workshops and participate in fellowship programs. Last year, they co-hosted a Men’s Choral Fellowship at the Alfred Street Baptist Church, according to their website. While in the UK, they will offer a workshop with the Cottontown Chorus of Bolton, England.

“We like taking our music where there are other singers, because it’s fun to interact with other singers,” Cerutti said. “But it’s also really important for us to take our music to places where people are not doing a lot of singing, to show them not only how fun it is, but that it can be done by amateurs of any age.”

More than anything, the Harmonizers said they want to impart the joy of singing to audiences.

“If more people would get together and sing, there would be less strife,” Tallant said. “I think one of the ways I’ve heard [Cerutti] say it is, ‘How many people leave choir practice and on their way home, decide to rob a 7-Eleven?’ You just don’t see that. It’s that community. It’s that bonding. It’s a lot of things. So if more people would just sing, there would be less strife.”

The Harmonizers setlist, which they will perform not only in the U.K. but also at their fall concert in September, includes “For Good” from “Wicked,” “Blow Gabriel Blow” from “Anything Goes” and “Circle of Life” – the show’s finale – from “The Lion King.”

Before the group performs “Circle of Life,” member Bob Blair addresses the audience in a prepared monologue that echoes the Harmonizers’ message. He ends his address with the words, “With music in our hearts, we can change the world.”