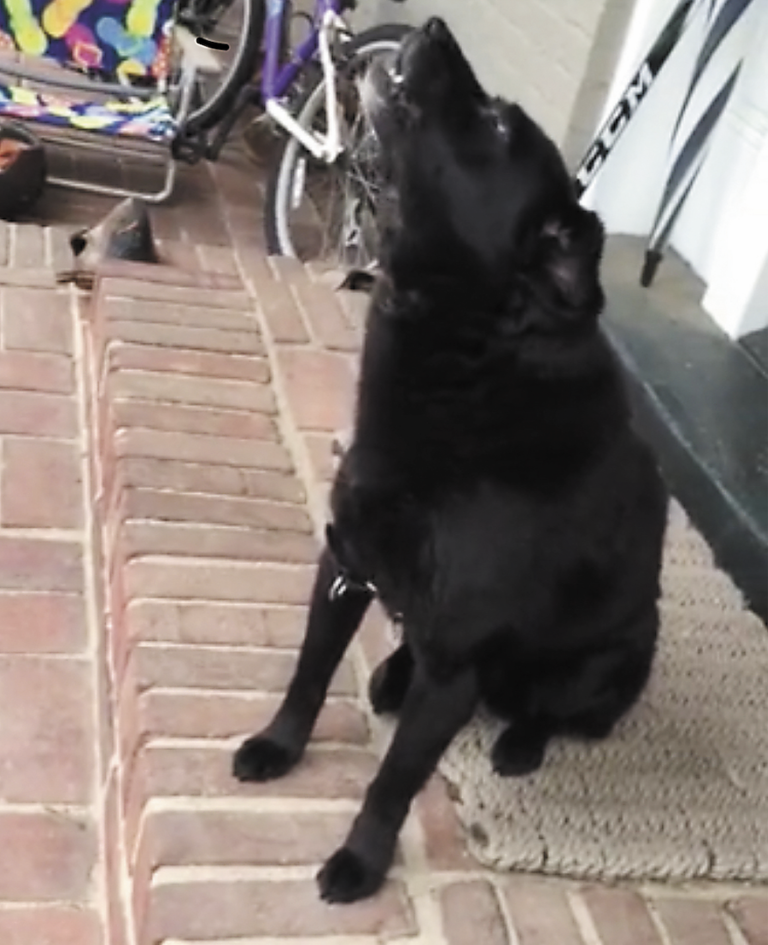 Annie Dunbar, a mixed breed dog with a musical bent, died Aug. 2 at VCA Alexandria Animal Hospital. She was 16.

Annie was a special dog, yet she was everydog. She amazed visitors with her love of music, particularly church bells. When the 6 p.m. bells at the Basilica of St. Mary would chime, then play two hymns, Annie would sing along.

Annie eagerly awaited 6 p.m. each day, appearing restless as the time approached. She would listen attentively as the chiming started, then the song would begin building in her throat. Annie would eventually break into a full howl, singing along until the chiming stopped. Happy, she would then return to her regular dog tasks.

As is often the case with mixed breed dogs, Annie’s various parts fit somewhat oddly together on her body. She weighed only about 30 pounds at her heaviest, but had a thick, barrel chest paired with slender legs and delicate paws. Her tail was generally curled up over her back, except when she felt sad or bad – then it would drag on the ground.

Annie’s notable accomplishments included her second-place finish in the 2008 Ada, Michigan “Cute Dog Contest.” The fact that her cousin, Baby, was the only other contestant did not diminish this achievement.

Annie loved people, particularly her family, but was the boss of other dogs. David from Olde Town School for Dogs once said if Annie were human, she would have been a CEO. Named after one of Thomas the Tank Engine’s passenger coaches, Annie tolerated the other dogs in her household, but had little time for outside dogs.

When Annie’s health began failing a few years ago, she gradually lost her hearing. When she could no longer hear the church bells, she ceased singing.

Annie Dunbar was born during the spring of 2003 in the vicinity of Moore County, North Carolina. She was a stray who was living in the Moore County Animal Shelter when her forever family met her at an adopt-a-pet day at the mall in Pinehurst, North Carolina during President’s Day weekend in 2004. Although the family already had one dog – and weren’t really looking for another – they fell in love with Annie and decided to adopt her.

The adoption almost didn’t take place because her family was leaving North Carolina on President’s Day, but Annie had not yet been spayed. It was the shelter’s policy not to adopt out any animals that had not been spayed or neutered. It seemed like an impasse: Annie’s new family couldn’t return to pick her up for another six weeks, while the shelter could only keep her for four weeks before euthanizing her.

Annie’s life hung in the balance while her new family and the shelter tried to navigate between rules and compassion. In the end, they reached a compromise. Her family could take Annie if they promised to have her spayed within a week, keep her away from unneutered dogs in the interim and fax the shelter a copy of the certificate showing she had been spayed. Her family agreed and complied.

Her family never forgot the kindness the staff at the Moore County Animal Shelter displayed that day. While rules exist for a reason, common sense also has a role. The animal shelter staff had the wisdom to see that, and a wonderful dog lived another 15 years as a result.

Annie is survived by her family, siblings Lucy and Hercules and cousins Baby, Kona and Guinness. She was predeceased by her sibling Clarabel.

Annie’s family encourages readers to support Alexandria’s Vola Lawson Animal Shelter, and animal shelters in general. They connect dogs like Annie with their forever families on a daily basis.