There was good news and bad news for Alexandria City Public Schools in the Standards of Learning test results for the 2018-2019 school year, which were released on Aug. 13. The results reveal a significant, division-wide increase in math paired with slight decreases in all other subject areas. ACPS continues to lag behind state averages in every subject.

Local math SOL scores increased by nine percentage points, from 61 percent of students testing proficient in the 2017-2018 school year to 70 percent of students testing proficient this past year. That equates to a sizeable 14.8 percent math gain year-over-year. However, a Virginia Department of Education representative cautioned that a recent change in SOL math testing methods makes comparing scores somewhat difficult.

In all other subject areas, ACPS scores decreased by one to three percentage points over the past year.

“We’re still not where we want to be,” Superintendent Dr. Gregory Hutchings, Ed.D, said. “I don’t want to have a parade in regard to the math scores because I believe in us aiming high. Our kids deserve to have a high-quality education. … We’re just not there yet, but we’re seeing progress, which is allowing us to know that we are moving in the right direction.” 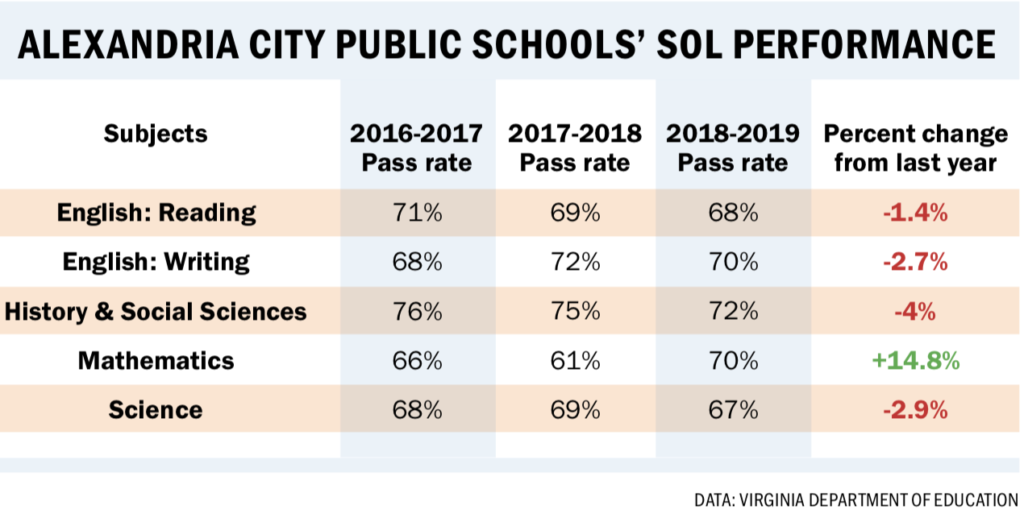 Alexandria’s overall increases and decreases this year roughly coincide with statewide trends, but district scores remain at least 10 percentage points below state averages in every subject area. Despite the rise in local math SOL scores, the district average of 70 percent remains behind the state average of 82 percent proficiency.

According to Charles Pyle, director of media re- lations for the Virginia Department of Education, some of the trends in state- wide 2018-2019 SOL scores were the result of testing changes that took effect this past year.

“Under the new regulations, once a student has met his test-related diploma requirements in a subject area, then the student doesn’t have to take additional end-of-course SOL tests unless it’s required by federal law,” Pyle said.

The impact of the new regulations was most noticeable across the state in history, a subject with no federal requirement to test students, Pyle said.

“Particularly with history, you have students taking far fewer tests than previously and the only students now who are being tested in history at the high school are students that haven’t already met the diploma requirement in that area,” Pyle said. “So, it’s not surprising perhaps that we see a four-point drop in the statewide pass rate for history, primarily because of the impact of those changes at the high school level.”

Those changes, as well as a 2016 revision to Virginia’s math standards that necessitated entirely new tests, took effect in the 2018-2019 school year. That being said, local math SOL increases in every demographic are not the sole result of new testing standards.

Math was a conscious area of focus for ACPS in the 2018-2019 school year, after a precipitous five percentage point drop the year before, Hutchings said.

For the 2018-2019 school year, ACPS implemented a refined curriculum that aligned with the new math Standards of Learning, held quarterly meetings with the principals and teachers from every school in the district and invested in professional learning in that area for teachers.

“The major thing for us is that we put a huge emphasis on professional learning for our staff, specifically in math,” Hutchings said. “There was a significant focus on math because math has been an area for us that we have seen a decline over time over previous years. It’s always been a deficit area for Alexandria City Public Schools.”

Hutchings said that strategy will now be applied to English reading for the upcoming school year.

The increase in math tells only part of the story. There are slight but steady decreases – what Hutchings called “flat” data trends – in the district-wide averages, but more significant decreases – and increases – for certain demographics that are indicative of ACPS’ ongoing systemic inequities.

“I really believe a lot of the flat data that you see across the board is due to the fact that we do have some inequities in Alexandria City Public Schools,” Hutchings said. “We have to just admit it and we have to own it and now we have to do something about that.”

On the other hand, the pass rate in English writing scores for Asian students also had one of the highest increases in the district, jumping 15 percentage points from 78 to 93 percent. 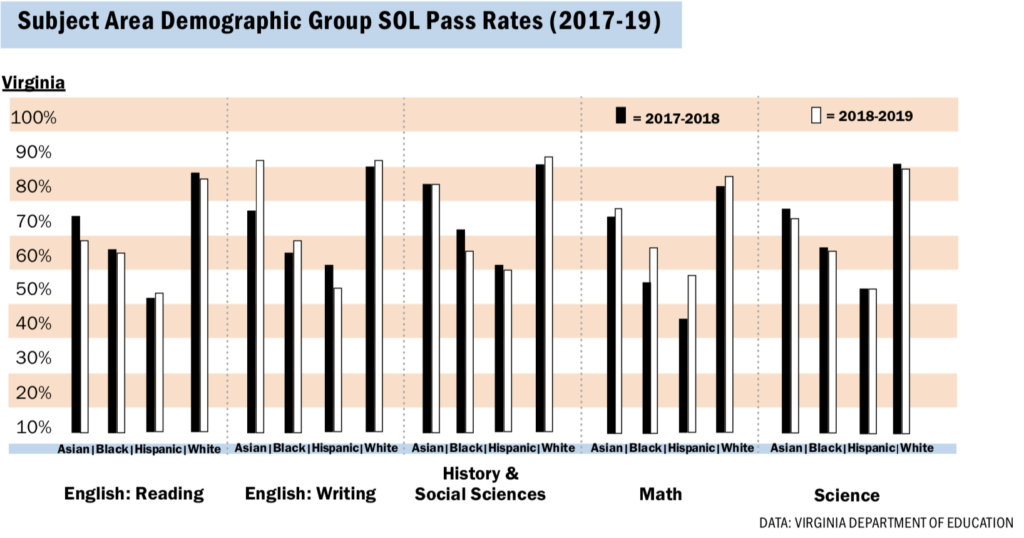 Maintaining a trend from the past two years, there was also a significant gender gap, with female students scoring higher than male students in every subject area.

With 61.45 percent of students identified as economically disadvantaged and 30.89 percent as English learners, according to ACPS data, Alexandria has a different set of demographics, and therefore a different set of challenges, than other nearby school districts, Mayor Justin Wilson said.

ACPS is taking steps to put solutions in place that can begin to address systemic issues, Hutchings said. This year, ACPS is starting to train its staff in what Hutchings called the building equity taxonomy, a method that aims to address equity challenges on a school-by-school basis, in addition to district-wide efforts.

“We’ve always been in this practice of just being equal,” Hutchings said. “Equality and equity are two different things. Being equal is not enough. We need to be equitable and I think that that is the difference we’re seeing this upcoming year.”

On the city side, Wilson is also looking to improve early childhood education and after school services.

“Most of the kids who receive after school services in the city receive it from the city in the form of the city rec programs and in other city facilities,” Wilson said. “That’s an area where I still maintain we have an opportunity to improve quality and accessibility.” 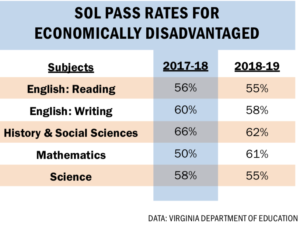 Although SOL scores are important for state accreditation of schools and measure a certain kind of progress, they present a limited perspective of student growth, Hutchings said. Individual growth is often lost in standardized test scores, he said.

With the number of English learners in ACPS, some of whom have come to the United States from traumatic situations in the Middle East and Latin America and some of whom still face traumatic and challenging home situations, SOL test scores are not always indicative of academic, emotional or social growth, Hutchings said.

Hutchings noted the case of a student who moved to Alexandria two years ago and had to learn how to read and write English.

“There is plenty of research that shows standardized tests are a bad tool for measuring learning,” Rief said in a statement. “My personal view is SOL tests are misused and overemphasized, which can lead to inaccurate analysis, narrowing of the curriculum and teaching to the test. I think there are better models out there. As a school division, I believe we need to continue to focus on providing high-quality instruction across all subjects and equitable opportunities to learn for all students.”

With new accreditation requirements that took effect last year and place less emphasis on SOL scores, the Virginia Department of Education appears to agree that standardized testing isn’t the only determinant of academic success.

As part of the accreditation process, the state will now consider “the academic growth of students making significant progress toward meeting state benchmarks” in English and math, as well as a school’s progress in closing achievement gaps in English and math, raising overall achievement in science and reducing absenteeism, according to the Virginia Department of Education.

High school accreditation, in particular, will now also be evaluated based on a school’s ability to increase graduation rates and reduce dropout rates.

“I’m excited about … the fact that the state, they have realized it’s important not to just look at how many kids are proficient because some kids are making growth over time that are not proficient and that schools and school divisions need to receive some type of credit for that,” Hutchings said.