On the first Friday of each month, a crowd of uniform-clad school children parades through the southeast quadrant of Old Town.

An age-old tradition, the students of the Saint Mary school on Green Street have marched in silence to mass at the Saint Mary Catholic Church – now a basilica – on South Royal Street each month for decades.

The Basilica School of Saint Mary celebrates its 150th anniversary this month, and while a lot has changed during the past 150 years, much remains bound in tradition.

Two Sisters of the Holy Cross founded Saint Mary’s Catholic School in 1869 as a free school for all parish children. The school began as two classrooms in St. Mary’s Hall, a building on the corner of

Royal and Wolfe streets that is now a parking lot, according to the school’s website.

Boys and girls were divided in separate classrooms. Pot-bellied stoves were the only source of heat. Without a playground, Royal Street was closed to traffic – horses in those days – during recess so that children had a place to play.

In 1870, the school had 40 students. Enrollment grew year after year until sixth and seventh graders had to be relocated to spillover classrooms in the Lyceum on Duke Street. With enrollment up to more than 500 students by 1950, a new 12-classroom school was built at 400 Green St.

The school has undergone various renovations since the ‘50s, from adding a west wing and gym to converting the convent into a junior high. It also underwent a name change when the church became a basilica in 2018.

Now a pre-k through eighth grade school serving 719 students, the Basilica School of Saint Mary continues to operate by the Catholic teachings and traditions on which it was built, according to several alumni.

“It’s certainly strengthened by a great church community,” Alumnus Nick Carosi IV said. “Saint Mary is the oldest Catholic church in Virginia and has a great vibrant and engaged parishioner base, and that flows directly into the school.”

“We’ve had a long run of McGuinnesses at … St. Mary,” Martin McGuinness, a 1985 graduate who attended St. Mary alongside his three siblings, said. “It’s been a real good experience and an important foundational part of my childhood in terms of the foundation of education but also the real lasting friendships. … [I] didn’t even think twice when it came to figuring out where to send my own kids to school.”

As both an alumnus and a parent, McGuiness said it’s nostalgic watching his kids experience some of the same things he did at the school, from the All Saints Parade to annual Christmas concerts.

“It’s nice experiencing [traditions] all over again as a parent,” McGuinness said. “As you get older, the memories become more vivid. Going through first communion, going through confirmation, eighth grade graduation, what an exciting time that was, are all some of the really fond memories that I certainly have and treasure.”

Another alumna, Mary Davis, didn’t say goodbye to St. Mary after her eighth grade graduation. While the school was led and taught entirely by Sisters of the Holy Cross for almost a century, it began hiring lay teachers, nonordained Catholics, in 1954. Davis was the school’s first lay principal.

“It was very unusual to be in charge of the sisters that taught me,” Davis said.

Sister Cypriana, one of St. Mary’s most well-known and long-tenured nuns, was still teaching first grade when Davis became principal.

“One day, I was the principal and Sister was still teaching first grade, and I said, ‘Sister, did you ever think when you taught me in first grade that I’d be the principal of the school one day?’” Davis said. “And she was a little teeny Irish sister. She just threw her little body up and she said to me with her finger out, ‘You just remember, Mary Francis, I made you what you are today.’”

Several said it was the tight-knit St. Mary community that has driven the school’s longevity.

“I think it serves as a catalyst to bring folks together,” McGuinness said. “The closest friends that we have and most of what we do socially are really friends we’ve made and developed from our kids going to school together and going into doing sports together and that sort of thing.” 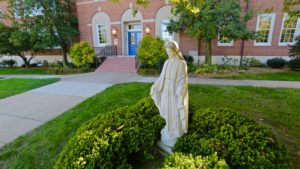 “A lot of our alumni graduate and spread out across the country,” Carosi, who is also chair of the alumni association, said. “I think it will be helpful long term to keep the alumni engaged with what we have going on and progress we’re making.”

The alumni association is hosting various events this weekend to celebrate the school’s 150th anniversary. The weekend of events kicks off with an alumni happy hour at Hummingbird on Friday.

On Saturday, there will be a birthday picnic on the school blacktop from noon to 3 p.m. During the event, members of the community will be able to record a brief video in which they talk about the school or share a memory.

On Saturday evening, the alumni association is hosting “The Big Spaghetti,” an adults-only spaghetti dinner with a reception and entertainment. The tradition dates back to the ‘50s, when then cook Mrs. Hamilton held a spaghetti dinner fundraiser to raise money for the new school, according to the event invitation.

The anniversary weekend festivities conclude on Sunday with a commemorative mass and alumni breakfast.

This weekend also marks the official launch of the Mary Lead Us Campaign, an expansion and renovation project that is expected to begin next summer.

“The base building of the school has not been updated in … years, and it’s about time we all gave back and try to transform that school into a more modern and workable school for this generation,” Carosi said.

As the St. Mary community celebrates its past and looks to the future, the school remains an Alexandria institution.

“It’s just a big part of the culture and the charm of Old Town,” McGuinness said. “Seeing the tradition continue of the kids marching in silence from the school to the church for mass and back – all of a sudden you get caught with a street closure because a bunch of elementary schools are walking to mass – it kind of calms you down and puts things in perspective.”

Davis said the school’s success boils down to one thing:

“What is the key to success?” Davis asked. “It’s a three-letter word: G-O-D. It is God-centered and as long as it stays that way, it will stay a unique school.”