The specific designs for two new waterfront restaurants have come into focus since preliminary plans were approved in March.

The restaurants are a bit off the beaten path from the King Street dining scene. Both are located at the former Robinson Terminal South site as part of the new Robinson Landing development. One of the restaurants is based in a historic warehouse at 10 Duke St. and the other on a pier on the Potomac River. 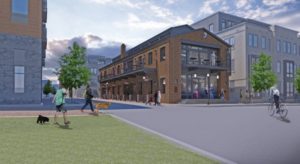 When the special use permits for the dining concepts first went before council in March, the proposal had alluded that all restaurants would be developed and operated by Alexandria Restaurant Partners, the group behind several Alexandria restaurants, including Vola’s Dockside Grill, Mia’s Italian Kitchen and The Majestic.

ARP still plans to open the pier restaurant, as well as a smaller café restaurant on shore that will also serve as the prep kitchen for the pier. The 10 Duke St. restaurant, however, will be run by Murray Bonitt of Bonitt Builders, the company announced this summer.

There has been some confusion in the public about the number of seats at the restaurants as well as the accompanying parking requirements. When the initial DSUP for Robinson Landing was approved in 2015, a 251-seat restaurant was included, with 58 required parking spaces, which was a 29-space reduction from parking standards at that time.

When ARP went before council in March 2019, they altered the project and made it three restaurants instead of one, totaling 563 seats instead of 251. But because city council had reduced the amount of parking required for development projects early last year, the original 58-space parking allotment now exceeds parking requirements for the proposed restaurants.

All three restaurants will have shared valet parking for the 58 spaces. ARP Attorney Jonathan Rak said at a planning commission meeting in March that ARP will provide additional parking if upon opening they find the 58 spaces are not adequate.

Bonitt, who is opening the 239-seat restaurant at 10 Duke St., is an Alexandria-based custom builder who has completed various historic preservation projects throughout the city, including the renovation of the warehouse at 106 S. Union St. – former home to Olsson’s Books and Records – that is now Virtue Feed & Grain.

Bonitt’s new restaurant will be called The Mill, a nod to Pioneer Mills, the flour mill whose foundations were recently uncovered at the Robinson Landing site.

The building is one of the last historic warehouses on the waterfront, according to Bonitt. It has served as a cooper’s shop, which made wooden barrels for the Alexandria Flour Company, and a mess hall during the civil war.

Bonitt plans to pay tribute to the building’s history with the restaurant’s design, atmosphere and menu.

The main cuisine will be southern comfort food, with dishes including crab cake sandwiches, fried green tomatoes, gumbo and oyster po’ boys, according to the restaurant’s special use permit application. The restaurant will also feature a market with grab-and-go and takeout items.

The décor will feature industrial, repurposed furniture throughout the building, as well as a historic narrative of the space along the side of the building, Bonitt said.

“I’ve been renovating buildings in Alexandria for over 35 years and I can’t remember a building I’ve been more excited about,” Bonitt said.

Things are moving along for the ARP pier restaurant as well. An application for a certificate of appropriateness went before the Board of Architectural Review Wednesday evening after the Times’ press deadline.

Prior to the meeting, ARP released renderings detailing the restaurant design, which will feature covered and uncovered seating, rope lights and a kitchen and bar constructed of shipping containers.

Scott Shaw, partner with ARP, said the restaurant will be called Barca, which is Spanish for small boat. Shaw said he plans for the cuisine at Barca to be based around Mediterranean small plates, but the restaurant is still in its early stages.

“I’m off to Spain the first week in December to kind of go do some research,” Shaw said.

Barca will have seating for 232 people. Design and menu plans for the other ARP restaurant at Robinson Landing, which is approved to have 64 seats, have not been released.