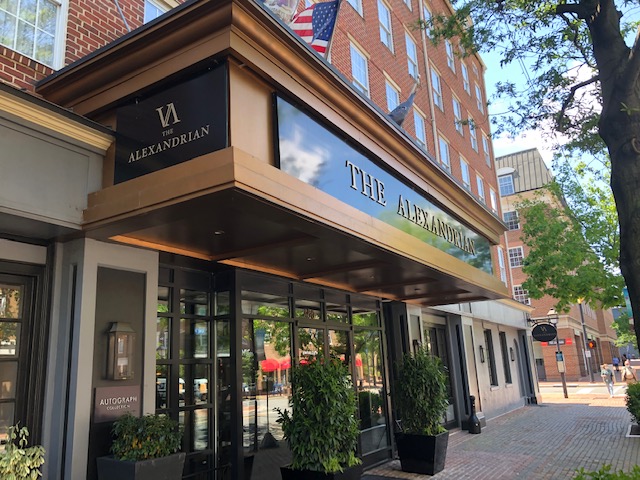 “It was kind of a shock,” Darline Buchanan, who works at a local fitness center, said of the moment she learned she had been furloughed.

Employees across the country – from waiters in its many restaurants to fitness instructors like Buchanan – have experienced the shock of losing their jobs due to the COVID-19 pandemic and the resulting closure of nonessential businesses. As of May 7, 33.5 million people across the country had filed initial unemployment claims.

As of the Times’ print deadline, Alexandria residents had filed 10,609 initial unemployment claims, according to the Virginia Employment Commission. Initial claims began pouring in throughout mid-March, climbing from 33 the week of March 14 to 797 the week of March 21.

The city’s number of initial unemployment claims hit a peak the week of April 4 – 2,578 claims – before decreasing incrementally, as residents received their unemployment benefits on a continued basis.

Regionally, in March there were a total of 110,690 unemployment claims across Northern Virginia, accounting for 7.89 percent of the total workforce in the region, according to a NOVA Community College study.

“It’s absolutely heartbreaking. You know in every one of those … [cases] there is usually two or three other lives impacted, families,” Mayor Justin Wilson said. “And so, the broader impact and misery that is created as a result of this is staggering.”

Although some industries, such as hospitality, food service and fitness, have been impacted more than others, the economic impact of the virus has spared few.

Buchanan was furloughed on April 1, and since then, she has been offering virtual fitness sessions free of charge via Facebook Live. Her only income is through the unemployment benefits she now receives.

All told, Buchanan is making about as much as she would be normally, factoring in fewer trips to the gas station and other expense reductions due to the stay-at-home order, she said.

But Buchanan would still much rather be at the gym, working a full shift, contrary to what many critics of unemployment benefits are arguing, Buchanan said.

“If the gyms were allowed to open on the 15th, I will not be hanging out waiting to say, ‘Well, you know I’m getting the same amount of money. I might as well just sit at home.’ No, I want to get back to work,” Buchanan said.

Buchanan said she is aware that, in many ways, she’s one of the lucky ones. She is single, her children are adults and can care for themselves and she is successfully receiving unemployment benefits. Other furloughed workers, such as Buchanan’s daughter, she said, have only received a portion of their benefits payment.

Others, particularly the city’s Hispanic workers and those who are recent immi- grants, are afraid to even apply for unemployment.

“I have employees who are permanent workers. They have visas and green cards, and they are so afraid to go get unemployment because they’re afraid the government is going to come and get them,” Elizabeth Myllenbeck, chief executive officer of Sonoma Cellar, said. “… For me, I’m aware as a white person that that’s an issue, but that fear is real. It’s absolutely deep and real, and they live in that fear every day.”

For those who suddenly found themselves out of work, there were a lot of questions and very few answers. Many were able to find their way to the Virginia Employment Commission, but many more looked for help at the local level.

“On the one hand, [the pandemic] significantly increased the demand for services because, from the job seekers side, while we are not [the Virginia Employment Commission], people who are trying to file for unemployment have been coming to us, calling us, walking to the office,” Daniel Mekibib, director of the Alexandria Workforce Development Center, said.

Within the past few weeks, the center has received between 800 and 900 calls, about 60 to 70 calls per day, from people looking for help in applying for unemployment, Mekibib said.

The WDC generally refers those questions to the VEC, but the sheer number of calls reveals a deeper lack of awareness – and lack of communication – of the options for the city’s host of furloughed workers.

“Part of the challenge here is that residents and businesses don’t completely understand all of the things that are available for them,” Wilson said.

The WDC sends a list of new job openings to its listserv and has a comprehensive list of new opportunities on its website. The center hosted a virtual job fair on Wednesday where job seekers could meet employers in the area via private video chat sessions and is consistently offering online lessons to help in the remote job interview process.

After applying for and receiving unemployment benefits, the next question is, “What now?” The center encourages furloughed residents to think outside the box when they start their job search, especially if they’ve been in one field for a long time.

“If someone has never thought of a different occupation but all they have been doing is this one, we want them to think they have a lot to offer,” Mekibib said. “Even if they don’t have direct experience in other industries, some of their skills are transferrable.”

For furloughed workers, like Buchanan, who have been frustrated and disappointed by the level and quality of information coming from the federal government, “What now?” is less of a question and more of an accusation. Without information, the uncertainty created by unemployment and a nebulous timeline breeds fear.

“Information is key. Information is what reduces fear, and when you don’t have information … then you start to set in with a little bit of paranoia,” Buchanan said.

The spike in unemployment has impacted businesses as well. Many businesses, even those that have stayed open, have had to furlough most, if not all, of their staff.

“The impact of the pandemic on the hospitality industry has been truly devastating and, while we are open and operating, many of our associates have been placed on furlough as a result,” Mike Nelson, general manager of Old Town hotel The Alexandrian, said.

The federal paycheck protection program has provided some relief for business owners and their employees.

Myllenbeck was unable to get a PPP during the first phase of applications. A lot of small businesses did not receive funding in the first round of PPP loans especially businesses owned and operated by minority or immigrant residents who did not have established banking relationships, Wilson said.

City staff are trying to reach out to those businesses and make them aware of how they can gain access to the second round of PPP funding.

Since then, Myllenbeck has received PPP funds, allowing her to steadily re-staff Sonoma Cellar, she said. In the interim, she turned to creative solutions to support her employees, including an 18-year-old part-time employee who also plays music at the restaurant and is the primary breadwinner for his family.

In order to support him, Myllenbeck organized a concert, allowing the young musician to perform live on Instagram and receive tips.

“It was really lovely to see the support for him because we’re trying to get this boy to Berklee [College of Music] – he’s that good – and he needs the support,” Myllenbeck said.

The COVID-19 pandemic has been a period of fear and uncertainty, made only worse for millions of Americans by the sudden blow to their finances, families and ways of life. As businesses outside of Northern Virginia prepare for the first phase of Gov. Ralph Northam’s reopening of the state on Friday, Mekibib’s advice for the job interview process takes on new meaning.

“I would encourage [people], first thing, to not be discouraged, to be hopeful and to appreciate what they have,” Mekibib said.