It started with a headache and a little bit of a sore throat. It was late March and Silsa Ortiz de Catalan thought her allergies were kicking in.

Three days later, on March 28, de Catalan started feeling worse. Her headache and sore throat persisted, and now she had the chills. Two days later, she had a fever. By the time de Catalan tested positive for COVID-19 on April 8, her two children were starting to show the same symptoms.

“We were all having the same symptoms, and we were all positive,” de Catalan said through a translator. “I was really frustrated and sad, and it was frightening. And our symptoms just kept on getting worse and worse throughout the process. I was really concerned because one of my children has asthma and all three of us were positive.”

De Catalan’s story is one of many in the Chirilagua neighborhood that, unfortunately, share the same symptoms: illness, job loss, economic anxiety.

A largely low-income, Hispanic neighborhood, Chirilagua, a nickname for Arlandria, has experienced community spread of the virus on a greater level than most other neighborhoods in the city and areas of the state.

Ethnicity and zip code data released by the Virginia Department of Health paint a bleak picture for some of the city’s most vulnerable populations, including the Hispanic and Latino residents of Chirilagua. 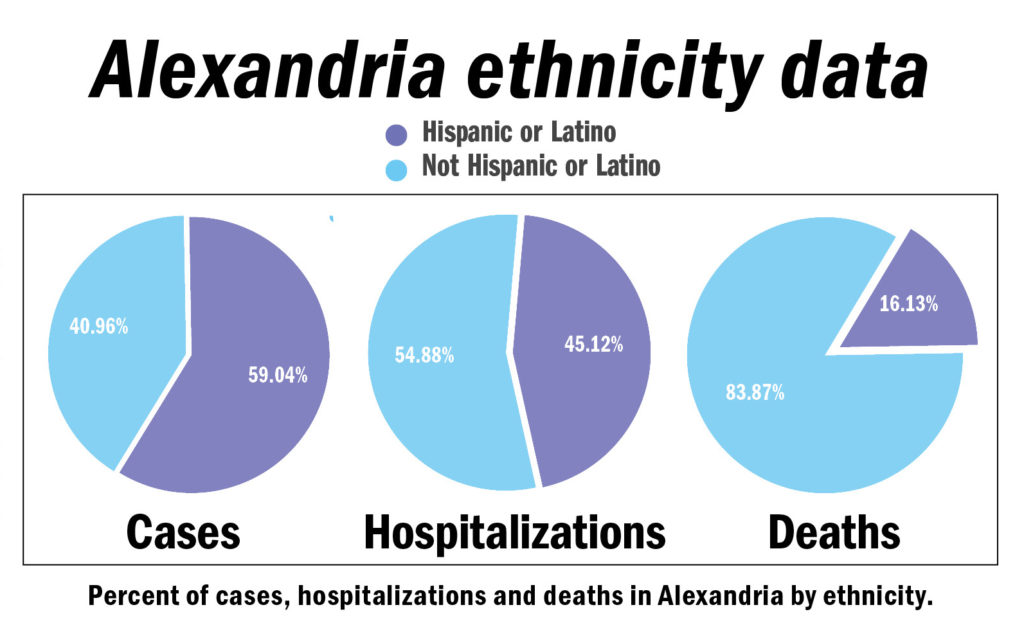 The two zip codes entirely within the City of Alexandria with the highest positive test rates are 22305 and 22304, which have the highest populations of Hispanic and Latino residents in the city.

Hispanic or Latino residents make up about 36.4 percent of the 22305 zip code, which includes Arlandria/Chirilagua and the northern part of Potomac Yard, according to zip-codes.com. Almost half of the 922 people tested in this zip code, 47.3 percent, tested positive for COVID-19 as of May 19, according to VDH zip code data.

While Chirilagua’s numbers are not representative of the city’s entire Hispanic or Latino population, nor the zip code’s entire resident population, the data paints a disastrous picture for a community that was already on the receiving end of inequitable policies, Ingris Moran, lead organizer for Tenants and Workers United, said.

“… It was no surprise to us because we know that those communities, such as ours, there are immigrants that are uninsured, there’s the [community] members that don’t have access to quality and affordable healthcare,” Moran said.

In Chirilagua, the virus has exacerbated many of the underlying anxieties that Hispanic and low-income residents were already feeling and revealed socioeconomic problems that existed well before the pandemic.

“Ultimately, the reasons that these patients are at greater risk are because of underlying economic issues,” Dr. Basim Khan, executive director of Neighborhood Health, said. “They live in crowded conditions because of the cost of living in Northern Virginia. A lot of times they work low-income jobs that reduces their economic security and means it’s more difficult for them to take time off work or they don’t get paid leave. They have to rely on public transport.”

Chirilagua residents like de Catalan, who worked as a cleaner, were given the nearly impossible choice between employment and economic security or health and safety.

When de Catalan first started experiencing her symptoms, she told her boss that she would need to self-isolate at home. Her symptoms – and her childrens’ symptoms – got worse, to the point that she started to imagine a parent’s worst nightmare.

“We were all throwing up. This had never happened before. I have two children, one is 16 and one is 19, and I was thinking, ‘If something happens to me, what will happen to them?’” de Catalan said.

After she tested positive, de Catalan’s employer gave her two weeks of leave and told that she would have to come back after those two weeks or else she would lose her job. The doctors told de Catalan that she would need at least 40 days to fully recover. She heeded their advice and decided she was better served staying home to recover.

“Many of these families don’t have an additional source of any kind of income, whether it is being able to apply for unemployment or a stimulus check,” Schellhaas said.

For residents that work as cleaners, construction workers and grocery store clerks, stepping out the door and going to work is a risk.

Although Hispanic and Latino residents account for a disproportionately high number of Alexandria’s cases, the working age of many Chirilagua residents may account for that ethnic group’s relatively low hospitalization and death rates.

“What’s different in our community … is there’s not a huge elderly population in Chirilagua,” Schellhaas said. “There’s a lot of young adults, a lot of children, but I don’t see a lot of older people in the community.”

The contrast between the death rates by ethnicity in both Alexandria and Virginia is even more stark, as non-Hispanic or Latinos are dying at around 7.5 times the rate of Hispanic or Latino residents.

The situation is perilous for those who were already on the margins, but community organizations have been stepping up to help those living in Chirilagua.

Casa Chirilagua created a special fund to pay bills and rent on behalf of families in the community, which provides “a band aid solution,” Schellhaas said. Donations can made by going to Casa Chirilagua’s website: http://casachirilagua.org/helping-during-covid-19.

In lieu of monetary donations, Casa Chirilagua has also become an unofficial food pantry, with a roomful of food and supplies at its Mount Vernon Avenue headquarters.

At Neighborhood Health, Khan has witnessed the scope of the virus’ spread firsthand and said that its own testing efforts have revealed a similar disproportionate impact on the city’s low-income and Hispanic populations.

Neighborhood Health serves 30,000 patients – around 90 percent of whom are Hispanic, according to Khan – and has provided free COVID-19 tests to 1,400 people. More than 50 percent of those tests have come back positive, Khan said.

Working with community partners – Casa Chirilagua, Community Lodgings and Tenants and Workers United – and with support from the city, Neighborhood Health identified people in the community and scheduled 300 testing appointments for Saturday. The aim was to open up testing to anyone and everyone in Chirilagua, including those who may be asymptomatic carriers of the virus.

“Up to half of transmission happens from asymptomatic people, so it’s important to identify those people so they can isolate, otherwise, they’re spreading it to more people,” Khan said.

By the end of Saturday, Neighborhood Health had collected 236 test samples and, along with the Alexandria Health Department, will provide guidance to those that test positive. Khan said he hopes this is only the first in a series of expanded community testing efforts.

“We want to ensure there’s more testing, not equal, more testing in low-income communities because the burden of the disease is much greater there and that’s one way you get control of it,” Khan said.

The city and AHD have also pitched in to address the needs of the Chirilagua community.

The city has also made rooms at local hotels available for residents who test positive and cannot effectively self-isolate at home, although only a couple of Neighborhood Health patients have taken advantage of the opportunity.

Support is coming to Chirilagua slowly but surely. To varying degrees, the city, health department and community organizations have all come to the aid of residents in this often-ignored sliver of Alexandria. Although the virus has disrupted and destroyed lives that, in some cases, were already on the brink, it hasn’t destroyed the one thing that’s helped residents through good times and bad: their faith, in both God and one another.

“It’s a pandemic. We have to hold each other by the hand. It’s good to look for help, it’s good to have help where you can find it so we can all survive this and get through it together,” de Catalan said.