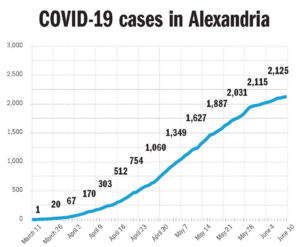 Certain recreation and entertainment facilities, including museums and outdoor sports courts, may open with restrictions. Regulations for houses of worship, non-essential retail businesses and salons, which were permitted to open under phase one, remain the same. Overnight summer camps, most indoor entertainment venues and large amusement operations such as fairs and carnivals will remain closed in phase two.

Alexandria’s Department of Recreation, Parks and Cultural Activities will begin reopening outdoor amenities, including parks, trails, fields, dog parks and most sports courts, in phase two, according to a news release. These outdoor amenities are expected to be fully reopened by June 15, according to the release. In addition, the Torpedo Factory Art Center will reopen to the public tomorrow.

Swimming pools are permitted to open for exercise, diving and swim instruction under phase two. However, the City of Alexandria has not announced plans to open public pools.

Under phase two, all businesses and organizations must continue to adhere to physical distancing guidelines and increased sanitation practices.

As of June 11, Alexandria has had 2,127 COVID-19 cases since March 11, with 218 hospitalizations and 48 deaths, according to the Virginia Department of Health. There have been three new deaths reported in the past seven days. The percent of positive tests in Alexandria continues to decrease.

On June 7, the city released data from recent testing efforts, including testing at long-term care facilities and the community testing event held on Memorial Day.

The Alexandria Health Department has facilitated point prevalence surveys at eight Alexandria long-term care facilities, as many of these facilities are home to at-risk populations and have experienced outbreaks of COVID-19. One facility declined the survey, and AHD has not reported the results of the surveys that were conducted. Of the 47 COVID-19 fatalities in Alexandria, 36 have been residents age 70 and older.

On Memorial Day, the city offered free testing for up to 3,000 people at temporary testing sites set up at Landmark Mall and Cora Kelly School for Math, Science and Technology. Of the 2,953 people who were tested for COVID-19 between the two sites, 236 received positive results.

The AHD reported that the testing event had been “immensely resource-intensive and resource-diverging,” requiring more than 400 hours in planning and preparation.