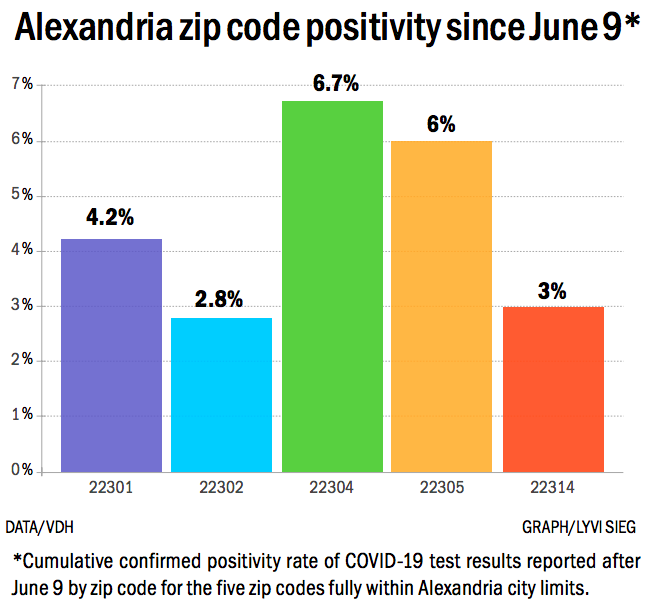 Alexandria’s cumulative COVID-19 positivity rate has declined in each of the five zip codes that lie fully within city limits since data was first released on May 7. 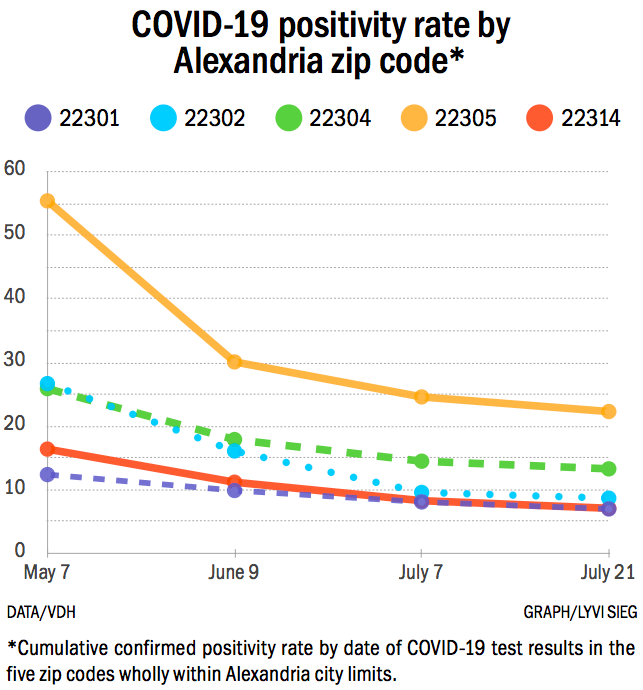 That total starkly contrasts with the combined 8.5% positivity rate on confirmed cases of COVID-19 per test within those five zip codes since May 7.

The decline is even more pronounced since June 9, when the second detailed batch of zip code data was released by the VDH. The combined positivity rate of those Alexandria zip codes for test results received in the past six weeks totals 4.6%.

Despite the slight increase, Alexandria’s two-week aggregate positivity rate is considerably lower than the Commonwealth of Virginia’s seven-day moving average rate of 7.7% positive tests as of July 17.

One reason for the state’s higher positivity rate is that it includes both confirmed and probable cases, while the zip code data provided by VDH lists confirmed cases only. The VDH website defines probable cases as ones that are “symptomatic with a known exposure to COVID-19” but that lack a positive test result.

The extremely high early positivity rate can be partially explained by the fact that because tests were scarce until early May, only the sickest people were receiving COVID-19 tests early in the pandemic. By May 1, more than 100 test results per day consistently began to be received in Alexandria, according to data on the VDH website. This led to more widespread testing, including testing of asymptomatic people, which helped lower the positivity rate.

A likely explanation for this initial surge and subsequent plunge in positivity within zip code 22302 is that three of Alexandria’s long-term care facilities are located within this zip code, and all three had early and significant outbreaks of COVID-19 that have since subsided. The outbreaks in all three facilities are pending closure, which according to the VDH website means that no new cases have been reported within those facilities in the last 28 days.

A concerted effort has been made to conduct testing in all three of these zip codes.

The Virginia National Guard partnered with the VDH to conduct testing in all LTCFs that wanted it, and, according to City Spokesperson Craig Fifer, all but one LTCF in Alexandria received this point prevalence testing. This means extensive testing has been conducted at least once in either two or all three of the LTCFs in zip code 22302. Participating LTCFs were not identified by name.

In addition, VDH and the City of Alexandria partnered with Neighborhood Health, which provides health services in low-income communities, to hold several free testing clinics in zip codes 22305 and 22304, which partially explains their higher rate of testing.