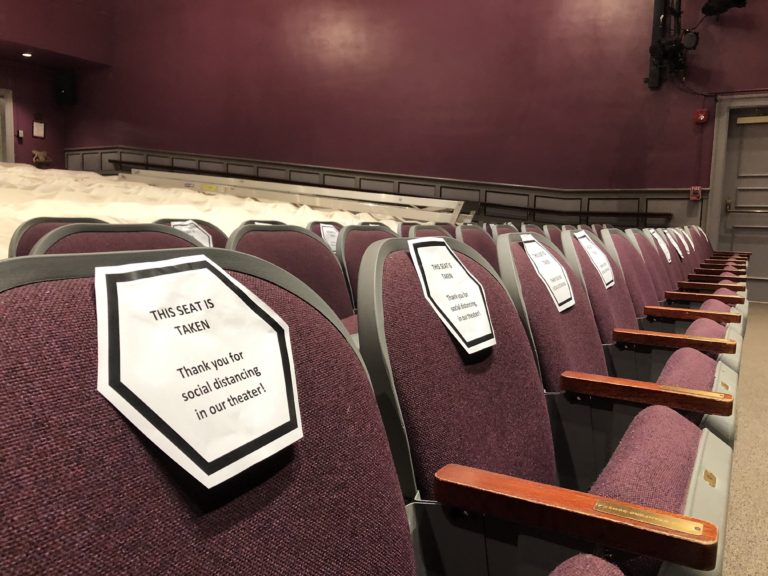 For the first time since Gov. Ralph Northam (D-VA) issued a stay at home order on March 30, local theaters and live entertainment venues are now able to reopen as part of phase three of the state’s reopening plan.

In phase three, which started on Wednesday, entertainment venues can reopen but must limit capacity to 50 percent and maintain 10 feet between families or units of attendees. It’s an opportunity theater and concert hall owners have been looking forward to for months, but it brings uncertainty and anxiety for owners and audiences alike.

What will the live performance experience look like now and moving forward? Will audiences be willing to return? The answers are still being determined, as local entertainment venues and the city’s creatives grapple with the realities of performing in the middle of a pandemic.

Some live performance venues are ramping up operations and jumping at the opportunity to entertain audiences for the first time in months.

The Birchmere is opening on July 10 with a performance from the Billy Price Charm City Rhythm Band. Certain things will remain the same at the local mainstay, such as free parking and merchandise sales.

However, the concert will be a different kind of experience than fans of the venue are used to. There will be a $5 COVID fee, according to a Birchmere newsletter. In addition to the state-mandated limited capacity and 10 feet of space between tables, patrons will be required to wear face coverings when they’re not seated.

Doors will open at 6 p.m., at which point ticket holders will be escorted immediately to their seats, and the show will last from 7:30 to 9 p.m. with one act and no openers, according to the newsletter.

Other live performance venues are taking a more cautious approach to the re- opening.

The Little Theatre of Alexandria scrapped the remainder of its 2020 season and replaced it with a series of three smaller shows in the fall called Small Theatre for Uncertain Times.

“Even though we’re at a phase right now where we could perhaps do a little bit more, I don’t think anyone’s comfortable being there yet,” LTA President Russell Wyland said. “… If we’re looking ahead to a time when we will actually be permitted to have full audiences or fuller audiences again, what are we going to have to do to make sure people actually feel safe coming back? What we want to do is offer really small shows.”

On a practical level, that means small casts, small audiences and a lot of cleaning and sanitizing. The three shows – “Love Letters,” “Mixed Doubles” and “Belle of Amherst” – will all be free and involve one or two-person casts, making virtual rehearsals and social distancing on stage more feasible.

The plays were specifically chosen to be one-act so that there are no intermissions where audiences could potentially spread the virus by packing into the bathroom or milling around in the lobby, Wyland said.

The LTA’s 219-capacity theater will be limited to audiences of between 40 and 50 people, specific seats and rows will be blocked off and the performance schedule has been altered to help protect the health and safety of audiences.

“Where we would normally run a show Tuesday through Sunday, we are running shows so that we have a day off in between each performance so that we can fully sanitize the auditorium,” Wyland said.

But even if LTA provides a safe, sanitary environment for its small-scale productions, it’s not a guarantee that audiences will feel comfortable returning to the theater.

A survey conducted by Shugoll Research found that dedicated theater goers, most of whom are older adults and, thus, are more vulnerable to COVID-19, are more hesitant about coming back.

LTA held its annual meeting for members last week via a Zoom conference call. In previous years, around 80 people usually attend; this year, 138 people participated in the virtual meeting.

For the first few shows, Wyland said LTA is prioritizing its subscribers and members, although the shows remain open to general audiences as well.

“Everything that we’ve learned from our colleagues around the country working in theater is that right now the main thing is trying to hold on to your core audience because your core audience is what you’re going to need when things turn back to normal or something resembling normal,” Wyland said.

Subscribers have already started returning in anticipation of the abbreviated four-show season that begins with “Mamma Mia!” in January 2021.

“I think it shows a great deal of confidence that we will get back on track and a commitment to us as a theater, that they’re willing to give us this pass until things are back to normal, whenever that may be,” Rachel Alberts, a producer for LTA, said.

MetroStage, which is currently in between sites, found itself in an unusual situation when the pandemic hit. The theater was not producing any shows but was starting to raise money for its new venue, which will be located on North Fairfax Street and is not due to be complete for at least 18 months.

“We also are in an awkward situation where in a few years we’ll be opening, and, in the meantime, I’ve got to raise money for building a new theater and the economy is collapsed and everything is collapsed,” Carolyn Griffin, producing artistic director at MetroStage, said.

Griffin will not be able to put on performances at MetroStage’s own theater for another few years at least, but she’s starting to look into organizing shows at other venues. The challenges involved with putting on shows at the moment are significant and potentially devastating for the industry as a whole, Griffin said.

“After being shut down all together and being in such financial issues and then to only perform for a limited number of people, it becomes a budgetary nightmare and very much a concern for the industry,” Griffin said.

In lieu of in-person live performances, theater companies across the country and world have turned to live streaming and other creative online solutions to keep audiences engaged, but even those pose a challenge. The rules around con- tracts for members of the Actors’ Equity Association, the theater actors’ union, are different for filmed content or video, which makes the shift to live streaming a logistical minefield.

“Will the contracts shift in substance so that we can perform in different ways and under different conditions and still be a viable industry or will they not? That’s a very big question right now,” Griffin said.

For James Ross, music director for the Alexandria Symphony Orchestra, the disruption caused by the pandemic was an unfortunate but necessary opportunity to rethink a stagnant tradition of performance.

On May 7, the ASO began putting on small chamber music performances for socially distanced audiences in senior living facilities such as Goodwin House and outdoor venues such as the Secret Garden at the Rectory.

The shift from a 100-person orchestra packed on a stage to a small team of musicians spread six feet apart was an adjustment, but one that Ross has been supportive of for a while, he said.

“It has been my contention for a long time that the most successful modern classical music institutions need to be more modular,” Ross said. “They need to be able to respond to the musical needs of the community, even if it’s not in the form of 80 to 100 people sitting on a big stage and 1,000 people in the audience. … For me, it’s a good thing that our orchestra and orchestras in general are being forced to rethink what their product is and what they actually represent.”

Whether the ASO will perform its upcoming sea- son at its usual venues – Rachel M. Schlesinger Concert Hall and the George Washington Masonic Memorial – is still uncertain. The symphony will continue with its small chamber music performances and has plans for the fall season.

Ross, like many live performance organizers, is set on making sure live performance has a future in the city, even if it looks entirely different. His performance for a small audience of elderly Alexandrians at Goodwin House was a reminder that live performance is a vital form of connection at an uncertain time defined by isolation, Ross said.

“The sensation felt so connective, so confirming that live music making in front of live, breathing human beings who are sharing the same space with you, even if it’s in a garden, a courtyard, was just something that feels vastly different than even the best virtual productions that everybody was doing in the last three months or so,” Ross said. “… It was beautiful.”