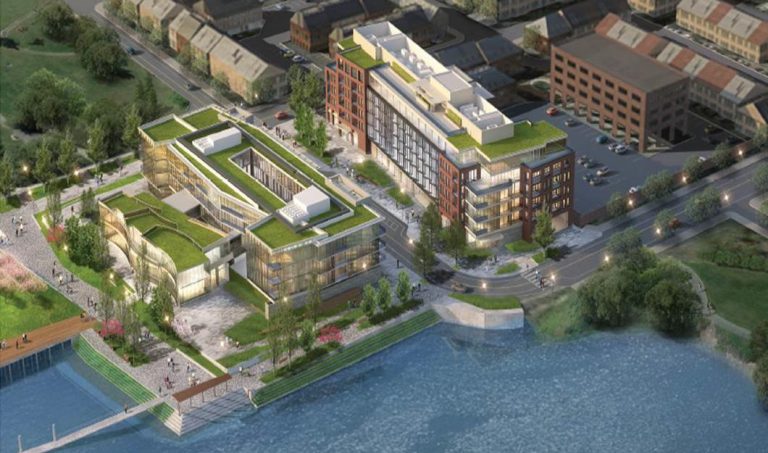 At the foot of Oronoco Street along the Potomac River, wedged between Founders Park and Oronoco Bay Park, is West’s Point Park. Despite its size, less than a tenth of an acre, there are always visitors that come to the short cement wall overlooking the Potomac to sit and enjoy a snack.

Recently, there has been more activity around West’s Point Park than usual. Colorful posters along Union Street as well as Oronoco Street have indicated that the site of Robinson Terminal North would become part of Alex Renew, a series of projects that consist of a new tunnel system that will provide upgrades to Alexandria’s wastewater treatment capability.

In early November, heavy machinery from ACECO Demolition arrived on the scene. Included was an excavator weighing about 40 tons that was no stranger to the demolition process. It was this type of machinery that was engaged in the 2017-2018 demolition of the Robinson Terminal South. We know the site to-day as Robinson Landing, a beautiful housing complex along the Potomac.

RTN was part of the Robinson Company that was founded in 1939. The chief client of the firm was the Washington Post. Eventually, the Post purchased RTN and used it as a warehouse for its newsprint. The rail line that remains and can be seen in Oronoco Bay Park most likely brought rolls of newsprint across Pendleton Street to the warehouse.

Some 70 years later in 2013, the Post sold the facility to prospective developers. With no definitive plan for development of the property in hand, the City of Alexandria decided to use the site for the Alex Renew project described above and which, by 2019, was under way in other parts of the city. This meant RTN had to be taken down.

Fast forward to mid-November 2020. The Liebherr excavator, model no. 936, described above had moved into place. With its hydraulically operated boom and attached shear-action cutter, the excavator was ready for action. The RTN facility consist- ed of three sections or bays, each about 150 feet long, running parallel to Union Street. The first bay to be taken down was the one closest to Union Street.

AceCO’s approach was straightforward – move no. 936 into position, raise the giant boom with its large, hardened steel cutter and move from north to south taking down the bay’s structural components. Cross bars, beams and thin metal sheets were no match for the hydraulically powered cutter.

To clear a path for no. 936 to advance along the bay’s concrete floor, the boom was used to push aside what was now scrap. As the scrap began to build, another Liebherr excavator, model no. 926, was brought in. With its scooping action, no. 926 assembled the scrap in piles while no. 936 continued to bring down the structural components. With this approach, all three RTN bays were taken down in about eight working days.

With the structure down, the whole concrete slab floor that once contained active RTN bays was now filled with piles of scrap. Next, trucks were brought in to haul away the scrap. But before that could happen, the scrap had to be separated by material type, size and shape. A small front-end loader was brought in to assist. The two excavators and the front-end loader moved methodically around the slab floor to rearrange the piles and accomplish the separation.

The three pieces of machinery then worked in tandem to haul away the scrap. Most of the large steel crossbars and beams were loaded into open-top tractor-trailers. Dumpsters then replaced the tractor-trailers to remove the remainder of the scrap. All that re- mained was to sweep up the dirt and dust on the floor and the job was done.

By Thanksgiving Day, the Robinson Terminal North was no more. The site is now ready for the Alex Renew project.