For half a century, Alexandrians have flocked to Old Town each December for the Scottish Christmas Walk Parade. This year – a year that should’ve marked the parade’s milestone 50th anniversary – the event has been cancelled.

The Campagna Center, a nonprofit that serves children and families in Alexandria with educational programming and services, cancelled the weekend-long event, which raises more than $250,000 in funding every year. The loss of funding, combined with an increased need for services and added expenses caused by the pandemic, could result in significant financial challenges for the nonprofit in 2021, according to Tammy Mann, chief executive officer of the organization.

“Without being able to rely on the support the [Scottish] Walk Weekend affords us, certainly as we look on the other side of January, we have some serious work to do,” Mann said. “This is a pretty significant loss for the organization.”

When the pandemic hit in March, Mann said she knew the Campagna Center had to pivot quickly to offering its services virtually. The nonprofit serves more than 2,000 children and families every day through its before and after school programs, English language classes, mental health services and other programs.

The organization turned out to be prepared for the transition to virtual services. Prior to the pandemic, the center had invested in the infrastructure necessary for virtual programming. After the lockdown, that infrastructure became even more vital.

The Campagna Center moved its tutoring program and English language classes for adults online and increased its communication with families via text messaging. One of the nonprofit’s early priorities was ensuring that the people served by these services were aware that they still had access, Mann said.

“There was a lot of adjusting that we had to make in the early months to try to not lose touch, to make sure that people were not without access to information if they were struggling,” Mann said.
In some cases, the Campagna Center had to dramatically adjust its offerings.

The center also supported the city’s own grocery gift card program and set up an emergency diaper bank in collaboration with the D.C. Diaper Bank. With parking lot space reserved at First Baptist Church, the Campagna Center was able to provide about 40,000 diapers per month to parents in need.

In July, the nonprofit started to resume its in-person offerings in accordance with statewide guidelines. Offering in-person access to the center’s services was especially important for parents who were essential workers or were otherwise unable to stay at home to assist their children during school, Mann said.

“It was very, very important for us to actually find ways to be able to serve those families, whether they were in our early childhood program [or] our summer camp program that we generally run,” Mann said.

For Bridget Shea Westfall, whose kindergartener attends Matthew Maury Elementary School, the Campagna Center’s services have been invaluable during a challenging time for her family.

Shea Westfall and her husband work for different federal agencies and are considered essential government workers. Shea Westfall’s husband was recalled to work in person in September – just as their son, Jameson, started the school year. Shea Westfall herself has been working overtime, sometimes from 6:30 a.m. to 12:30 a.m., due to the pandemic, meaning she had very little time to help Jameson with his virtual learning.

“It’s very hard because you feel helpless that you can’t work from home,” Shea Westfall said. “I don’t think a lot of people realize that there are parents who don’t have a job where they can work from home or the nature of your job is such that you can’t give your son or your child adequate attention. This year, the Campagna Center has just been really important to us.”

Prior to the pandemic, Shea Westfall had been a volunteer at the Campagna Center, even serving on the board for the Junior Friends of the Campagna Center. When her son began school at Matthew Maury, she started using Campagna Kids, the nonprofit’s licensed after-school program.

Shea Westfall and her husband depended on the program, so when ACPS started to shift to virtual learning in the spring, it was a huge loss.

“There’s an assumption that you’re at home and your parent is helping a younger child, but we don’t have that opportunity,” Shea Westfall said. “He’s been asked to be very independent as a 6 year old, using a tablet when he really hasn’t mastered reading and writing.”

Jameson was one of 100 students who got accepted into the program.

Attending the program at George Mason has made a difference for her son, according to Shea Westfall. He’s made new friends and has come to think of the program’s group leaders as his teachers too. 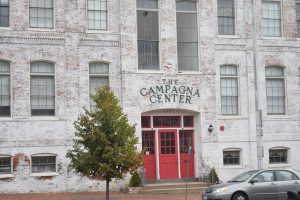 “He told me that he was most thankful for ‘school,’ and we asked what he meant by that,” Shea Westfall said. “We’re like, ‘Oh, do you mean your teacher?’ And he was like, ‘No, I mean Campagna.’”

But shifting back to in-person operations hasn’t been easy – or inexpensive – for the Campagna Center. The cost of testing staff and purchasing personal protective equipment for staff had already created additional financial strain on the non-profit, and that was before the organization cancelled the Scottish Christmas Walk.

Alongside the Scottish Christmas Walk Parade, the Campagna Center’s weekend-long slate of events includes the Taste of Scotland Scotch tasting, holiday homes tour and Heather and Greens wreath sale. The events, which were scheduled for Dec. 4 through 6, are some of the organization’s largest fundraising efforts, which leaves a gaping hole in the Campagna Center’s financial future.

The Scottish Christmas Walk has become an Alexandria tradition, but the cancellation is more than just a loss for those who enjoy the event.

“At the core, [those events] exist to fuel the mission,” Mann said. “When you can’t fuel the mission, it means there are people in our community that are without resources that they need to thrive, to support the development of their children and everything that comes with wanting to be on a path of realizing your potential.”

In lieu of the Scottish Christmas Walk weekend, the Campagna Center will be organizing a holiday distribution on Saturday for families in its early childhood program. Families will get a grocery gift card for the month, a book for their child, a stocking stuffer, pajamas and one toy, according to Mann. Instead of the annual holiday store experience for families, the center will be providing contactless pickup.

“We are going to be busy on the fifth, not with bagpipes ringing but making resources available,” Mann said.

In addition to the programs offered this weekend, the organization will also be running its Wright to Read tutoring program for elementary school students on Dec. 12, as well as a diaper drive. The nonprofit is also preparing a coat drive to provide winter coats to families in need of cold weather clothing for later in December, Mann said. The center also continues to accept monetary donations. Visit www.campagnacenter.org/get-involved/donate for more info.

Although Shea Westfall said she will miss the Scottish Christmas Walk events, she said she is more worried about how the financial loss could impact the Campagna Center and the children and families it supports. Shea Westfall still plans on donating to the organization and believes that, at a time traditionally defined by giving and community, the Campagna Center should be a beacon of light at a dark time.

“We are as strong as we are because there’s an incredible base of support, a caring community, that really wants to see everyone have a shot at being able to get their needs met,” Mann said.