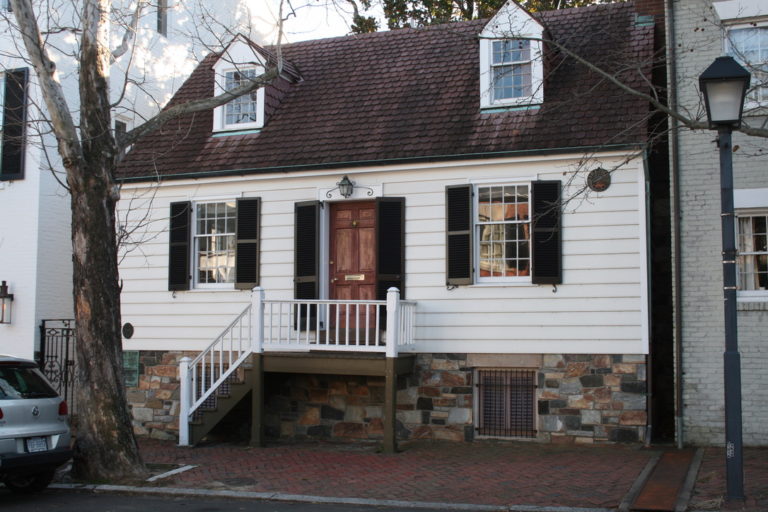 When Tom Byrne’s son was a child, he wrote a letter to the City of Alexandria asking them to restore the name of an alley behind their historic home in Old Town.

The home Byrne and his family lived in was a replica of a prior house on the same lot that was once owned and occupied by George Washington himself. The alley is where Washington would ride his horse to enter his property. Soon after the letter was sent to the City, signs went up, and the alley was restored to its previous name: Washington Way.

“I was thinking to myself, ‘I wonder if they have any idea that these letters requesting that these signs went up were written by an 8 or 9 year-old?’” Byrne said.

The modest house, modeled after the one a young Washington once lived in, is located at 508 Cameron St. in Old Town. The home was built between 1769 and 1771, torn down in 1855 and rebuilt to resemble Washington’s original house in 1960.

Byrne, an intellectual property law consultant, bought the house in 2000, the same year he married his wife. At the time, he was looking for a historic home and he especially wanted to live in Old Town. The family lived in the house for nine years until he and his wife had a third child and decided they had outgrown the house. After his family moved out, he began renting the house to guests in Alexandria.

“I enjoy the history … of it,” Byrne said. “I love being down here in the heart of Old Town, where you can walk to almost everything quite easily.”

When Byrne first moved into the house, he immediately made some changes to make the house more in line with its history. The Byrnes swapped the siding for stone and installed a red roof. Byrne said, in his research he found these were the colors Washington wanted for the house and they are the same colors of Mount Vernon.

“He must have really loved that combination of a red painted roof coupled with stone color siding,” Byrne said.

The house has three floors – a main level with a living room and dining area, two bedrooms and a full bath upstairs and a basement with a kitchen and family room. The basement is comfortably decorated with a sofa, while the middle level is more formal. Byrne said Washington specified in a letter that he wanted a brick floor in his basement.

In the 1760s and 1770s, Washington would stay at the original house when he was in town for business, around when he was a part of the House of Burgesses. Later in life, during the Revolutionary War and when he was President, Washington rented the house to a variety of historical figures, including his wife’s niece, Fanny Bassett Washington. When Washington passed away in 1799, the house was the number one item on his will and he passed it onto his wife, Martha Washington.

Washington originally owned a quarter of the block, from where the house sits on Cameron Street today to Pitt Street. He would enter the house from the back alley by horse and leave his horse at the stable, which is now a shed, Byrne said. There is also a replica of the stable by the shed.

“This is the only house he ever built for himself and designed himself,” Byrne said. “Mount Vernon, of course, he inherited, and then he enlarged. This one, he bought the lot and built a house for himself.”

The house was torn down in 1855 after falling into disrepair. Luckily, a forward-looking neighbor who lived across the street drew a picture of the house before it was torn down. A replica of the picture is in the townhouse, and the original drawing is in the Alexandria

Masonic Temple. This drawing is what the house was modeled after when it was rebuilt in 1960 by Richard Lowe, a former governor of American Samoa and Guam, and his wife.

Later, in the 1990s, Mick Fleetwood of Fleetwood Mac rented the house when he owned Fleetwood’s, a blues club and restaurant in Old Town. In a Washington Post article from the time, Fleetwood simply noted, “It’s actually George Washington’s old house,” and “That’s what the plaque says outside.”

To Byrne, the most interesting piece of the house’s history is a letter Washington wrote to Martha during the Revolutionary War asking her to stay at the house, instead of Mount Vernon, for safety reasons. To him, this shows how Washington felt about the house and that Martha would be safer with Alexandrians.

“It is kind of an interesting thing that he’s feeling that she’s vulnerable right there on the Potomac, so that she might be best if she moved to their house in town,” Byrne said.

city, making it very popular with tourists and visitors, according to Byrne. When walking by the townhouse, a tourist might notice a bust of George Washington in the window, an item a previous owner of the house left, Byrne said. Tourists and neighbors often take pictures of the house while walking around Old Town.

“To live in the house is something because there are tours constantly coming by the house,” Byrne said.

Another unique feature of the house is the backyard, which contains a courtyard, a 100-year-old southern magnolia, a shed that used to be the stable and an alley. Byrne’s kids used to play and ride their bikes in the alley, the same one his son helped rename.

Like the Washington Way story, Byrne has many fond memories of starting his family in this home. He sometimes thinks that George Washington was also sentimental about the Old Town home he once called “my own house” in letters.

“I’m speculating now, but it’s interesting because it certainly is a modest home, but he probably associated it with his younger years and pre-revolution,” Byrne said.