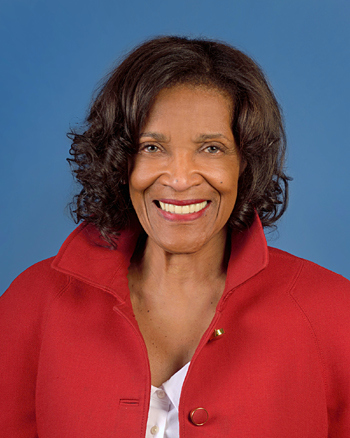 Florence King tells people who ask that she almost had no choice but to run for City Council. As a long-time Alexandrian, King said she sees how the tremendous increase in density in recent years has priced out residents who want to remain in the city. King wants to help the city pivot back to being affordable for both newcomers and those deeply rooted here.

“I am here to serve all of Alexandria. It’s not a fragmented city to me, I feel that the West End is just as important as the waterfront,” King said.

King is the owner of FMK Financial Literacy Center and has lived in Alexandria for 30 years. She is a candidate who is well acquainted with the city and the local elections process, having worked as a city elections officer for 25 years, vice chair of the Alexandria Historical Resources Commission for 15 years and chairwoman of the city’s Commission on Employment.

In 2018, King was selected as a Living Legend of Alexandria and now sits on the nonprofit’s board. She received this award for her years of volunteer work and her FMK Financial Literacy Center seminars. The seminars taught people about balancing checkbooks, time management, and credit cards.

“It must be part of my DNA because I just feel that if I don’t do it, I feel that if nobody else has got to do it, who will do it?” King said. “And so at least I will take a shot at it.”

King is one of two independent candidates running for City Council in the Nov. 2 general election.

She is running as an independent because she wants to pledge herself to issues that align with her principles. While campaigning, King said her independent designation has appealed to both Republican and Democrat voters. Members from both parties, King said, have expressed disappointment and plan to vote across lines.

“I want to get the perspective on both sides and both sides have valid viewpoints which I admire but give me an opportunity to digest those and let me make the decision myself,” King said.

Being independent is not just King’s political affiliation – it is also something she believes Alexandria and its residents should aspire to be. To her, City Council needs to clarify that the City of Alexandria is separate from the part of Fairfax County that is also called Alexandria. King said confusing the two places can cause harm to the city, and that some Fairfax County residents think they live in Alexandria, when in fact they are separate governing jurisdictions.

Other issues important to King are housing affordability, flooding and decreasing the city’s high density.

After her two daughters moved out of the city so they could afford to buy houses, King said she realized that millennials and the middle class, including first responders, can no longer afford to live in Alexandria.

“I want my family here with me and my loved ones because when people get old, those are the ones here to take care of you,” King said.

Many residents have told King they are concerned about being priced out of their homes. Residents who have lived here for 50 years do not believe they would be able to afford their current homes if they moved out, King said.

A possible solution to this issue, according to King, is creating waivers that allow developers and building owners to create lower levels for existing structures. An example King provided was a large house with green space and added an extension that could be leased to a senior or college-aged family member.

King’s perspective on housing and density is informed by her time at the Alexandria Historical Resources Commission. While she was a part of the commission, King said it had stringent restrictions on building heights and density around homes, particularly in Old Town. She believes these restrictions helped maintain the city’s charm and attract tourists who wanted to escape the high density of larger cities.

“The money is not going to come here because there’s no reason for them to come here [if Alexandria continues over densifying],” King said. “They’ll just find another little area that is not so overpopulated.”

The flash flooding issue, which has been hitting residents throughout the city with increased frequency over the past few years, is also important to King, whose office at Daingerfield Road flooded three times in 14 months. After experiencing it herself, King said she realized just how urgent the issue is and how flooding can be a life-or-death issue for small businesses.

“The first time I didn’t mind. I said, ‘Ooh, new carpet, new everything, ooh this is beautiful,’” King said. “Second time, third time, I was just fed up.”

King’s many years of volunteering also include stints as chair of the Alexandria Regional Council of the United Way, NCA, board secretary for Agenda: Alexandria and a financial counselor at McLean Bible Church. King’s years of volunteering have helped her hone her leadership style: she said she is diplomatic, likes to listen to everyone’s perspectives and approaches city policy as “a common sense thinker.”

“I’m not the type of person who is so rigid that I can’t be persuaded if the program is something that I can see through and I feel that it is best for the city of Alexandria and its residents,” King said.

Ahead of Nov. 2, King said her campaign is “steady” and she is trying to make gradual progress over the next few weeks. She has received positive feedback from residents about her candidacy and campaign. Her campaign has relied on individual donors who King believes want a council that isn’t just one party, but is diverse in terms of thought, race and age.

King said her campaign goes back to the vision of independence that she has based her campaign around, a vision she hopes will help the city return to what she sees as its strengths.

“All I can do is tell [residents] what I can do for the city, why I want to see the difference in the city and why it’s best for the city,” King said.