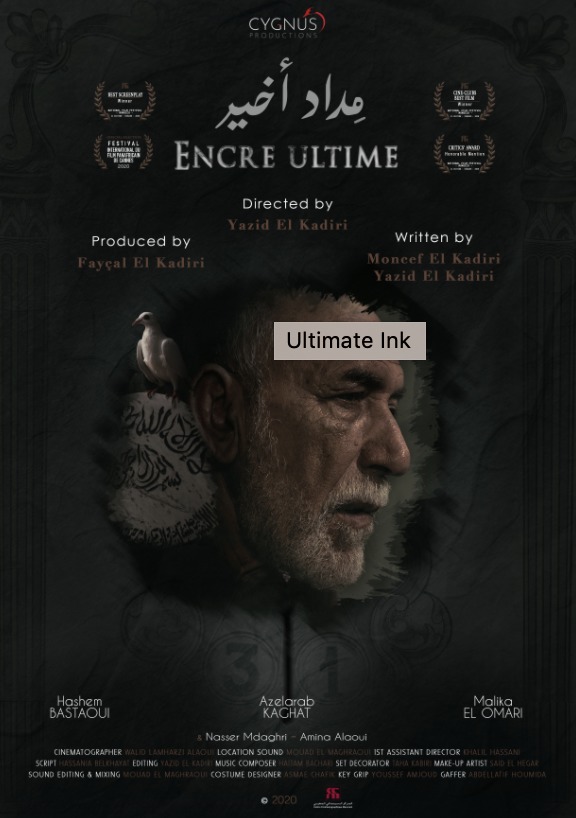 The international showcase in this year’s Alexandria Film Festival contains four films, one each from South Africa, Russia, Iran and Morocco. The Moroccan entry, “Ultimate Ink,” is a 21-minute look at coming to terms with impending mortality.

The film follows Ibrahim Ben Idriss, a 79-year-old engraver of stone markers, played with subtle sadness by Azelarab Kaghat, who is startled to receive an order for his own epitaph – with a death date of 15 days hence. The order was delivered by a mysterious stranger, who might have been the grim reaper, to Ibrahim’s young assistant Moha (Hashem Bastaoui) before Ibrahim arrived at work on the morning of Oct. 16, 2019.

Moha thinks very little of it, assuming the stranger must have confused the date and that it was just a coincidence the name was exactly that of his boss. But Ibrahim knows better.

Ibrahim ponders his impending death as he repeats his daily routines at home with his wife Meryem (Malika El Omari), who is puzzled and frightened by Ibrahim’s distant behavior and morose countenance, and walking to and from work. All of this is conveyed with few words in understated performances.

Ibrahim sets to work somewhat mysteriously writing calligraphy on a beautiful scroll. With his small granddaughter watching him with adoration, Ibrahim finishes the scroll and signs his name and the date: Oct. 29, 2019, which turns out to be the actual date of his death.

A mystical ending, in which the repeated appearance of white pigeons symbolizes the freeing of the soul, reveals that love can alter even the ultimate ink of time.

The film ends with Meryem dressed in white, sobbing while Ibrahim’s voice recites what were apparently the words on the scroll: “My adoration lasted a thousand and one coincidences. And the wanderer was destroyed by eagerness. Great is the question. Nought is my knowledge. The melodies of my body made of clay secretly conspire with the sound of my keen need. So, the love of rhymes engulfed me in my inkwell of intimate mysteries. Love was my remedy and was my ultimate ink. Great is the question. Nought is my knowledge.”

“Ultimate Ink” was directed by Yazid El Kadiri, written by Moncef El Kadiri and Yazid El Kadiri and produced by Faycal El Kadiri. It has received numerous awards during the past two years, including best film at the 2020 National Film Festival in Morocco and best picture in both the Algerian Festival of Short Movies in 2020 and earlier this year in the Tunisian Panorama International Short Film Festival.