The city’s proposals for the future of the Torpedo Factory Art Center have received criticism from artists, and during its Nov. 16 meeting, the city’s Commission for the Arts fired some warning shots as well.

The Commission for the Arts is a 16-member unpaid volunteer board appointed by City Council, whose role is in part “to advise City Council with regard to policies that will strengthen the arts and further public access to the arts and cultural matters,” according to the city’s website.

The three scenarios for changing the Torpedo Factory that are under consideration range from minor renovations to a significant overhaul of how the building is managed. Paid city staffers from the Office of the Arts will bring the proposals before City Council on Dec. 14.

One of the proposals, called “incremental revitalization,” would involve modest changes to the space, with plans to fund capital improvement projects and maintenance if money becomes available. Another scenario would shift management of the site to a private entity that would lease the art center and pay for changes.

The proposal that has received the most attention from both the city and community is known as the “custom program” and would entail the city continuing to manage the building while implementing significant changes to the space itself.

While none of the ideas laid out in the scenarios are final, the city has talked about expanding space for a ground floor restaurant and interactive artist studios, such as a glass blowing studio or tech-focused maker spaces. These changes, as laid out by the city, would require reducing the overall square footage dedicated to individual artist studios, moving ground floor artists to the upper floors of the art center.

The future of the Torpedo Factory has long been a contentious topic of conversation in Alexandria, as management of the building has changed hands between the city and the artists themselves over the years. Originally serving as a munitions factory during World War I, the building became a functioning art center in the 1970s after a group of artists convinced the city to let them renovate the dilapidated building.

City staff managed the art center for 30 of its 47 years, with the Torpedo Factory Artists Association taking over in 1998 and running operations for 12 years. Eventually in 2016, the city assumed temporary management before returning to full management in 2018 at the behest of City Council.

At the time, artists expressed fear that the city resuming control of the building would shift the Torpedo Factory’s focus away from the arts. Now, the scenarios being proposed by the city have roused some of the same concerns, resulting in fierce opposition from artists.

“If I worked for an organization calling itself the Office of the Arts and I found myself taking actions that would dismantle one of the most successful arts centers in the country, disperse its members and threaten their livelihoods and I found myself saying things like, ‘Restaurants and bars are examples of the culinary arts,’ I would have to question in what sense my organization could rightfully be called the Office of the Arts,” M. Alexander Gray, a woodcutter and engraver with a studio in the art center, said during the Nov. 16 meeting.

Last month, Gray started a petition titled “Don’t let them kick out the artists!” that has received 6,670 signatures. Gray was one of many artists and residents who spoke out against the city’s proposed scenarios during the commission’s meeting.

Artist Molley Ourada questioned whether the city’s proposed changes will improve the space for either the artists or community.

“I’m concerned that the city’s plans are not catered toward helping the local artists; they’re geared toward pushing the artists out of the way and commercializing that space,” Ourada said. “Alexandria does not need more restaurants or trinket shops selling the same Van Gogh or Matisse, umbrellas and cards. It needs the eccentric creativity the artists bring.”

Veronica Barker-Barzel, president of the Torpedo Factory Artists Association, said she felt like the artists “have been ignored and belittled in a sense,” including printmakers, whose studios were recently moved to the first floor in an attempt to increase the vibrancy and engagement of the space.

“Almost daily, when someone comes into my studio for the first time, they have this joy just coming out of them, saying how wonderful it is that they can come in and see the artists working and the artist will take their time to explain the process and how the piece is created behind the scenes,” Barker-Barzel said. “They can actually talk to someone creating something and learn from them.”

In response to the comments made by artists and community members, Diane Ruggiero, deputy director of the Department of Recreation, Parks and Cultural Activities, repeatedly emphasized that no final decision has been made about the future of the art center. The scenarios will ultimately serve as guidance for council, providing the foundation for financial models that will show council how much changes to the art center could cost the city.

“Really what we’re asking council as it relates to the scenarios is, ‘Do you want to move forward with improvements to the art center or do you not? Do you want the city to lead those initiatives or do you want it to be via a ground lease?’” Ruggiero said. “… This is a scenario developed to build a financial model around it so that council can get an understanding of how much renovations like this cost.”

Ruggiero also explained that although the ground floor changes that are being considered in the custom program would decrease the overall square footage devoted to studio spaces, the number of studios might not decrease depending on the size of the studios.

According to preliminary financial modeling done by the city, the incremental revitalization scenario would devote 58% of the site to current art uses, 34% to “building support” features, such as common spaces and stairwells, and 8% to non-art uses. The custom program and ground lease scenarios would reduce current art uses to 41% of the total art center space, with 27% devoted to building support, 16% to new art uses and another 16% to non-art uses.

Several members of the arts commission also expressed staunch opposition to the city’s proposals during its Nov. 16 meeting. 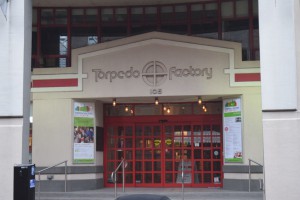 “I understand [the issues], but having no studios on the first floor I think is ridiculous. Putting in that amount of restaurant space is not needed in the city of Alexandria,” Nance said. “… This maker space feels like it’s completely [unnecessary] … on the first floor. I think glassblowing is super cool. It’s very dangerous and toxic, so I’m actually surprised to be hearing that would be going on the first floor of a super public indoor building like that.”

Commissioner Chris Kurowski brought forward the idea of listing the Torpedo Factory as a historic property on the National Registry of Historic Places. In doing so, the city would be able to place an easement on the property which would potentially provide new funding options for renovations to the site.

According to Ruggiero, prior to the Office of the Arts taking over management of the art center, the idea of a historic designation had been entertained but ultimately dismissed since the designation would limit what could be done to the building.

Meanwhile, new Commissioner Roger Yoerges suggested the city delay its presentation to council until after December to give the incoming members of council time to reconsider the issue. Ruggiero said that Mayor Justin Wilson and the current members of City Council provided explicit direction to staff during council’s June 22 legislative meeting to come forward with proposals in December.

During the June meeting, Wilson was frustrated with the pace of the project and expressed concern that the process of bringing new councilors up to speed on the project and next year’s budget season would push staff’s presentation to at least June.

Commissioner Catherine Ahern expanded the scope of the conversation, claiming that the Commission on the Arts had not been involved in this issue to the extent it should have been.

“I get it: These are scenarios, not plans. But things keep happening and will continue to keep happening without us really influencing it,” Ahern said. “I know we have certain things in our purview, but this is the most important arts thing in the city, and for us to be so disconnected from the direction that it’s going, it bothers me.”

Ahern pushed the commission to take a firmer stance with council, a view with which Commissioner Matthew Stensrud agreed, stating that the commission needs at the very least to express support for an option that allows the city to continue managing the site and not a private entity.

The commission voted unanimously to write a letter to council that supports public funding of Torpedo Factory renovations, the city’s ongoing role in managing the building and increasing the role of artists, the commission and the public in the process moving forward. The commission will meet on Dec. 7 to finalize its statement to council ahead of council’s Dec. 14 decision.