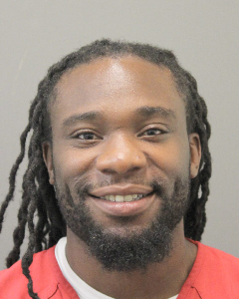 The Alexandria Police Department is asking for the public’s assistance in locating a man who is wanted for multiple suspected criminal offenses in Alexandria and other jurisdictions, including assaulting an Alexandria police officer with his vehicle.

APD responded to a call for service in the 2400 block of Mandeville Lane at approximately 6:18 p.m. on Monday after receiving a report of an armed individual involved in a domestic dispute, according to a news release. Officers were able to locate the suspect, Nnanyereugo Onuoha, in the 200 block of Swamp Fox Road.

As Onuoha fled the scene, he struck one officer with his vehicle and another officer was injured while trying to avoid being hit by the suspect, according to the release. Both officers were transported to Fairfax Hospital with non-life-threatening injuries and have since been treated and released.

Onuoha is wanted for assault and battery on law enforcement, hit-and-run, and he is wanted in several other jurisdictions for various other offenses, according to the release. Onuoha is known to drive a newer model Black Honda Pilot with Maryland tags 1EV8163. There may be damage to the lower molding of the vehicle.

APD asks that anyone with information on Onuoha’s whereabouts or with knowledge of these incidents to please contact Investigator Matt Barnickle at 703-859-5150, or via email at [email protected] or to call APD’s non-emergency number at 703-746-4444. Tips can be anonymous.