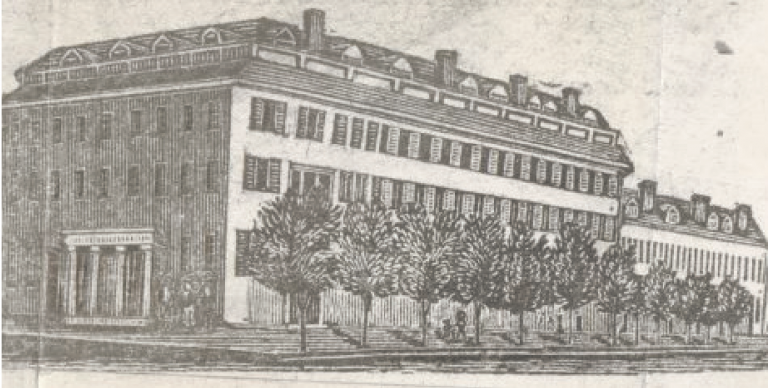 Alexandria might have little to do with the creation of Flag Day, but do you know how our city connects to the writing of our national anthem? While accounts differ on the origin of the design of the American flag and the origin of Flag Day, the poem written by Francis Scott Key titled “The Defence of Fort M’Henry,” is acknowledged as the basis for our national anthem. And Alexandria had a part to play in the writing of that poem.

Accounts differ about the design of the first American flag as we now know it. While tradition held that it was first designed and sewn by Betsy Ross, current research favors the claim of Francis Hopkinson, a delegate to the Continental Congress from New Jersey, as the designer of our original flag.

Like the disagreement about the origin of our flag, there are competing stories about the origin of Flag Day. The Wisconsin educator Bertrand Cigrand petitioned Congress repeatedly to declare June 14 as Flag Day, starting in 1885. In 1889, Professor George Bloch, the principal of a free kindergarten in New York City, instituted the observance of Flag Day on June 14, a tradition followed by all public schools in New York from then on.

Thanks to the efforts of the Society of Colonial Dames, Pennsylvania was the first and still only state to observe Flag Day as a holiday, starting in 1937. While Woodrow Wilson, in 1916, and Calvin Coolidge, in 1927, issued presidential proclamations on Flag Day, Congress approved the national observance of the day in 1949 but did not establish it as a holiday.

Although Alexandria cannot lay claim to either the design of the U.S. flag or to the origin of Flag Day, it did contribute to the birth of our national anthem by delaying the British navy in 1814. The delay allowed Fort McHenry to reinforce its defenses and inspired Francis Scott Key to pen his poem. The five-day occupation of Alexandria, starting on August 29, 1814, in which city officials surrendered to the British forces in exchange for not destroying the city, delayed the British arrival in Baltimore and contributed to Fort McHenry’s ability to defend itself.

The American forces respected the cease-fire in Alexandria, but as the British ships sailed south to Belvoir Neck, the site of Fort Belvoir today, they fired artillery at the British from an elevated position. While the ensuing “Battle of White House Landing” – named after a nearby building, and not the United States’ President’s residence – did not sink a single British ship, the damage done to the British fleet forced the British to delay their arrival at Fort McHenry. Francis Scott Key’s lines “The rockets’ red glare, the bombs bursting in air” reference shots from the very same ships that had left Alexandria more than a week earlier.

After being released by the British, Key checked into the Indian Queen Hotel in Baltimore, run by John Gadsby, the former owner of the Alexandria City Hotel, now known as Gadsby’s Tavern Museum. Key finished penning the four verses that now make up “The Star-Spangled Banner” at the Indian Queen Hotel.

For more information on Alexandria and the War of 1812, please visit https://www. alexandriava.gov/1812.