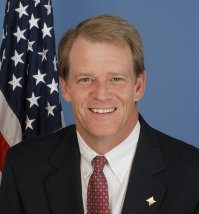 Donley served as mayor of Alexandria from 1996-2003, and as Chairman of the Democratic Party of Virginia. He was first elected to Alexandria’s City Council in 1988 a role he relinquished when he was elected mayor.

Donley graduated from Marquette University in 1979, with majors in Political Science and English, according to LinkedIn.

Donley was named an Alexandria Living Legend in 2017. He received a lifetime achievement aware from Volunteer Alexandria in 2016, and was named to Carpenter’s Shelter Wall of Honor in 2015, according to LinkedIn.

He is survived by his wife, Eva Shamblin, five daughters and grandchildren.

We will provide updates on arrangements as more information becomes available.