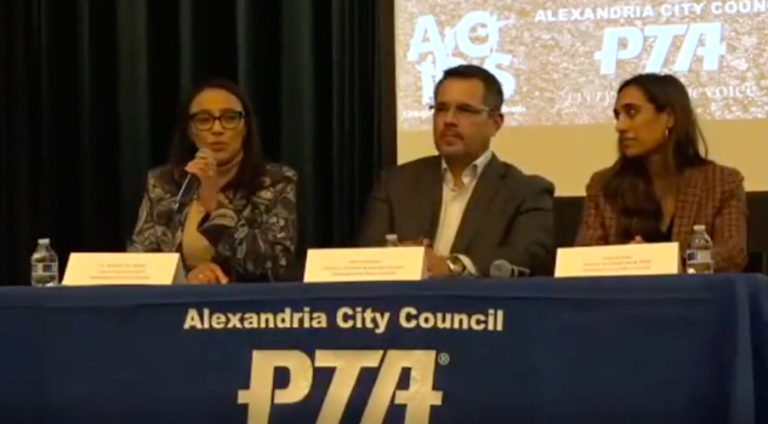 Alexandria City Public Schools officials and district parents discussed school safety last week during a public forum at George Washington Middle School, in which they covered topics such as the district’s partnership with the Alexandria Police Department and how families can work with ACPS to keep students safe.

School safety has been a hot-button issue in the community for some time. Last week’s event follows multiple safety-related incidents in the district, including the stabbing of an Alexandria City High School student in May and numerous student arrests. ACPS has also come under fire by some parents for its controversial school resource officers program, which was removed and subsequently reinstated.

At the top of the forum, Kay-Wyatt emphasized to attendees that maintaining safety in schools is a “top priority to ensure that [the] students and staff feel welcome, supported and safe in all … school buildings.”

Kay-Wyatt also said that collaboration between parents and ACPS is integral to maintaining safe schools. This means remaining aware of ACPS’ security measures and reporting any and every concern to staff.

“I hope that it’s apparent that everyone in our community … has a role to play in our collective safety and security,” Kay-Wyatt said. “I ask families to partner with us. You can support our efforts by staying up to date on our Alexandria City Public Schools staff and student well-being, safety and security measures, and ensuring that your students and families comply with all of our requirements.”

During the forum, panelists discussed specific measures ACPS has taken to bolster physical school security. According to Contreras, the district has installed a new visitor management system, called Raptor, which offers more robust capabilities for emergency management when schools run emergency drills. He also said that 15 schools have new security camera systems, with the three remaining schools nearing completion, and that all campuses are now equipped with a new intrusion system that is activated after everyone exits the building for the day.

Jackson spoke to ACPS’ commitment to social emotional learning and wellness, during which she highlighted the importance of prioritizing “connection before content.”

“What that really means is that we recognize the power of positive relationships, increasing youth engagement in schools, and increasing overall social emotional wellness,” Jackson said.

This is done through the district’s multi-tiered systems of support, or tiered interventions. The tier one level gives every student 30 minutes of social emotional academic learning, or SEAL, time per day. The tier two level recognizes that some students need additional support and offers resources like support teams as well as school psychologists, nurses, social workers and counselors. The tier three level is more individualized, looking at specific needs of the student. Examples of tier three support might include one-on-one support, more intensive behavior supports and intervention plans or a connection to community resources.

Several city officials spoke at the discussion as well, such as Sandoval, a police officer who was recently placed at Francis Hammond Middle School.

“It does take a village. It can’t just be the police or just any one unit. We all have to work in partnership for the betterment of our children,” Sandoval said.

Sandoval commented on his personal experience as an officer in schools and the arch of his relationship with students. Initially, he said he was met with skepticism and reservations, but over time students began to warm up to him. Many now call him “poli” as a term of endearment, or run up to give high fives.

Students also tell Sandoval about issues they’re struggling with, he said, and often engage in conversations. One student recently came up to him and told him about a challenge she faced over the weekend.

“I offered some support, said, ‘Go talk to your counselor and they’ll be able to better assist you than I can, but I’m always here willing to listen,’” Sandoval recalled. “Yes, I wear a uniform, and yes, I’m there to keep the children and staff safe … but there’s also the relationship we have with the children, and that’s been very rewarding.”

The SROs were defunded in summer 2021 and reinstated in October 2021 when school officials advocated for the return following various violent incidents. The SRO program is funded through June 2023, and proposed plans for what happens to SROs after then will be presented to the School Board by the School Law Enforcement Partnership advisory group in December.

Panelists also answered audience questions, one of which was about gang awareness and collaboration between the gang task force and ACPS. Percy White, the city’s gang prevention coordinator, said that “crews,” which are similar to gangs in terms of criminal behaviors without the official title, are prevalent in Alexandria.

“We work and are in contact with folks up at the high school, and have collaboration and talk about certain concerns they may have regarding students. We work closely with them,” White said, but did not specify how exactly the two collaborate.

Another question inquired about the number of APD officers and non-APD security personnel at certain schools. Sandoval said that there is one APD police officer at George Washington Middle School, one at Francis Hammond, one at Minnie Howard and two at ACHS.

Contreras clarified that ACPS utilizes “detail officers,” paid for by ACPS, who handle traffic matters and traverse from school to school, depending on where they’re needed. Detail officers remain on the exterior of the building, while SROs interact with those mostly inside the building.

He also stated that ACPS does not provide specific details or information regarding how many school security officers are placed at each building. Kay-Wyatt echoed this sentiment.

The discussion also touched on the possibility of metal detectors, which Contreras said is on the table but not set in stone; the status of walk audit reports, which Carroll said are available on the city’s website, and those that are not completed yet will be done before summer 2023; and the student to guidance counselor ratio, which Jackson said is currently unavailable but within the standards of quality requirement.

When asked how the school system is doing this year compared to last year, Contreras said that August through September were “at a lesser pace than last year as far as overall incidents.” Kay-Wyatt said that ACPS is always working to notify parents about specific incidents that occur on school grounds through ACPS’ communications platform ParentSquare, which translates messages in various languages.