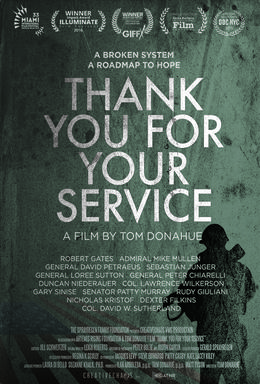 “Thank You For Your Service,” a war documentary directed by Tom Donahue and produced by Ilan Arboleda, is a tragic and mesmerizing piece of art from start to finish.

The film opens with an audio recording of a woman screaming in a recorded police call about a war veteran who has just committed suicide, immediately thrusting the viewer into the center of the scene. It doesn’t let up until the credits roll.

Over the course of the film, Donahue weaves together a kaleidoscope of interviews, anecdotes, videos and photos to illustrate how trauma affects those returning from war, and how the United States’ mental health system is not built to sustain the growing crisis.

Featured in “Thank You For Your Service” are the stories of several veterans who served in Iraq and their subsequent tribulations upon returning home and attempting to assimilate back into society. All of their stories are utterly gut-wrenching, and the film does not shy away from recounting very specific anecdotes. For instance, one veteran, Phil Straub, watched his friend get hit by tracer ammunition and burn to death during the Second Battle of Fallujah, one of the most violent conflicts of the Iraq war. Another, Lu Lobello, killed three male members of an Iraqi family in an attempt to protect his fellow soldiers in a fire fight during the invasion of Baghdad. Both now struggle with various forms of war trauma that have significantly impacted their day-to-day lives.

Through potent interviews with veterans, psychologists and politicians, the film ultimately makes the argument that the country’s current policies are not doing nearly as much as they could – and should – to care for soldiers’ mental health, despite an increasingly desperate need for services. In fact, the U.S. Department of Veteran Affairs reports 22 suicides a day, according to the film. The sobering fact is both devastating and emboldening at the same time, and results in a blistering anger toward the U.S. government – as was clearly Donahue’s intent.

But he makes sure to imbue an element of hope as well. Donahue highlights a private non-profit organization called Save A Warrior that works to heal veterans and assimilate them back into society through a “reintegration boot camp.” At the end of the film, a nail-biting scene features one veteran climbing the top of a pole in front of his fellow veterans during an exercise that reintroduces the protective factor of fear of the pain of death as part of the bootcamp. At one point it is unclear whether he’s going to make it, but he ultimately does, leaving the viewer with a sense of pride and relief.

“Thank You For Your Service” adds a question mark to the end of that phrase. It asks the viewer to carefully ponder what thanking a veteran for their service actually means, and what can be done to add more weight to the statement. After watching the film, it’s clear there is still a long way to go.