“Vagabond” is a psychological thriller written and directed by JC Andreu, a short film showcased at the Alexandria Film Festival. Andreu was inspired by urban legend, The Tale of the Man from Taured.

He also drew inspiration from personal experience when he was forced to stay in America due to travel restrictions and border closures in the early stages of the COVID-19 pandemic in 2020. “I was on the phone with my mother and she said ‘Just stay there,’” Andreu said.

“That felt really weird. There’s a global pandemic and you’re just supposed to stay away from your roots and everything,” he said.

The film follows Vincent Martinet, an international student from Bordeaux, France who comes to the U.S. to attend college.

Andreu began his writing process focusing on the story over the visual components.

“I make sure it’s striking and airtight and as I do that, the natural pace coming through informs the tone and therefore the cinematography, music, etc.,” he said.

A vast darkness swallows the audience as the opening scenes pan across the screen heightening the paranoia Vincent is staving away. Vincent, played by Isaac Liu, is an anxious young man who arrives at customs and presents his passport to the border control agent at the desk. The agent asks Vincent a series of routine questions like “Where are you from? What is the purpose of your trip to the United States?”

He calmly answers her questions and receives inquisitive looks in return only to find out the passport is void. France does not exist. The music begins to beat louder echoing the fear Vincent experiences.

Stumbling through his thoughts he scratches at the walls of his own understanding. Fully formulated thoughts that were once the foundation of everything he’s ever known crumble to dust at his feet. The score within the film can be like a compass, guiding the story and uncovering emotions that Andreu aims to evoke.

Vincent is trapped, confused, alone. The quiet darkness echoes his helpless state. He is alienated in a foreign country and the resources he depended on to aid him are rendered useless. 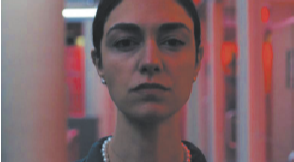 Agent Reynhart, played by Alexandra Milewich, is a member of the organization that has detained Vincent. She is the ‘face’ of their operation and the last person that is shown speaking to Vincent before he is locked captive in the empty room.

Against her rigorous training, Agent Reynhart makes the critical error of mistaking Vincent’s home, Bordeaux, for its northern counterpart, Paris, exonerating the interrogation process she had been previously performing.

Agent Reynhart looks directly into the camera in the corner of the room and apologizes profusely to someone unknown. It is a jarring scene from the 12-minute film alluding to the insignificance of her power and how she herself is merely a pawn.

A sea of red light bounds through the hallway in waves, a hallway hosting a series of identical doors with a variety of languages scrawled onto the doors. He is not alone. “Welcome to the United States of America,” Agent Reynhart says and kicks Vincent’s outstretched hand.

When watching this film, Vincent is portrayed as a relatable protagonist and throughout the storyline it becomes increasingly difficult to not encourage his escape. His alienation may resonate with many people who have felt chronically misunderstood, like a castaway or a disposable piece of a machine.