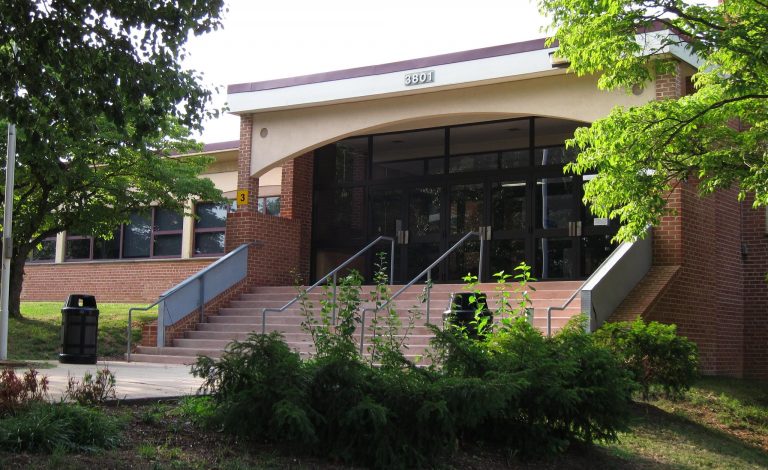 A fight at the Minnie Howard campus of Alexandria City High School on Monday resulted in three students being arrested for obstruction of justice. Videos of the melee, along with publicly available police, EMT and school audio communications reveal a dangerous situation in which one school administrator was knocked to the ground trying to restore order while others frantically and exasperatedly tried to gain control of the situation.

Two parents and a former contract employee who worked at Minnie Howard last year raised numerous concerns in interviews with the Times. The parents spoke on the condition of anonymity because they have children currently attending Minnie Howard and feared retribution. The contract employee did not want her full last name used for safety reasons. In the interviews, one parent claimed that newly implemented security measures aren’t being followed, while another said there’s a perception that ACPS no longer expels students who are chronically violent. The contract employee described the Minnie Howard campus as a scene out of “Lord of the Flies.”

The Times twice reached out to the ACPS communications office for comment from Interim Superintendent Melanie Kay-Wyatt, Ed.D on whether student identifications are being checked at Minnie Howard and elsewhere, on the ACPS expulsion policy and on the well-being of the administrator who appeared to be injured in the fight, but did not hear back in time for our print deadline. Requests for comment from two school board members and two members of the Parent Teacher Association board also went unanswered.

The first emergency recording about the fight was the dispatch for help at 11:31:29 a.m.

“Can you start [indistinct] to Minnie Howard right now? Direct. Where do you want him to meet you? If you can, have him go to the cafeteria side. It’s in the back of the building. Direct.”

Calls came into dispatch two minutes later from a staff member and an apparent student at Minnie Howard from inside the cafeteria.

11:33:11 A frantic female voice: “We need support in the cafeteria please.” A male voice: “Ten-four, we’re sending someone down in a minute.”

“SR12 to the units coming to Minnie Howard. You can go ahead and step it up.”

Just 12 seconds later numerous voices were heard on one call, as the situation reached its climax.

“SR12, confirm you have units coming priority. Have them coming priority, sir.” A different voice responds: “They won’t open the door. We’re trying to open the back door.”

The situation seemed to subside, then a few minutes later, from 11:40:30 to 11:41, communications from within Minnie Howard by different staff members revealed that fighting had resumed.

There’s also an EMT dispatch of an ambulance to Minnie Howard.

“Ambulance 410, engine 203, you’re responding to 3801 West Braddock Road, cross street Stadium Drive, gonna be at Minnie Howard, secondary school, for a 15-year-old male complaining of stomach pains from an assault. The scene is going to be warm and the entrance is going to be the cafeteria area. 11:49.”

Numerous videos have also been circulating that show what was taking place inside the Minnie Howard cafeteria as these dispatch calls were flying. One video, which was used in a Fox Five DC report, shows a man that, based on appearance and parent reports, looks to be Assistant Principal Robert Bowes temporarily restoring calm before he was knocked to the ground when the fight erupted again.

A second video begins just as the man who appears to be Bowes is knocked to the ground, but then sweeps to the left, showing students being crashed into tables, punching and flinging each other around, while a group of students is seen repeatedly punching another child who is lying defenseless on the ground, with their arms over their head. Order is finally restored when a large man wades into the melee and begins pulling students apart.

The Alexandria Police Department told numerous media outlets that there were no injuries in the fight, although an ambulance was dispatched for the student with stomach pain. Video evidence also clearly shows that an adult was knocked to the ground, and subsequent reports by parents – some made directly to the Times and some posted on social media – were that Bowes was seen bleeding from the head.

APD Public Information Officer Marcel Bassett did not comment on the status of the administrator, but said in an email that “Medics were called to the scene to ‘check’ everyone over but no one was transported nor wanted to be transported to the hospital.” Bassett did not reply to a further request to define what APD means when it uses the word “injured.”

One parent expressed frustration in an interview at the seeming intransigence of the violence problem within ACPS overall and Minnie Howard in particular. “Jordan” – not their real name as the parent requested anonymity – said it appears that students who have repeated incidents of violence are placed back into schools, sometimes following a brief suspension, and that nothing changes and the behavior is repeated.

“I just feel totally impotent as a parent. How are these kids [who repeatedly cause trouble] sent back to school? I don’t think ACPS expels students any more. … We have kids in school who are so ill-behaved that they need a security guard to escort them to the bathroom,” Jordan said, and provided a recording of a call being made for a security guard to escort a student to the bathroom.

Jordan said the topic some people do not want to discuss – gangs – has to be addressed if ACPS is to become both a safe environment and one conducive to learning.

“How can we tackle the gang/crew problem in our schools if we don’t have open dialogue about the reality of it? And we know it exists,” Jordan said. “We don’t want honest dialogue in this community. We want filtered and messaged dialogue among parents. And I don’t know where that comes from.”

Jordan was also upset that leaders of the school system, including Interim Superintendent Melanie Kay-Wyatt and the School Board, have not taken a visible leadership role in addressing these problems.

Alexandria City Public Schools has held a series of school safety-related forums recently, the most recent of which took place in October. The event, which was hosted by ACPS, the Alexandria Council of PTAs and Parents for Safe Schools and Parents for Safe Schools, covered topics like the district’s partnership with APD and how families and ACPS can work together to ensure student safety.

But many community members believe forums are not enough. “Why haven’t we heard from anyone on the School Board? Elected members of the School Board should be aghast at what happened yesterday,” Jordan said.

Another Minnie Howard parent, “Pat,” who also didn’t want their real name used, said Minnie Howard is not following the new security measures implemented for this school year to reduce violence in ACPS. Students in ACPS middle schools and the two campuses of Alexandria City High School were supposed to show their school-issued identification upon entering school buildings to prevent unauthorized people from accessing the schools.

“They also no longer check student IDs when entering the building. This was one of the security enhancements for this year,” Pat said. “Parents were never informed that IDs were no longer being checked.”

A short-term contract employee, Tammi G., who worked at Minnie Howard for a month back in September-October 2021, said she was verbally abused by students with vulgar insults on a daily basis and was physically assaulted by a female student on one occasion. Tammi worked for the company Temporary Solutions, which had a contract with ACPS. She worked as a monitor at Minnie Howard, sometimes in the hallway, sometimes in the auditorium and sometimes even in classrooms.

“I was just shocked. … In my mind, I saw a ticking time bomb [at Minnie Howard]. One day there were like seven kids who would not do what they were supposed to. I tried to get on the phone to call the front office to help me. The phone didn’t work. The intercom didn’t work. I had to flag down a security officer. There were several incidents like that.”

Tammi said she was punched by a female student after asking a group of rowdy students in the auditorium to lower their voices. When she asked one particular student to stop going in and out of the auditorium, which they weren’t supposed to do during the extended “Lunch & Learn” program, the student responded by saying “F.U. Bi – – -”

“I said, ‘No, you’re not going to talk to me this way.’ She turned around and karate chopped me across my breastbone. I never touched her. I never cursed at her. I was very upset. I didn’t suffer an injury, but she assaulted me,” Tammi said. “I said ‘This is just out of control. This is like ‘Lord of the Flies.’”

‘A constant state of chaos’

The frustration of staff and administrators at the Minnie Howard campus on Monday is apparent in the audio communications available on openMHz.com.

At 11:48:10, a call appears to have come from ACPS headquarters to Minnie Howard. The male voice from headquarters said, “Can you advise on the police presence on your campus?” A frustrated male voice responds: “Right now we are busy trying to clear our hallways. We just had a major fight in the cafeteria and the police are all here and we’re just trying to get our kids back in their room and then we’ll follow up. … We got about 30 kids on main street. [Woman yelling] Turn around and go back! Turn around and go back!”

[Female voice] “Can I get an available security monitor near main street? Teacher says they need assistance on main street.” [Frustrated man] “Security, I need you to round every student that you see in the hallway and escort them to the auditorium. Because I’m going to send them home. They’ve had plenty of warnings and these students, round them up and take them to the auditorium.”

Jordan said they believe the current chaos is a result of “years of poor decision-making,” including “degrading the school experience for everyone.”

“This is insane. The fact that this is acceptable is insanity,” Jordan said. “And the fact that there’s no solution. I’m feeling pretty defeated. Right? Because we’re not getting a second high school. No one’s talking about the discipline system. We just have to accept that our kids go to these schools that are in a constant state of chaos.”