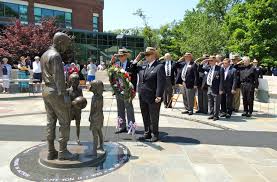 Alexandria’s Department of Recreation, Parks and Cultural Affairs and the “Friends of Rocky Versace” will honor all veterans at the Mt Vernon Recreation Center at 2701 Commonwealth Ave. Alexandria, Virginia 22305. The program will include a recognition of all veterans in attendance, acknowledgement of Gold Star family members, a wreath laying and patriotic songs by the Alexandria Harmonizers. Outside the Center’s entrance is the Captain Rocky Versace Plaza and the Vietnam Veterans Memorial honoring 68 Alexandrians who died or remain Missing in Action during the Vietnam War. Versace lived in Alexandria while growing up and was posthumously awarded the Medal of Honor in 2002 for sustained heroism during two years of captivity by the Viet Cong which ended with his execution in 1965.